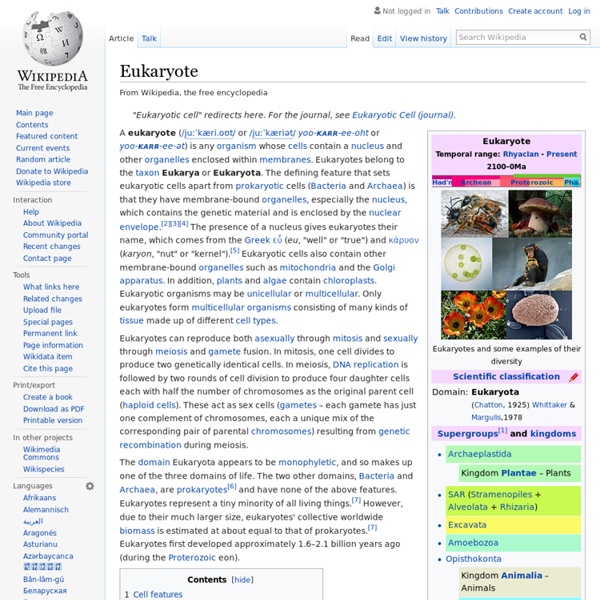 Eukaryotes can reproduce both asexually through mitosis and sexually through meiosis and gamete fusion. In mitosis, one cell divides to produce two genetically identical cells. In meiosis, DNA replication is followed by two rounds of cell division to produce four daughter cells each with half the number of chromosomes as the original parent cell (haploid cells). These act as sex cells (gametes – each gamete has just one complement of chromosomes, each a unique mix of the corresponding pair of parental chromosomes) resulting from genetic recombination during meiosis. Cell features[edit] Eukaryotic cells are typically much larger than those of prokaryotes. Internal membrane[edit] Detail of the endomembrane system and its components A 3D rendering of an animal cell cut in half. The nucleus is surrounded by a double membrane (commonly referred to as a nuclear membrane or nuclear envelope), with pores that allow material to move in and out. Vesicles may be specialized for various purposes. Related:  Other GMO Research

Mitochondrion Two mitochondria from mammalian lung tissue displaying their matrix and membranes as shown by electron microscopy History[edit] The first observations of intracellular structures that probably represent mitochondria were published in the 1840s.[13] Richard Altmann, in 1894, established them as cell organelles and called them "bioblasts".[13] The term "mitochondria" itself was coined by Carl Benda in 1898.[13] Leonor Michaelis discovered that Janus green can be used as a supravital stain for mitochondria in 1900. In 1939, experiments using minced muscle cells demonstrated that one oxygen atom can form two adenosine triphosphate molecules, and, in 1941, the concept of phosphate bonds being a form of energy in cellular metabolism was developed by Fritz Albert Lipmann. The first high-resolution micrographs appeared in 1952, replacing the Janus Green stains as the preferred way of visualising the mitochondria. In 1967, it was discovered that mitochondria contained ribosomes. Structure[edit]

Eumetazoa Eumetazoa (Greek: εὖ [eu], well + μετά [metá], after + ζῷον [zóon], animal) is a clade comprising all major animal groups except sponges, placozoa, and several other obscure or extinct life forms, such as Dickinsonia. Characteristics of eumetazoans include true tissues organized into germ layers, and an embryo that goes through a gastrula stage. The clade is usually held to contain at least Ctenophora, Cnidaria, and Bilateria. Whether mesozoans and placozoans belong is in dispute. Some phylogenists have speculated the sponges and eumetazoans evolved separately from single-celled organisms, which would mean that the animal kingdom does not form a clade (a complete grouping of organisms descended from a common ancestor). Eumetazoans are a major group of animals in the Five Kingdoms classification of Lynn Margulis and K. Taxonomy[edit] However, many skeptics emphasize the pitfalls and inconsistencies associated with the new data. Evolutionary origins[edit] References[edit] Bilateria.

Mitochondrial DNA Electron microscopy reveals mitochondrial DNA in discrete foci. Bars: 200 nm. (A) Cytoplasmic section after immunogold labelling with anti-DNA; gold particles marking mtDNA are found near the mitochondrial membrane. (B) Whole mount view of cytoplasm after extraction with CSK buffer and immunogold labelling with anti-DNA; mtDNA (marked by gold particles) resists extraction. Mitochondrial DNA (mtDNA or mDNA)[2] is the DNA located in organelles called mitochondria, structures within eukaryotic cells that convert chemical energy from food into a form that cells can use, adenosine triphosphate (ATP). In humans, mitochondrial DNA can be assessed as the smallest chromosome coding for 37 genes and containing approximately 16,600 base pairs. Origin[edit] Nuclear and mitochondrial DNA are thought to be of separate evolutionary origin, with the mtDNA being derived from the circular genomes of the bacteria that were engulfed by the early ancestors of today's eukaryotic cells. Male inheritance[edit]

GMO Human Embryos Have Already Been Created A meeting at the FDA on experiments to create GMO humans has brought disturbing information to light. Action Alert! Today, the US Food and Drug Administration held day one of a public meeting outlining the creation of genetically modified humans. These experiments won’t take place in the distant future. Specifically, the FDA is discussing the genetic manipulation of human eggs and embryos in order to prevent inherited mitochondrial disease and treat infertility. While the FDA has stated that the agency “recognizes” that there are “ethical and social policy issues” to be considered—and despite the fact that forty-four countries have already banned this kind of genetic manipulation—the FDA won’t bother to discuss if human clinical trials should take place (that’s considered to be “outside the scope” of the meeting). Some mutations in mtDNA can trigger mitochondrial disease, which can then be passed from mother to child (but not father to child). Sex selection. Action Alert!