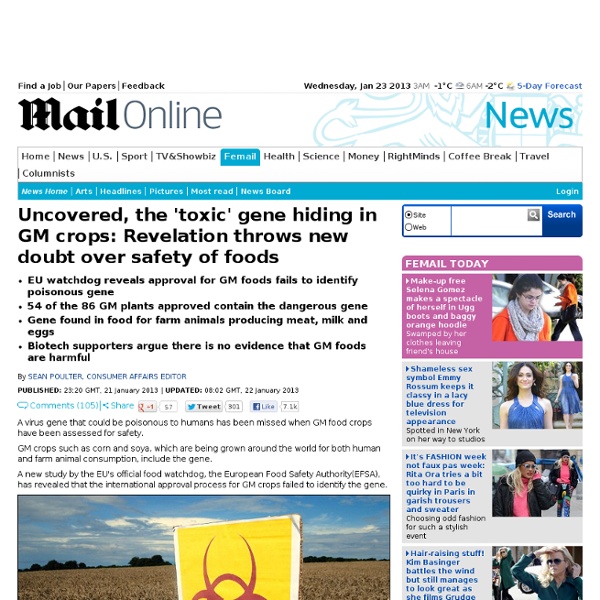 EU watchdog reveals approval for GM foods fails to identify poisonous gene54 of the 86 GM plants approved contain the dangerous geneGene found in food for farm animals producing meat, milk and eggsBiotech supporters argue there is no evidence that GM foods are harmful By Sean Poulter, Consumer Affairs Editor Published: 23:20 GMT, 21 January 2013 | Updated: 11:03 GMT, 24 January 2013 A virus gene that could be poisonous to humans has been missed when GM food crops have been assessed for safety. GM crops such as corn and soya, which are being grown around the world for both human and farm animal consumption, include the gene. A new study by the EU's official food watchdog, the European Food Safety Authority(EFSA), has revealed that the international approval process for GM crops failed to identify the gene. A new study conducted by the EU has shown that standard tests for GM foods may be missing a potentially poisonous gene for humans Related:  GMO

The Four Steps Required to Keep Monsanto OUT of Your Garden Seed catalogs for the 2014 growing season are arriving in mailboxes across the Northern Hemisphere with home gardeners everywhere starting to plan which seeds they will sow in their spring gardens. A positive trend in recent years is the growing number of gardening enthusiasts choosing to plant gardens using organic and/or heirloom seeds. What most of these home gardeners don’t realize is that corporate behemoth and GMO titan Monsanto has been gobbling up the seed market faster than a caterpillar can munch a tomato plant! With one fell swoop in 2005, Monsanto grabbed approximately 40% of the US vegetable seed market with its acquisition of Seminis. This means that a home gardener could unknowingly be supporting the development and proliferation of genetically modified crops if the seeds used are from Seminis. Does this mean that even if you buy organic or heirloom seeds from a completely independent company some of your purchase might be supporting the bad guys? Yes, it does. Surprise!

GMO Myths and Truths Genetically modified (GM) crops are promoted on the basis of a range of far-reaching claims from the GM crop industry and its supporters. They say that GM crops: Are an extension of natural breeding and do not pose different risks from naturally bred crops Are safe to eat and can be more nutritious than naturally bred crops Are strictly regulated for safety Increase crop yields Reduce pesticide use Benefit farmers and make their lives easier Bring economic benefits Benefit the environment Can help solve problems caused by climate change Reduce energy use Will help feed the world. However, a large and growing body of scientific and other authoritative evidence shows that these claims are not true. On the contrary, evidence presented in this report indicates that GM crops: Download a PDF of the full GMO Myths and Truths report

How Chemicals Change Us A widely used herbicide acts as a female hormone and feminizes male animals in the wild. Thus male frogs can have female organs, and some male fish actually produce eggs. In a Florida lake contaminated by these chemicals, male alligators have tiny penises. These days there is also growing evidence linking this class of chemicals to problems in humans. Philip Landrigan, a professor of pediatrics at Mount Sinai School of Medicine, says that a congenital defect called hypospadias — a misplacement of the urethra — is now twice as common among newborn boys as it used to be. Endocrine disruptors are everywhere. In this campaign year, we are bound to hear endless complaints about excessive government regulation. Last month, the Endocrine Society, the leading association of hormone experts, scolded the Food and Drug Administration for its failure to ban bisphenol-A, a common endocrine disruptor known as BPA, from food packaging. Big Chem says all this is sensationalist science.

Robbie Gennet: Donald Rumsfeld and the Strange History of Aspartame Yes, that Donald Rumsfeld, the "knowns and unknowns" guy who remarkably executed some of the worst decisions in American foreign policy and got a medal for it. I have been reading up on this strange chapter in the history of Donald Rumsfeld and have learned two things. One, the chemical additive aspartame is very potentially a cancer and brain tumor-causing substance that has no place in our food. Dr. In the peer reviewed journal, Aspartame: Methanol and the Public Health, Dr. Martini says NutraSweet is a "deadly neurotoxic drug masquerading as an additive. So how does Donald Rumsfeld fit in to all this? In 1985, Monsanto purchased G.D. Ronald Reagan was sworn in as president January 21, 1981. One of Hayes' first official acts as FDA chief was to approve the use of aspartame as an artificial sweetener in dry goods on July 18, 1981. Here's the kicker: When Searle was absorbed by Monsanto in 1985, Donald Rumsfeld reportedly received a $12 million bonus, pretty big money in those days.

10 reasons why we don’t need GM foods Monsanto: herbicide powerhouse Tom Philpott GRIST, 16 Sep 2008 *The GMO seed giant expects Roundup to generate $1.8 billion in profits in 2008 Monsanto positions itself as a green company. "Using the tools of modern biology," its website informs us, "we help farmers grow more yield sustainably so they can produce more and conserve more." Compare that twaddle to this bit from Monsanto's announcement on Tuesday: "[Monsanto's Chief Financial Officer Terry] Crews will indicate that Monsanto's Roundup and other glyphosate-based herbicides business is on track to be above $1.9 billion of gross profit for the 2008 fiscal year, ahead of the previous forecast." Wow. But the company isn't just churning out profit by peddling weed-killer. "Crews will also note that for the 2008 fiscal year, the company's corn business should exceed $2 billion in gross-profit generation for the first time." Interesting.

What's really in the food? The A to Z of the food industry's most evil ingredients (NaturalNews) Ever wonder what's really in the food sold at grocery stores around the world? People keep asking me, "What ingredients should I avoid?" So I put together a short list that covers all the most toxic and disease-promoting ingredients in the food supply. These are the substances causing cancer, diabetes, heart disease and leading to tens of billions of dollars in unnecessary health care costs across America (and around the world). If you want to stay healthy and out of the hospital, read ingredients labels and make sure you avoid all these ingredients: Acrylamides - Toxic, cancer-causing chemicals formed in foods when carbohydrates are exposed to high heat (baking, frying, grilling). Aspartame - Chemical sweetener that causes neurological disorders, seizures, blurred vision and migraine headaches. Autolyzed Proteins - Highly processed form of protein containing free glutamate and used to mimic the taste-enhancer chemical MSG. Casein - Milk proteins. Read NaturalNews.

Genetically Modified Soy Linked to Sterility, Infant Mortality "This study was just routine," said Russian biologist Alexey V. Surov, in what could end up as the understatement of this century. Surov and his colleagues set out to discover if Monsanto's genetically modified (GM) soy, grown on 91% of US soybean fields, leads to problems in growth or reproduction. What he discovered may uproot a multi-billion dollar industry. After feeding hamsters for two years over three generations, those on the GM diet, and especially the group on the maximum GM soy diet, showed devastating results. And if this isn't shocking enough, some in the third generation even had hair growing inside their mouths—a phenomenon rarely seen, but apparently more prevalent among hamsters eating GM soy. The study, jointly conducted by Surov's Institute of Ecology and Evolution of the Russian Academy of Sciences and the National Association for Gene Security, is expected to be published in three months (July 2010)—so the technical details will have to wait. Preliminary, But Ominous

ngin: FARMING NEWS New U.S. Wheat Associates' Report A new U.S. Wheat Associates' report found that all representatives for Chinese, Korean and Japanese wheat buyers surveyed would not buy or use [GM] Roundup Ready wheat and that 82% of buyers from Taiwan and 78% of buyers from South Asia said they would reject the wheat that Monsanto has developed. 100 per cent of the Japanese buyers indicated that "regardless of government approval, contracts will stipulate no adventitious presence of GM wheat." Japan is the largest buyer of US wheat. For more on the report "Trusting Monsanto to decide when there's enough acceptance out there would be a foolish mistake. "I am going to ask you not to grow genetically modified wheat until we are able to sell the bread made from that wheat... if you do grow genetically modified or enhanced wheat, we will not be able to buy any of your wheat -neither the GM nor the conventional." - Rank Hovis, in the North Dakota Wheat Commission's newsletter. GM crop data was not so rosy