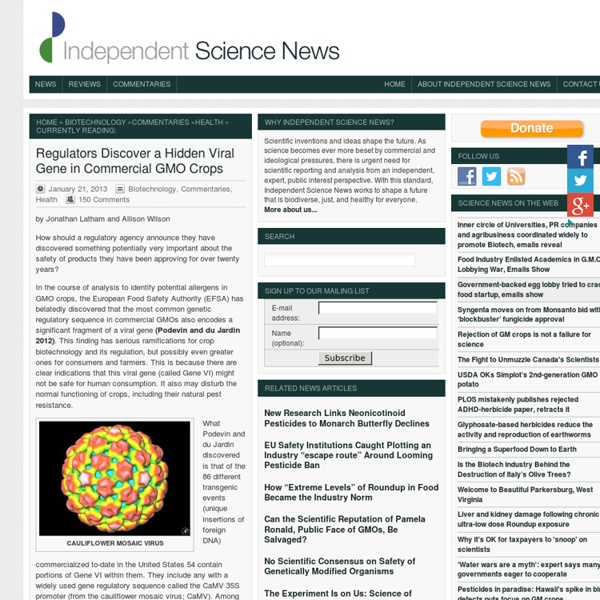 by Jonathan Latham and Allison Wilson How should a regulatory agency announce they have discovered something potentially very important about the safety of products they have been approving for over twenty years? In the course of analysis to identify potential allergens in GMO crops, the European Food Safety Authority (EFSA) has belatedly discovered that the most common genetic regulatory sequence in commercial GMOs also encodes a significant fragment of a viral gene (Podevin and du Jardin 2012). This finding has serious ramifications for crop biotechnology and its regulation, but possibly even greater ones for consumers and farmers. This is because there are clear indications that this viral gene (called Gene VI) might not be safe for human consumption. It also may disturb the normal functioning of crops, including their natural pest resistance. Cauliflower Mosaic Virus It is easy to see the attraction for EFSA of option two. Unsurprisingly, EFSA chose option two. Séralini, G-E., E.

Eugenics and the human genome project Christophe Larroque History 215B: “Artificial Life, From The Golem To Human Cloning” Scientists Discover End Run Around GMO Regulations By Brandon Turbeville It appears that the religion of Scientism is finally experiencing phsase 2 of any religion. That phase in which the adherents begin to lose sight of what even the originator or focus of their religion stood for or opposed and now becomes focused on promoting or perpetuating and defending the dogma surrounding it. The danger and legitimacy of GMOs no longer being in question for those who have latched themselves to the snake oil wagon, some scientists and researchers are no longer interested in determining the safety or usefulness of those organisms but are attempting to develop means of avoiding the regulation of their promotion. Research done by scientists at Seoul National University in South Korea, is a perfect example of this.

Altered Genes & Twisted Truth: Dr. Jane Goodall Helps Expose The Dangers Of GMOs Dr. Jane Goodall, one of the world’s most prominent and popular primatologists, ethologists, and anthropologists, is starting to make a lot of noise about genetically modified foods and organisms (GMOs). She’s no stranger to speaking out against them, and joins a very long and growing list of scientists and activists trying to create awareness about the risks they pose to human health and to the environment. In September of 2014, she called for a complete ban of GMOs on her website, urging the citizenry of the world to boycott them. She’s also been very vocal about the pesticides that are commonly sprayed on our food. A simple Google or YouTube search can suffice if you are looking to hear more about her stance on GMOs and pesticides.

Do GMO Crops Really Have Higher Yields? According to the biotech industry, genetically modified (GM) crops are a boon to humanity because they allow farmers to "generate higher crop yields with fewer inputs," as the trade group Biotechnology Industry Organization (BIO) puts it on its web page. Buoyed by such rhetoric, genetically modified seed giant Monsanto and its peers have managed to flood the corn, soybean, and cotton seed markets with two major traits: herbicide resistance and pesticide expression—giving plants the ability to, respectively, withstand regular lashings of particular herbicides and kill bugs with the toxic trait of Bacillus thuringiensis, or Bt. Turns out, though, that both assertions in BIO's statement are highly questionable. Washington State University researcher Charles Benbrook has demonstrated that the net effect of GMOs in the United States has been an increase in use of toxic chemical inputs. That may be true, but it's a long way from "generating higher crop yields with fewer inputs."

GMO Research Center In a sudden turn of events, three separate incidents of Chinese authorities identifying and destroying illegally imported GM corn from the United States have been reported. An alarming new study finds that glyphosate, the active ingredient in Roundup weedkiller, is estrogenic and drives breast cancer cell proliferation in the parts-per-trillion range. Does this help explain the massive mammary tumors that the only long term animal feeding study on Roundup and GM corn ever performed recently found? According to a new study, the ‘Cry’ toxins that Monsanto’s GMO crops have been genetically modified to produce are a lot more toxic to mammals than previously thought, primarily to the blood. BREAKING: The FBI reported today on its investigation into the destruction of genetically modified sugar beets from two fields in Southern Oregon's Jackson County earlier this month, calling the events an act of "economic sabotage."

Genetic Modification of Food, Biosphere, and Humanity: Disaster Unfolding by Roger Landry (TLB)thelibertybeacon We who are in the know constantly rail against Genetically Modified Organisms (GMO’s). We are awake and aware, through our constant search for knowledge on this subject. We are also painfully aware that the science has no long term credibility. More research and studies are published daily proving the extreme and detrimental health affects these organisms have on humanity with the long term ramifications still unrealized, yet their proliferation continues and accelerates. genetic-weapon-against-insects-raises-hope-and-fear-in-farming Scientists and biotechnology companies are developing what could become the next powerful weapon in the war on pests — one that harnesses a Nobel Prize-winning discovery to kill insects and pathogens by disabling their genes. By zeroing in on a genetic sequence unique to one species, the technique has the potential to kill a pest without harming beneficial insects. That would be a big advance over chemical pesticides. To see the full article, subscribe here. The scientists who first unraveled this mechanism won the 2006 Nobel Prize in Physiology or Medicine, and it was initially assumed that most of the use would be in medicine. Imagine drugs that could turn off essential genes in pathogens or tumors, or one that contributes to high cholesterol.

The 3 Minute Video That Explains Why 100 Years Ago People Were Eating Food Most Of Us Will Never Taste Subscribe and get Galactic News Daily Updates: The topic of GMOs is certainly a recurring theme here at CE, as we now feature over 200 articles relating to the scientific process that is impacting so much of what we consume. Despite the information being relatively widespread and well-known at this point, GMO use continues to rise worldwide and the impact it’s having on our health is becoming more and more prominent. However, this article focuses on another impact genetically modified seeds and crops are having on us, one which effects our overall human experience. The topic of conversation this time around is the destruction of certain crop varieties, as we turn our focus to the mass production of particular GMO crops rather than the stability in production of all crops possible. Related

The DARK Act: Monsanto's Dream Come True, a Waking Nightmare for Clean Food and the Environment 28th July 2015 By Carolanne Wright Contributing Writer for Wake Up World Farmers Abandoning GMO Seeds And The Reason Will Surprise You Aaron Bloom. Image source: Modern Farmer A growing number of farmers are abandoning genetically modified seeds, but it’s not because they are ideologically opposed to the industry. Simply put, they say non-GMO crops are more productive and profitable.

Study Indicates GMO Soy Produces EXCESS Formaldehyde By Catherine J. Frompovich Back in 1992, when the U.S. FDA was in the process of approving GMOs, it came up with its lame “Statement of Policy – Foods Derived from New Plant Varieties” [1], with a section that apparently was designed to lull eaters into believing that any GMO-produced toxicants, or other previously-unknown food factors, occurring by default in GMOs could be considered as part of ‘natural’ GMO plant physiology and, therefore, there’s nothing to be concerned about. Didn’t the FDA state that GMO phood is equivalent to non-GMO food?

HealthFreedoms – Study: Goats Fed GM Soy Have Altered DNA, Milk, and Offspring First, the herbicide chemical glyphosate was found in breast milk of mothers around the country. Now, there is a new study showing that the DNA in goats fed transgenic, GM soy feed is altered, and the milk itself is of lower quality, affecting the offspring. Kid goats were studied both in vivo and post mortem, and what the researchers of this study found was not good. Colostrum is the ‘pre-milk’ in all mammals that provides incredible immuno-defense to offspring. It comes in first before the regular milk supply to ensure that new babies (in this case, baby goats) are ready to take on the dangerous microbes of the world. It was found that kids (baby goats) which fed on GM soy had both DNA fragments that were not supposed to be there, i.e., are not normally found in goat milk, and the immunoglobulin concentration was altered.

There is no stopping the GMO labeling movement, admits mainstream media (NaturalNews) It is a war for the truth, and NationalGeographic.com writer Laura Parker seems to think that the people are winning it. Awareness about the presence of genetically modified organisms (GMOs) is clearly on the rise nationwide, and in the midst of this knowledge boon comes the admission by some in the mainstream media that mandatory GMO labeling is no longer a question of if, but of when. Numerous states have attempted to pass GMO labeling legislation in recent years, but only a few have been successful. Both California and Washington come to mind, as voters narrowly rejected two pieces of legislation, Proposition 37 in California and Initiative 522 in Washington, that would have required full disclosure of GMO ingredients in foods sold at the retail level.