Roundup disrupts male reproductive functions by triggering calcium-mediated cell death in rat testis and Sertoli cells. Prepubertal exposure to commercial formulation of the herbicide glyphosate alters testosterone levels and testicular morphology. 2012. Mesnage et al. Ethoxylated adjuvants of glyphosate based herbicides are active principles of human cell toxicity. Pesticide use ramping up as GMO crop technology backfires: study. Glyphosate Formulations Induce Apoptosis and Necrosis in Human Umbilical, Embryonic, and Placental Cells. This site uses cookies to improve performance. If your browser does not accept cookies, you cannot view this site. Setting Your Browser to Accept Cookies There are many reasons why a cookie could not be set correctly. 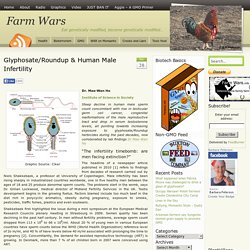 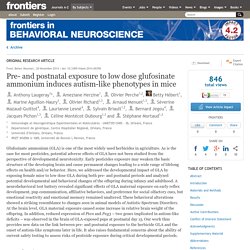 There is a growing interest in the range of alterations, which pre- and postnatal exposure to pesticides may produce on behavioral, emotional, and cognitive skills (Julvez and Grandjean, 2009). Previous studies reported that prenatal urinary measures of pesticides exposures were associated with increased abnormal reflexes in human neonates living in an agricultural community (Young et al., 2005). In line with this, prenatal exposure to some pesticides was associated with both psychomotor and mental developmental delays in young children (Rauh et al., 2006). Figure 1. The glyphosate toxicity studies you're not allowed to see.

Pesticide regulators are refusing to release to the public the key industry studies on glyphosate that underpin regulatory authorizations and safety limits set for the herbicide, writes Claire Robinson. 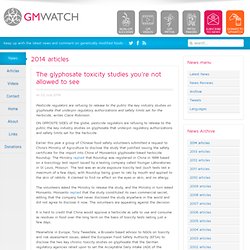 ON OPPOSITE SIDES of the globe, pesticide regulators are refusing to release to the public the key industry studies on glyphosate that underpin regulatory authorizations and safety limits set for the herbicide. Earlier this year a group of Chinese food safety volunteers submitted a request to China’s Ministry of Agriculture to disclose the study that justified issuing the safety certificate for the import into China of Monsanto's glyphosate-based herbicide Roundup. The Ministry replied that Roundup was registered in China in 1988 based on a toxicology test report issued by a testing company called Younger Laboratories in St Louis, Missouri. GMO Insulin Causes Type 1 Diabetes in Type 2 Diabetics, Study Finds. 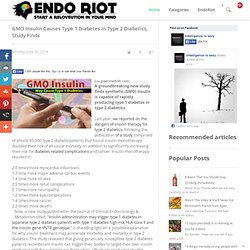 Last year, we reported on the dangers of insulin therapy for type 2 diabetics, following the publication of a study comprised of almost 85,000 type 2 diabetic patients that found insulin monotherapy doubled their risk of all-cause mortality, in addition to significantly increasing their risk for diabetes-related complications and cancer. 3 Reasons I Don't Eat GMO Food: An MD Explains. “Genetically modified organisms,” or GMOs, are plants and animals that have been created by combining DNA of different species in a way that could not occur in nature or by traditional cross-breeding. 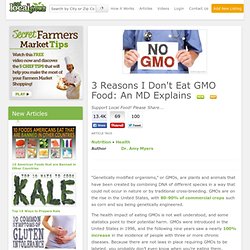 GMOs are on the rise in the United States, with 80-90% of commercial crops such as corn and soy being genetically engineered. The health impact of eating GMOs is not well understood, and some statistics point to their potential harm. GMOs were introduced in the United States in 1996, and the following nine years saw a nearly 100% increase in the incidence of people with three or more chronic diseases. Because there are not laws in place requiring GMOs to be labeled, you probably don’t even know when you’re eating them.

Luckily, there are some ways to avoid these potentially problematic foods. Golden rice myths. Dr Michael Hansen debunks some of the many myths promoted about Golden Rice. 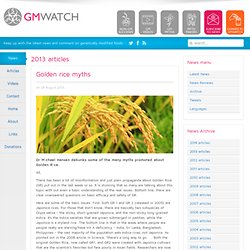 Groundbreaking New Study Links GMO to Leukemia. By: Christina SarichNatural Society There are lots of ‘scientists,’ otherwise known as the academics on Monsanto’s payroll, who keep spouting the preposterous statement that there is no real science to back up the claims that GMO are bad for our health, but yet another study says otherwise. 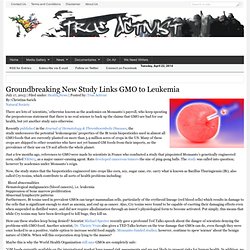 Recently published in the Journal of Hematology & Thromboembolic Diseases, the study underscores the potential ‘leukemogenic’ properties of the Bt toxin biopesticides used in almost all GMO foods that are currently planted on more than 3.9 million acres of crops in the US. Many of these crops are shipped to other countries who have not yet banned GM foods from their imports, so the prevalence of their use on US soil affects the whole planet.

Just a few months ago, references to GMO were made by scientists in France who conducted a study that pinpointed Monsanto’s genetically engineered corn, called NK603, as a major cancer-causing agent. Glyphosate's Toxicology by Caroline Cox. Glyphosate, Part 1: Toxicology. 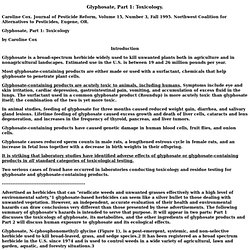 Caroline Cox. Journal of Pesticide Reform, Volume 15, Number 3, Fall 1995. 30 Years of genetically engineered plants - Consequences of commercial growing in the US. Munich/ Berlin 01.02.2013 Today in Berlin a new report was published presenting a critical assessment of the consequences of the commercial cultivation of genetically engineered plants in the US. 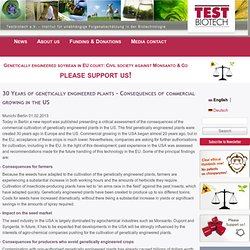 The first genetically engineered plants were created 30 years ago in Europe and the US. Commercial growing in the USA began almost 20 years ago, but in the EU, acceptance of these crops is much lower. Nevertheless, companies are asking for further authorisations for cultivation, including in the EU. GMO Alert: Eating GM Wheat May Destroy Your Liver, Warn Scientists. France Launches Major Investigation Into GMOs Following Tumor Study. Following the release of a peer-reviewed piece of research linking the consumption of Monsanto’s Roundup-containing GMO crops to tumors and organ damage, the French government is now calling for a health agency investigation. 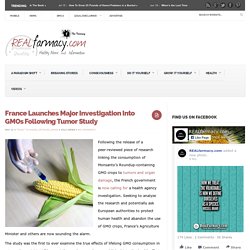 Seeking to analyze the research and potentially ask European authorities to protect human health and abandon the use of GMO crops, France’s Agriculture Minister and others are now sounding the alarm. The study was the first to ever examine the true effects of lifelong GMO consumption in rats, and was dubbed ”the most thorough research ever published into the health effects of GM food crops and the herbicide Roundup on rats.” Finding an onset of mass tumors and damage to the kidneys and liver, the study has serious implications as to what large-scale GMO consumption is doing to humans. “Depending on ANSES’ opinion, the government will urge the European authorities to take all necessary measures to protect human and animal health,” they said. Share: Comments.

Longest-Running GMO Safety Study Finds Tumors in Rats. More than two decades ago, the U.S. Food and Drug Administration (FDA) granted GMOs “generally regarded as safe” status, meaning the industry had no obligation to conduct long-term safety studies. And while GMOs don’t have what scientists call “acute” effects, what about “chronic” effects — those that come on gradually and can’t easily be tied to one cause? The French study — the most comprehensive GMO safety assessment ever conducted — highlights that concern. Former Pro-GMO Scientist Speaks Out On The Real Dangers of GMO’s. I retired 10 years ago after a long career as a research scientist for Agriculture Canada.

When I was on the payroll, I was the designated scientist of my institute to address public groups and reassure them that genetically engineered crops and foods were safe. There is, however, a growing body of scientific research – done mostly in Europe, Russia, and other countries – showing that diets containing engineered corn or soya cause serious health problems in laboratory mice and rats. GMO fail: Monsanto foiled by feds, Supreme Court, and science. It’s been a good week if you enjoy a little GMO schadenfreude.

The FDA has reportedly bowed to public pressure to extend the comment period on its approval of genetically engineered salmon, and Illinois, Maryland, and Iowa are the latest states to buck GMOs by introducing labeling bills into state legislature. DN! AARON MATÉ: President Obama outraged food activists last week when he signed into law a spending bill with a controversial rider attached. Critics have dubbed the rider the "Monsanto Protection Act. "