New Page 2. “Scientists” against “GMOs”. Prop 37 Lawyer Claims He Never Thought Much About His Wording. Here is a head scratcher; when confronted about the vague, conflicting language in Proposition 37 - even the real name, the California Right to Know Genetically Modified Food Act, is weird and disjointed - Attorney James Wheaton, who made his fortune in nuisance lawsuits under the Proposition 65 labeling act he championed, told the Sacramento Bee's Dan Moran he put so little thought into the verbage of Proposition 37 that he he hadn't given any thought to whether he might litigate over the new measure, if it passes. 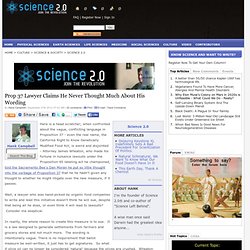 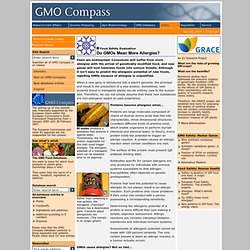 Although it isn’t easy to predict the allergenic potential of new foods, rejecting GMOs because of allergies is unjustified. When a new gene is introduced into a plant’s genome, the principal end result is the production of a new protein. Sometimes, new proteins found in transgenic plants can be entirely new to the human diet. Therefore, we can not simply assume that these new substances are non-allergenic based on past experience. GMOs cause allergies? The more genetically modified plants become present on the market, the more people will be consuming proteins new to the human diet. GM Crops and Allergenicity. Some reports in online and popular magazines have suggested that the allergenicity rate has increased since the introduction of GM crops. 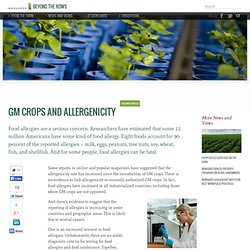 There is no evidence to link allergenicity to currently authorized GM crops. In fact, food allergies have increased in all industrialized countries, including those where GM crops are not approved. Genetic Roulette. "Genetically Engineered" In California: A Food Label We Don't Need. Www.thechicagocouncil.org/UserFiles/File/GlobalAgDevelopment/Report/Agricultural_Innovation_Final.pdf. Code of Federal Regulations. 600+ published safety assessments. Peer Reviewed Publications on the Safety of GM Foods. By Dr. 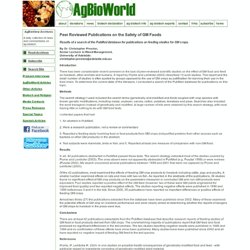 Christopher Preston, Senior Lecturer in Weed Management, University of Adelaide; christopher.preston@adelaide.edu.au Introduction There has been considerable recent comment on the lack of peer-reviewed scientific studies on the effect of GM food and feed on livestock, other animals and humans. A report by Pryme and Lembcke (2003) described 10 such studies. Studies for GENERA. Pusztai's Potatoes - Is 'Genetic Modification' the Culprit? By Dr. 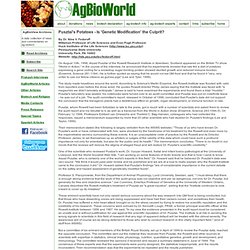 Nina V. Fedoroff Willaman Professor of Life Sciences and Evan Pugh Professor Huck Institutes of the Life Sciences ( Pennsylvania State University University Park, PA 16802 Website: Current Biology - Anthocyanins Double the Shelf Life of Tomatoes by Delaying Overripening and Reducing Susceptibility to Gray Mold. Figure 1 Accumulation of Anthocyanins in Tomato Fruit Delays Late Ripening and Decreases Pathogen Susceptibility (A) Wild-type, red (i and ii) and transgenic, purple (iii and iv) tomato fruits were tagged during the initial stages of development and harvested and photographed at the end of the green stage (i and iii). 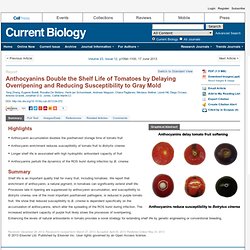 By Andrew Walden Medical marijuana advocates would do well to question anti-genetic protests. 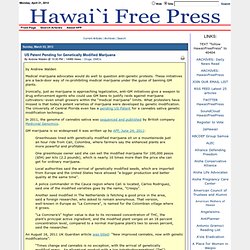 These initiatives are a back-door way of re-prohibiting medical marijuana under the guise of banning GM plants. Ironically, just as marijuana is approaching legalization, anti-GM initiatives give a weapon to drug enforcement agents who could use GM bans to justify raids against marijuana cultivators--even small growers within the “medical marijuana” limits. Studies with independent funding. FDA Orders Dr. Joseph Mercola to Stop Illegal Claims. Stephen Barrett, M.D. 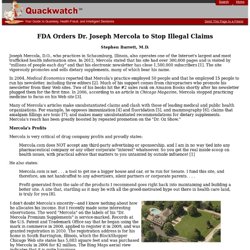 Joseph Mercola, D.O., who practices in Schaumburg, Illinois, also operates one of the Internet's largest and most trafficked health information sites. In 2012, Mercola stated that his site had over 300,000 pages and is visited by "millions of people each day" and that his electronic newsletter has close 1,500,000 subscribers [1]. The site vigorously promotes and sells dietary supplements, many of which bear his name. In 2004, Medical Economics reported that Mercola's practice employed 50 people and that he employed 15 people to run his newsletter, including three editors [2]. Joseph Mercola. Joseph Mercola , "doctor" of osteopathy , is a popular guru of alternative medicine and a member of the right-wing quack outfit Association of American Physicians and Surgeons . 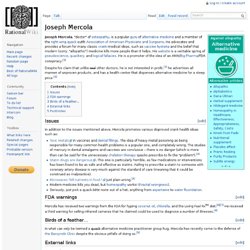 He advocates and provides a forum for many classic crank medical ideas, such as vaccine hysteria and the belief that modern (sorry, "allopathic") medicine kills more people than it helps. His website is a veritable spring of pseudoscience , quackery , and logical fallacies . He is a promoter of the idea of an AMA/ Big Pharma /FDA conspiracy. [1] Despite his claim that unlike real other doctors, he is not interested in profit, [2] he advertises all manner of unproven products, and has a health center that dispenses alternative medicine for a steep price. [3] [ edit ] Issues In addition to the issues mentioned above, Mercola promotes various disproved crank health ideas such as: Joseph Mercola. Joseph M. 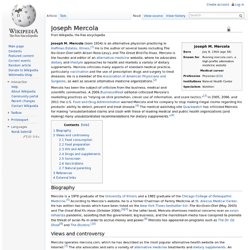 Mercola (born 1954) is an alternative physician practicing in Hoffman Estates, Illinois . [ 1 ] He is the author of several books including The No-Grain Diet (with Alison Rose Levy), and The Great Bird Flu Hoax . Mercola is the founder and editor of an alternative-medicine website, where he advocates dietary and lifestyle approaches to health and markets a variety of dietary supplements. Joe Mercola: Proof positive that quackery sells. For as many benefits as the Internet and the web have brought us in the last two decades, there are also significant downsides.

I could go into all the societal changes brought about by the proliferation of this new technology, not the least of which (to me, at least) is the newfound ability of someone like me to find an audience. After all, pre-Internet and pre-blog, I could try to write books, or I could try to get onto TV and radio, but those are very difficult things to do.

Over the last seven years, steadily blogging, I’ve built up an audience. Joseph Mercola D.O. Lobbying Spending Database - Monsanto Co, 2013. Influence Explorer. Why Does Monsanto Sue Farmers Who Save Seeds? Monsanto patents many of the seed varieties we develop. Patents are necessary to ensure that we are paid for our products and for all the investments we put into developing these products. This is one of the basic reasons for patents. A more important reason is to help foster innovation. Without the protection of patents there would be little incentive for privately-owned companies to pursue and re-invest in innovation. Monsanto invests more than $2.6 million per day in research and development that ultimately benefits farmers and consumers. When farmers purchase a patented seed variety, they sign an agreement that they will not save and replant seeds produced from the seed they buy from us.

Problems with organic Six Reasons Organic is NOT The Most Environmentally Friendly Way To Farm. Contrary to widespread consumer belief, organic farming is not the best way to farm from an environmental point if view. The guiding principal of organic is to rely exclusively on natural inputs. That was decided early in the 20th century, decades before before the scientific disciplines of toxicology, environmental studies and climate science emerged to inform our understanding of how farming practices impact the environment. As both farming and science have progressed, there are now several cutting edge agricultural practices which are good for the environment, but difficult or impossible for organic farmers to implement within the constraints of their pre-scientific rules. There was one window during which the rules for organic might have been adjusted to reflect a more modern understanding.

In 1990 the US Congress charged the USDA with the task of setting a national standard for what products could be legally sold as Organic. 1. The Organic Consumer Association: Progressive Activists or Organic AstroTurf? Going shopping with questionable grass roots There are few organizations in the food movement that have as much respect as the Organic Consumer Association (OCA). The group is linked to on the Commondreams.org website under the heading “America’s Progressive Community.” It shares this place with well-known organizations like the ACLU, Planned Parenthood, and Amnesty International. Its literature is often referred to on the ongoing debates on biotechnology and organic agriculture. And, Ronnie Cummins—the organization’s founder and executive director—is a frequent lecturer on GMOs, author of the book Genetic Engineered Food: A Self-Defense Guide for Consumers, and has been a contributor to the Huffington Post, Commondreams.org, and Alternet.org.

Organic Consumers Association. Approved Chemicals for Use in Organic Postharvest Systems. Adapted from: Silva, E. 2008. Approved chemicals for use in organic postharvest systems. In Wholesale success: a farmer's guide to selling, postharvest handling, and packing produce (Midwest edition). Available online at: (verified 6 Dec 2011). Introduction: Postharvest Handling and the National Organic Program The USDA has established a National Organic Program (NOP) Rule to set and enforce uniform standards for both producing and handling agricultural and processed food products labeled as organic. Little evidence of health benefits from organic foods, Stanford study finds. The Terrible Tragedy of the Healthy Eater. Do GMO crops have a higher yield? It depends on the answer. Comparing the yields of organic and conventional agriculture : Nature.

Grapefruit. Allergic to Science–Proteins and Allergens in Our Genetically Engineered Food. There Is No Link Between ADHD And Organophosphate Pesticides. Pediatrics has a now famous study in which it was found that kids exposed to certain pesticides had significantly increased risk for ADHD. Gresham company recalls pomegranate kernels over Hep A. 2011 Germany E. coli O104:H4 outbreak. The 2011 E. coli O104:H4 outbreak. Exposure to the outbreak start from 21 April 2011 with permanent or temporary stay in Germany, consumption of a food acquired in Germany or close contact with a HUS case. [ 1 ]