Problem loading page. HealthFreedoms – Study: Goats Fed GM Soy Have Altered DNA, Milk, and Offspring. Regulators Discover a Hidden Viral Gene in Commercial GMO Crops. By Jonathan Latham and Allison Wilson How should a regulatory agency announce they have discovered something potentially very important about the safety of products they have been approving for over twenty years? 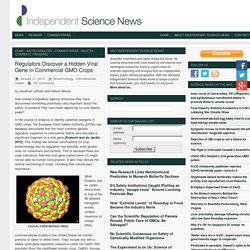 In the course of analysis to identify potential allergens in GMO crops, the European Food Safety Authority (EFSA) has belatedly discovered that the most common genetic regulatory sequence in commercial GMOs also encodes a significant fragment of a viral gene (Podevin and du Jardin 2012). This finding has serious ramifications for crop biotechnology and its regulation, but possibly even greater ones for consumers and farmers. This is because there are clear indications that this viral gene (called Gene VI) might not be safe for human consumption. It also may disturb the normal functioning of crops, including their natural pest resistance. Cauliflower Mosaic Virus. Altered Genes & Twisted Truth: Dr. Jane Goodall Helps Expose The Dangers Of GMOs. 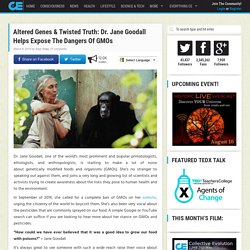 Jane Goodall, one of the world’s most prominent and popular primatologists, ethologists, and anthropologists, is starting to make a lot of noise about genetically modified foods and organisms (GMOs). Republished study: long-term toxicity of a Roundup herbicide and a Roundup-tolerant genetically modified maize. Dr. Don Huber Talks about Genetically-Engineered Foods.

How Monsanto Gained Huge Control of the World's Food Supply. Genetic Modification of Food, Biosphere, and Humanity: Disaster Unfolding. The DARK Act: Monsanto's Dream Come True, a Waking Nightmare for Clean Food and the Environment. 28th July 2015 By Carolanne Wright Contributing Writer for Wake Up World In a startling victory for Monsanto, the United States House of Representatives, against enormous public and industry outcry, passed H.R. 1599 — widely known as the “Deny Americans the Right to Know Act” or “The Dark Act.” 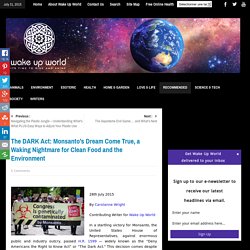 This decision comes despite the opposition of over 300 farmer, environmental and consumer groups who opposed the bill in a letter to Congress, not to mention disapproval from the National Farmers Union, America’s second largest farming organization. US Aid To El Salvador Came With Strings Attached: Monsanto Seeds Required. El Salvador previously took steps toward banning glyphosate, the potential carcinogen found in Monsanto’s Roundup herbicide. 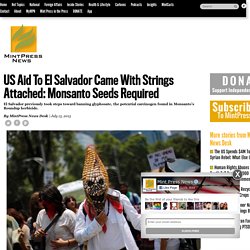 A protestor demonstrates against Monsanto in the annual world March Against Monsanto. SAN SALVADOR, El Salvador — Farmers and activists for natural agriculture in El Salvador successfully resisted efforts by the U.S. government to tie foreign aid to the use of GMO seeds, in the latest attempt to link relief money with profits for Monsanto, the controversial multinational agribusiness giant. In 2013, the U.S. offered El Salvador $277 million in aid through the Millennium Challenge Corporation, a foreign aid agency established under President George W. Bush. Then, in 2014, Dahr Jamail reports for Truthout, U.S. officials started putting increased pressure on the Central American country to make “economic and environmental policy changes” in return for receiving the next phase of the aid package. Share this article! Print This Story. Former genetic engineer now speaks out against GMO risks. By Ken Roseboro Published: May 31, 2013 Category: GMO Health Risks. 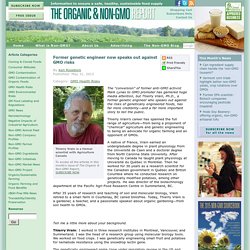 What BBC’s Panorama got wrong on GMOs. How the People Can Outwit the Global Domination Plans of Agribusiness. The strategic centerpiece of Monsanto PR is to focus on the promotion of one single compelling idea. 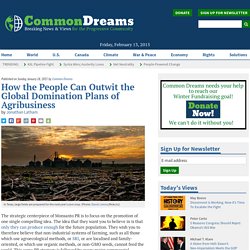 The idea that they want you to believe in is that only they can produce enough for the future population. They wish you to therefore believe that non-industrial systems of farming, such as all those which use agroecological methods, or SRI, or are localised and family-oriented, or which use organic methods, or non-GMO seeds, cannot feed the world. There is no scientific consensus on GMO safety. Is Genetically Engineered Food A Fraud? An estimated 85 percent of all food consumed in the United States now contains genetically modified organisms (GMOs)—from the cereal you feed your children to the milk you put in your coffee to the sweet corn you chomp on in summer. 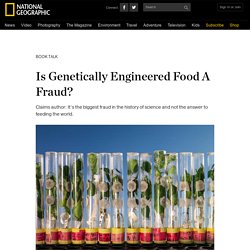 But because there’s no labeling requirement, we don’t know which foods have GMOs and which don’t. We also have no hard facts about the possible health effects. Children in GM soy-growing area of Argentina have genetic damage. Damage to DNA is 44% higher than in unexposed children. 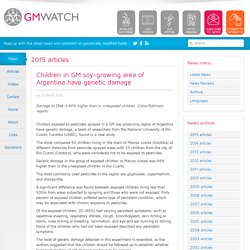 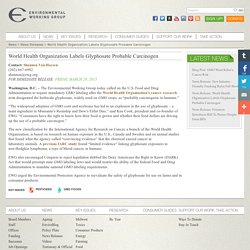 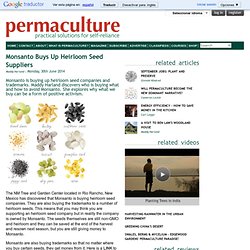 They are also buying the trademarks to a number of heirloom seeds. HELP HAWAII END GMO & OPENAIR CHEMICAL EXPERIMENTS. The citizens of Maui are standing up for the World. Confirmed: DNA From Genetically Modified Crops Can Be Transferred Into Humans Who Eat Them.