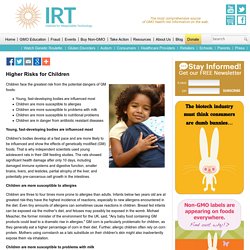 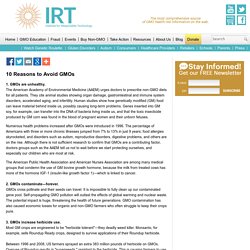 GMOs are unhealthy. The American Academy of Environmental Medicine (AAEM) urges doctors to prescribe non-GMO diets for all patients. They cite animal studies showing organ damage, gastrointestinal and immune system disorders, accelerated aging, and infertility. Human studies show how genetically modified (GM) food can leave material behind inside us, possibly causing long-term problems. Genes inserted into GM soy, for example, can transfer into the DNA of bacteria living inside us, and that the toxic insecticide produced by GM corn was found in the blood of pregnant women and their unborn fetuses.

Numerous health problems increased after GMOs were introduced in 1996. The American Public Health Association and American Nurses Association are among many medical groups that condemn the use of GM bovine growth hormone, because the milk from treated cows has more of the hormone IGF-1 (insulin-like growth factor 1)―which is linked to cancer. 2. 3. 4. 5. 7. 9. 10. Non-GMO Project. GMO's IN TNE NEWS. The Cornucopia Institute March 30th, 2011 Lawsuit Filed To Protect Themselves from Unfair Patent Enforcement on Genetically Modified Seed Action Would Prohibit Biotechnology Giant from Suing Organic Farmers and Seed Growers If Innocently Contaminated by Roundup Ready Genes NEW York: On behalf of 60 family farmers, seed businesses and organic agricultural organizations, the Public Patent Foundation (PUBPAT) filed suit today against Monsanto Company challenging the chemical giant’s patents on genetically modified seed. 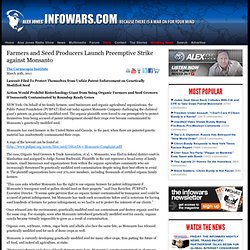 The organic plaintiffs were forced to sue preemptively to protect themselves from being accused of patent infringement should their crops ever become contaminated by Monsanto’s genetically modified seed. Monsanto has sued farmers in the United States and Canada, in the past, when there are patented genetic material has inadvertently contaminated their crops. A copy of the lawsuit can be found at: ( The case, Organic Seed Growers & Trade Association, et al. v. Dr. David L. Where GMOs Hide in Your Food. Genetic Engineering Companies. This is a short list of some of the commonly known private companies that are developing genetically engineered crops. 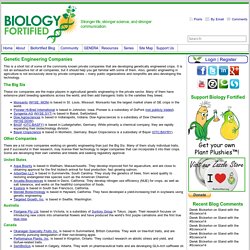 It is not an exhaustive list of all companies, but it should help you get familiar with some of them. Also, genetic engineering in agriculture is not exclusively done by private companies – many public organizations and nonprofits are also developing the technology. The Big Six These six companies are the major players in agricultural genetic engineering in the private sector. Many of them have extensive plant breeding operations across the world, and then add transgenic traits to the varieties they breed.

Top 15 chemical additives in your food. We don't just want our food to taste good these days: It also has to look good. 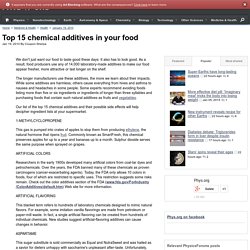 As a result, food producers use any of 14,000 laboratory-made additives to make our food appear fresher, more attractive or last longer on the shelf. The longer manufacturers use these additives, the more we learn about their impacts. While some additives are harmless, others cause everything from hives and asthma to nausea and headaches in some people. Some experts recommend avoiding foods listing more than five or six ingredients or ingredients of longer than three syllables and purchasing foods that contain such natural additives as fruits and vegetables.

Our list of the top 15 chemical additives and their possible side effects will help decipher ingredient lists at your supermarket. This gas is pumped into crates of apples to stop them from producing ethylene, the natural hormone that ripens fruit. Boycott These Pro-GMO Brands - Infographic. Many of the leading anti-GMO labeling supporters are members of the Grocery Manufacturers Association (GMA) – the majority of which are the creators of the foods you and your family may be eating right now. 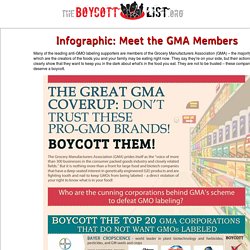 The Good, Bad and Ugly about GMOs - Natural Revolution. There is a mountain of information about GMOs, (genetically modified organisms) spot checking several research articles a PubMed search that appears to confirm the seriousness of this issue. 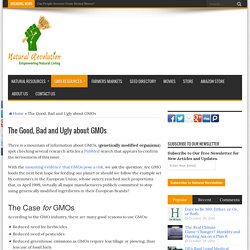 With the mounting evidence that GMOs pose a risk, we ask the question: Are GMO foods the next best hope for feeding our planet or should we follow the example set by consumers in the European Union, whose outcry reached such proportions that, in April 1999, virtually all major manufacturers publicly committed to stop using genetically modified ingredients in their European brands? The Case for GMOs According to the GMO industry, there are many good reasons to use GMOs: GMO FOODS. The Good, Bad and Ugly about GMOs - Natural Revolution.

What Are We Eating? - LabelGMOs. Fact: GMO's have not been proven safe, and the long-term health risks on humans of genetically modified foods have not been adequately investigated. 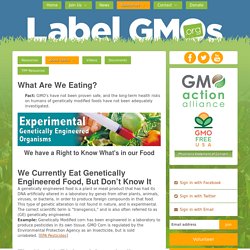 We have a Right to Know What's in our Food We Currently Eat Genetically Engineered Food, But Don’t Know It A genetically engineered food is a plant or meat product that has had its DNA artificially altered in a laboratory by genes from other plants, animals, viruses, or bacteria, in order to produce foreign compounds in that food. This type of genetic alteration is not found in nature, and is experimental.