GMO's, Good for Whom?

GMOs and Making Up Your Own Science. Dedicated anti-science groups engage in a number of methods to maintain their propaganda upstream against the scientific evidence. 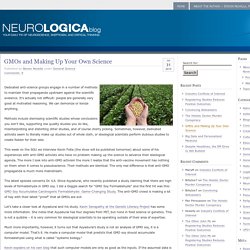 It’s actually not difficult- people are generally very good at motivated reasoning. We can demonize or lionize anything. Methods include dismissing scientific studies whose conclusions you don’t like, supporting low quality studies you do like, misinterpreting and distorting other studies, and of course cherry picking. Sometimes, however, dedicated activists seem to literally make up studies out of whole cloth, or ideological scientists perform dubious studies to create fodder for their side.

Diabetes and Biotechnology: A Shared History...A Great Future. GMOs. On the Pharm. The Center for Change and Self Awareness - Agriculture. The current state of Soil and Crop Management While we still have massive Industrial Farming we also have a new breed of farmer that has converted to Organic Farming practices. 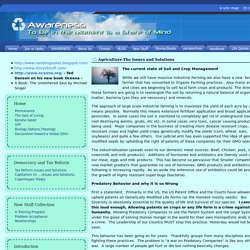 Also many areas and cities are beginning to sell local farm crops and products. The direction these farmers are going is to reenergize the soil by returning a natural balance of organic matter, bacteria (yes they are necessary) and minerals. The approach of large scale industrial farming is to maximize the yield of each acre by any means possible. Normally this means extensive fertilizer application and broad application of pesticides. The industrialization spreads even to our domestic meat sources: Beef, Chicken, pork, dairy cows(milk and milk products). 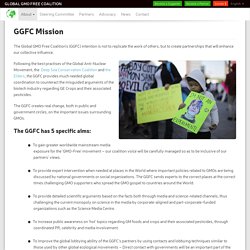 Following the best practises of the Global Anti-Nuclear Movement, the Deep Sea Conservation Coalition and the Elders, the GGFC provides much needed global coordination to counteract the misguided arguments of the biotech industry regarding GE Crops and their associated pesticides. The GGFC creates real change, both in public and government circles, on the important issues surrounding GMOs. GMOs - Natural Society. The 2 Surefire Ways to Know if You're Buying the New GMO Apple.

The Food and Drug Administration has recently approved some genetically modified varieties of apples and potatoes that do not bruise or brown. 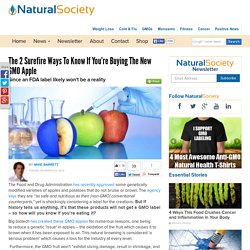 The agency says they are “as safe and nutritious as their [non-GMO] conventional counterparts,” yet is shockingly considering a label for the creations. But if history tells us anything, it’s that these products will not get a GMO label – so how will you know if you’re eating it? Big biotech has created these GMO apples for numerous reasons, one being to reduce a genetic ‘issue’ in apples – the oxidation of the fruit which causes it to brown when it has been exposed to air.

This natural browning is considered ‘a serious problem’ which causes a loss for the industry at every level. Furthermore, the GMO fruit won’t “exhibit slicing damage, result in shrinkage, and put more money in grower’s pockets.” according to Okanagan Specialty Fruits (OSF), but that’s only if the public takes the bait. 1. 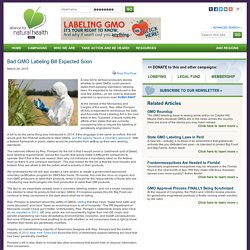 It’s expected to be introduced in the next few weeks—so we need to dissuade potential co-sponsors now! Action Alert! At the behest of the Monsantos and Cargills of the world, Rep. Mike Pompeo (R-KS) is expected to reintroduce his Safe and Accurate Food Labeling Act in the next week or two. If passed, it would nullify the efforts of ten states that are currently considering bills to require the labeling of genetically engineered foods. A bill to do the same thing was introduced in 2014.

New Health Concerns. Non-GMO Project. Dietitians say anti-wheat, pro-nutrition info sentiments will top 2014 trends. Consumers are demanding more nutritional information than ever, and yet obesity rates continue to climb, with some dietitians worrying that Americans are becoming complacent in their unhealthy weights. 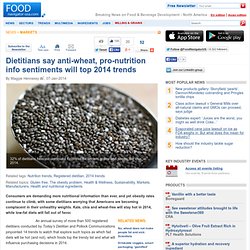 Food Safety. New Law Blocks Anti-GMO Scientists from Advising EPA. A new law will place restrictions on scientists with clear knowledge on GMO dangers, and create room for experts with overt financial ties to the biotech and pharmaceutical industries affected by EPA regulations. 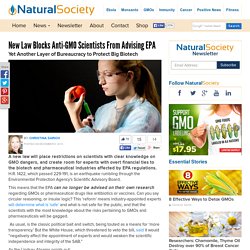 H.R. 1422, which passed 229-191, is an earthquake rumbling through the Environmental Protection Agency’s Scientific Advisory Board. GMO Safety - gmo-safety.eu. GMWatch. NOTE: GM lobbyists are claiming it doesn't matter if the Bt toxin is turning up in people's blood because the Bt toxin is natural, known to be harmless to humans, and has been safely used for decades in agriculture in the form of natural insecticidal sprays, including in organic farming. 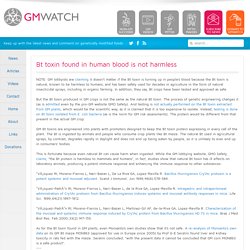 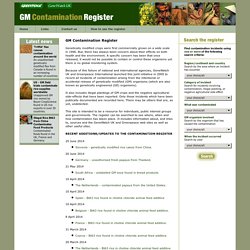 But, there has always been concern about their effects on both health and the environment. A specific concern has been that once released, it would not be possible to contain or control these organisms yet there is no global monitoring system. Because of this failure of national and international agencies, GeneWatch UK and Greenpeace International launched this joint initiative in 2005 to record all incidents of contamination arising from the intentional or accidental release of genetically modified (GM) organisms (which are also known as genetically engineered (GE) organisms). Olly olly oxen free. Global GMO Free Coalition Set to Help Fund World’s Largest GMO. The Global GMO Free Coalition welcomes the launch of the largest ever study on GMO and pesticide safety – Factor GMO. 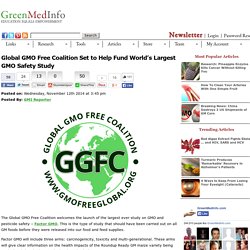 This is the type of study that should have been carried out on all GM foods before they were released into our food and feed supplies. Factor GMO will include three arms: carcinogenicity, toxicity and multi-generational. These arms will give clear information on the health impacts of the Roundup Ready GM maize variety being studied and the glyphosate herbicide with which it is grown.

Glyphosate-based herbicides are the most widely used pesticides in the world. Monsanto's Roundup herbicide is just one of these glyphosate-based herbicides and it accounts for 20% of Monsanto's net profits every year. The Global GMO Free Coalition (GGFC) urges governments and regulatory authorities worldwide to use the precautionary principle regarding GM crops and glyphosate / Roundup until the results of this comprehensive study are released over the next 3 years.

GMO Food Finder/Tracker. This page is dedicated to tracking the spread of Genetically Modified Organisms around the world. Monsanto to Acquire Central America’s Largest Seed Company Expects Deal to Expand Hybrid Corn business June 19, 2008 Fort Mills Times, SC ST. Top Five Ways to Avoid GMOs in Your Food. (NaturalNews) Recent polls across the world have consistently shown that, if they had a choice, 90% of people would actively seek to avoid GMOs (genetically modified organisms) in their food. The large multinational corporations of the world have gone through extensive measures to ensure the citizens of most nations have no possible way of knowing whether the food they and their children are eating contain contaminants of GMOs. The labelling of GMOs on the packaging of any foods in the US for example, is illegal. For example, if a company like Kellogs decided to include a full disclosure label on their cereal box that stated, "contains genetically modified corn" they could be sued by the manufacturer and then face possible prison time.

This is a very important issue because the democratic process of many nations has been surreptitiously supplanted by the corporatocracy of the seed company juggernauts. 1.) THE GROCERY STORE BLACKLIST: 12 FOOD COMPANIES TO AVOID (AND 95 SNEAKY ALIASES) A genetically modified rose by any other name may smell sweet, but it could still have frankenthorns that might independently detach themselves and lop off your finger while you’re smelling it. That’s not unlike a trip to the grocery store these days. How to Persuade Anti-GMO Activists These Crops Can Share Their Values. As a former anti-GMO activist, I have bitter experience of the unpleasantly polarized debate about the merits of GMOs. But that experience makes me see how we might respond to people’s fears without banning a vitally important technology.

10 Reasons Why we Don’t Need GM Foods. Genetically modified (GM) foods are often promoted as a way to feed the world. Golden apple or forbidden fruit? Following the money on GMOs. GMO Foods Petition Introduction National Health Federation - Your voice for health freedom. In 2013, Our Fight Against GMO Food Continues. On November 6, in the wake of one of the most expensive and scurrilous smear campaigns in history, six million voters scared the hell out of Monsanto and Big Food Inc. by coming within a razor’s edge of passing the first statewide mandatory labeling law for genetically modified organisms (GMOs). The battle for GMO labeling and numerous challenges against the industrial food system will continue in 2013. YouTube censors 'Organic Spies' video exposing Whole Foods employees lying about GMOs. Occupy Monsanto As Monsanto has occupied our farms and foods, it's time we take them back. Whole Foods Hidden Camera GMO Sting - Organic Spies - CENSORED by YouTube.