The Man Who's Trying To Build A Better Apple. More than half of EU officially bans genetically modified crops. (Image: Scott Barbour/Getty) It’s a landslide. 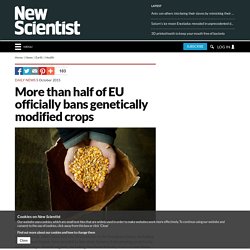 More than half the 28 countries in the European Union, including Germany and France, have decided to ban their farmers from growing genetically modified crops. Several regions, including Northern Ireland, Scotland and Wales have also joined the movement. Environmental groups long opposed to GM crops are delighted with the outcome. “There has never been a clearer signal that GM crops, and the companies that make them are not wanted in Europe,” says Mute Schimpf, of Friends of the Earth Europe. Some 19 member states had applied ahead of the deadline of 3 October to take advantage of rules introduced in April permitting individual member states and regions to ban cultivation of GM crops that have been judged by Europe’s regulators as posing no risk to human health or the environment.

Countries seizing the opportunity to opt out include Germany, France, Italy, Austria, Greece, Hungary, Latvia, Lithuania and Poland. De facto ban Free movement. The Dirty Truth About ‘Organic’ Produce. The Dirty Truth About ‘Organic’ Produce. Six Reasons Organic is NOT The Most Environmentally Friendly Way To Farm. Contrary to widespread consumer belief, organic farming is not the best way to farm from an environmental point if view. 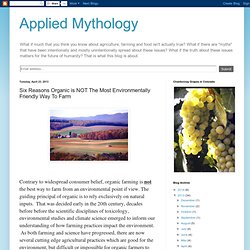 The guiding principal of organic is to rely exclusively on natural inputs. That was decided early in the 20th century, decades before before the scientific disciplines of toxicology, environmental studies and climate science emerged to inform our understanding of how farming practices impact the environment. As both farming and science have progressed, there are now several cutting edge agricultural practices which are good for the environment, but difficult or impossible for organic farmers to implement within the constraints of their pre-scientific rules. There was one window during which the rules for organic might have been adjusted to reflect a more modern understanding. In 1990 the US Congress charged the USDA with the task of setting a national standard for what products could be legally sold as Organic. Kenya: GM Maize Will Double Yields, Says Researcher.

By Otiato Guguyu Genetically modified maize will double productivity while reducing costs of fertiliser by eliminating the infestation of the stem borer. 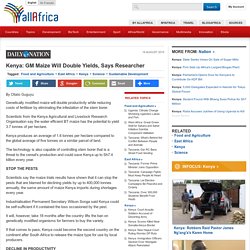 Scientists from the Kenya Agricultural and Livestock Research Organisation say the water efficient BT maize has the potential to yield 3.7 tonnes of per hectare. Kenya produces an average of 1.6 tonnes per hectare compared to the global average of five tonnes on a similar parcel of land. The technology is also capable of controlling stem borer that is a threat to the cereal's production and could save Kenya up to Sh7.4 billion every year. Scientists say the maize trials results have shown that it can stop the pests that are blamed for declining yields by up to 400,000 tonnes annually, the same amount of maize Kenya imports during shortages every year. Industrialisation Permanent Secretary Wilson Songa said Kenya could be self-sufficient if it contained the loss occasioned by the pest.

The Green Scare Problem. Development-of-an-Agricultural-Biotechnology-Crop-Product.pdf. Blame Organic Industry For E. coli Outbreak. Editor’s Note: Mischa Popoff is an IOIA Advanced Organic Inspector and is the author of Is it Organic? 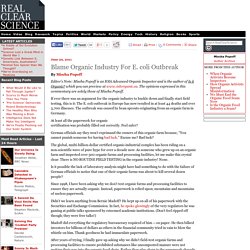 Which you can preview at www.isitorganic.ca. The opinions expressed in this commentary are solely those of Mischa Popoff. If ever there was an argument for the organic industry to buckle down and finally start field testing, this is it: The E. coli outbreak in Europe has now resulted in at least 44 deaths and over 3,700 illnesses. The outbreak was caused by bean sprouts originating from an organic farm in Germany. At least all the paperwork for organic certification was probably filled out correctly. German officials say they won’t reprimand the owners of this organic farm because, “You cannot punish someone for having bad luck. " The global, multi-billion-dollar certified organic-industrial complex has been riding on a non-scientific wave of pure hype for over a decade now.

Didn’t we learn anything from Bernie Madoff? I was once proud to say I grew up in the organic food industry.