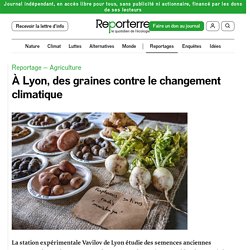 Des grosses, des petites, des tordues, des trapues. Eating in the Age of Climate Crisis. If you tuned in to gawk at the creative costuming of this season’s Met Gala, you may have done so knowing every celebrity crossing the beige carpet was going on to dine on a meat-free meal. 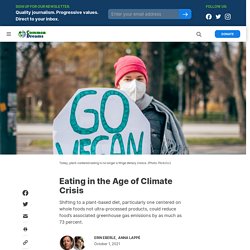 Download Buzzfeed’s Tasty recipe app and the first prompt will ask: “Quick question: Are you a vegetarian?” Pull up a chair at New York City’s three-Michelin-star restaurant Eleven Madison Park and your options will now extend across the vegetable kingdom—but not beyond. These are just some of the signals of a cultural shift away from meat and toward plant-centered cuisines, by default. But addressing the environmental and health impacts of the livestock industry will take more than just changing the menus of high-end restaurants and some app nudging. Thankfully, we’re seeing strategies that work to make this change at scale emerging around the world. Five decades on, the health benefits of plant-centered diets are increasingly well understood. 27 sept. 2021 There's a major gap in the new methane pledge: Agriculture.

Last week, the United States and European Union launched the most ambitious plan to date to slash global methane emissions. 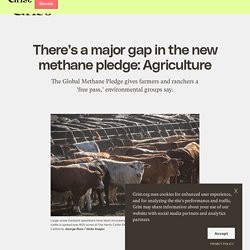 The Global Methane Pledge, which reportedly already has the support of at least six of the world’s 15 largest producers of the greenhouse gas, aims to slash methane emissions 30 percent by 2030. But despite it being lauded as a major success, some environmental justice groups are pointing out that the pledge is vague on one key issue: How it will enforce cutting emissions from the largest source of methane globally — agriculture. 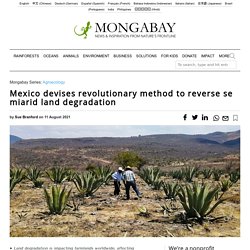 Reversing that process and restoring these croplands and pastures to full productivity is a huge challenge facing humanity — especially as climate change-induced drought takes greater hold on arid and semiarid lands.In Mexico, a university-educated, small-scale peasant farmer came up with an untried innovative solution that not only restores degraded land to productivity, but also greatly enhances soil carbon storage, provides a valuable new crop, and even offers a hopeful diet for diabetics.The process utilizes two plants commonly found on semiarid lands that grow well under drought conditions: agave and mesquite. The two are intercropped and then the agave is fermented and mixed with the mesquite to produce an excellent, inexpensive, and very marketable fodder for grazing animals.The new technique is achieving success in Mexico and could be applied to global degraded lands.

2 août 2021 Pachamama Feeds Us – Navdanya international. The Poison Cartel is Poisoning the World, Driving Species to Extinction, and Contributing to Hunger This post is also available in: Spanish By Dr Vandana Shiva, 1st August 2021 – Pachamama Day The web of life is a food web woven by Pachamama through her self-organization, creativity, generative power and regeneration. 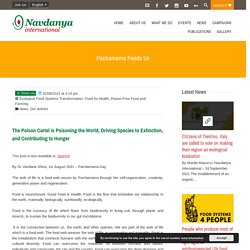 16 juin 2021 Salad will survive climate change. But at what cost? Braddock, Pennsylvania is not what most people would call a farm town. 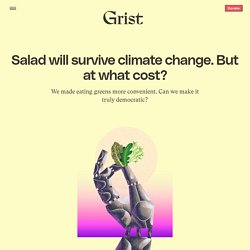 White plumes of methanol, ammonia, zinc, and manganese billow throughout the day from its last remaining steel mill, while cars and pickups and freight trucks roar back and forth across the nearby Rankin Bridge. Despite its diminutive size, the town is well-known in the Pittsburgh region for its air quality, which ranks among the worst in the nation for year-round dust, soot, and smoke pollution.

And yet, inside a wide, windowless warehouse set just a block or two back from the banks of the Monongahela River, thousands of tender, young plants are thriving beneath a gleaming roof and complex HVAC system that shields them from both the azure sky and the effluence of the adjacent smokestacks. The company Fifth Season is responsible for tending to this farm, though the startup’s use of “farm” certainly stretches traditional definitions. 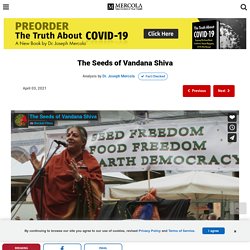 Her life's work has culminated in the creation of seed banks that may one day save future generations' food sovereignty, but how she got there is a fascinating story, chronicled in the documentary "The Seeds of Vandana Shiva. " Shiva, "a brilliant scientist" who became "Monsanto's worst nightmare and a rock star of the international organic food movement,"1 grew up in a Himalayan forest, where her father, a forest conservator, carried out inspections. She would travel up to 45 miles a day with her father as a young girl, and as they traversed the forest he taught her everything about the trees, plants and herbs therein.

"We had a classroom out in the forest," Shiva said, but her formal studies were done in a convent which, at that time, didn't regard science as a subject fit for girls. Factory farming is causing runaway greenhouse gases. It could doom us all. Undefined Afghanistan. 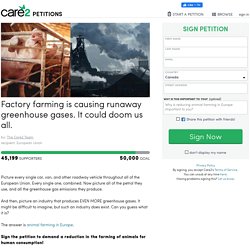 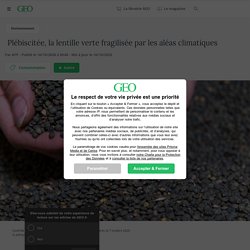 From the lab to the field, agriculture seeks to adapt to a warming world By Jim Robbins on Jul 19, 2020. This story was originally published by Yale Environment 360 and is reproduced here as part of the Climate Desk collaboration. 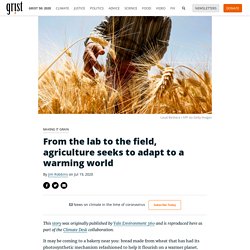 It may be coming to a bakery near you: bread made from wheat that has had its photosynthetic mechanism refashioned to help it flourish on a warmer planet. Despite the fact a number of researchers — some funded by the Bill and Melinda Gates Foundation — are scrambling to create this new breed of wheat, it won’t be arriving any time soon. Increasing temperatures are already taking a toll on the world’s wheat fields. But a new heat-resistant wheat that will replace the types currently grown is a decade or more off in the future. The problem is being seen throughout the world. “It caused 30 percent reduction in national production, which is really huge,” said Senthold Asseng, a researcher at the University of Florida. Don’t have a cow, but Big Dairy’s climate footprint is as big as the UK’s. If dairy cows were a country, they would have the same climate impact as the entire United Kingdom.

Agriculture is a major contributor to Canada’s greenhouse gas emissions. At the same time, farmers are hit by some of the worst effects of climate change. But a coalition of farming groups says they can also be a part of the solution. Climate change is making it harder to be a young farmer. This story was originally published by the Food and Environment Reporting Network and is reproduced here as part of the Climate Desk collaboration. With this season’s severe flooding, raging wildfires, and delayed planting, many of the country’s farmers are struggling to adjust as climate change sets in. Yet young and beginning farmers face unique challenges, farmers and advocates say, with tenuous finances, relatively small operations, and little government support to help them deal with the new, erratic normal.

There are about 340,000 farms in the United States — 17 percent of the total — whose operators have been farming for less than 10 years, according to the Department of Agriculture’s Agricultural Resource Management Survey. Waiter, there’s a climate surcharge in my soup. This story was originally published by Mother Jones and is reproduced here as part of the Climate Desk collaboration. American restaurant diners don’t usually blink before adding an extra 15-20 percent tip onto their bills. In recent years, San Francisco’s eaters have even (mostly) grown accustomed to paying up to 6 percent extra for dinner to offset the cost of the city’s mandated healthcare program. Starting in January, at a smattering of eateries, California customers will see a new fee tacked on to their bill, though this one’s optional: One percent more to make their meal climate friendly.

The surcharge will fund a new program called Restore California, which is managed by the nonprofit Zero Foodprint. The initiative will funnel the money it raises into grants for farmers engaged in carbon farming — growing food with a focus on replenishing the soil’s health in order to increase the amount of carbon dioxide it can sequester. The Perennial shuttered in early 2019. Manger bio : le vrai impact sur l’environnement. L'agriculture à l'épreuve du changement climatique en Ouganda. Synthese cahier reco politiques alim climat sante 2019 4p. New study pinpoints the places most at risk on a warming planet. As many as five billion people will face hunger and a lack of clean water by 2050 as the warming climate disrupts pollination, freshwater, and coastal habitats, according to new research published last week in Science.

People living in South Asia and Africa will bear the worst of it. Climate activists have been telling us for a while now that global warming isn’t just about the polar bears, so it’s hardly breaking news that humans are going to suffer because nature is suffering. But what is new about this model is the degree of geographic specificity.

It pinpoints the places where projected environmental losses overlap with human populations who depend on those resources and maps them with a nifty interactive viewer. This model identifies not just the general ways climate change harms the environment and how people will feel those changes, but also where these changes will likely occur, and how significant they’ll be. Pour une recherche scientifique au profit de l’agroécologie. 21 sept. 2020 Jancovici : Il était une fois l'énergie, le climat, et la relance post-covid - EIVP - 21/09/2020. Texte de la pétition: A London University Just Banned Beef to Fight Climate Change - Urge the University of California System to Follow Suit!

McDonald's Dupes Customers Into Thinking Its Beef Will Be Eco-Friendly. Should We Fight Climate Change By Taxing Meat?