E-Waste - Connecticut. "We have forgotten how to be good guests, how to walk lightly on the earth as its other creatures do. 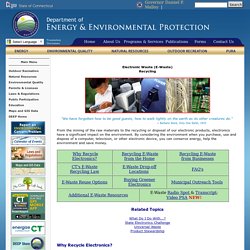 " ~ Barbara Ward, Only One Earth, 1972 From the mining of the raw materials to the recycling or disposal of our electronic products, electronics have a significant impact on the environment. By considering the environment when you purchase, use and dispose of a computer, television, or other electronic device, you can conserve energy, help the environment and save money. Related Topics Why Recycle Electronics? Computers and televisions are only part of the consumer electronics waste stream which also includes VCRs, radios, cell phones, and small appliances. Careful disposal of these items is important because many electronic products contain hazardous components. Responsible recycling and disposal of e-waste can help prevent exploitation of people in lesser developed countries where much of the e-waste from the U.S. has historically been disposed. 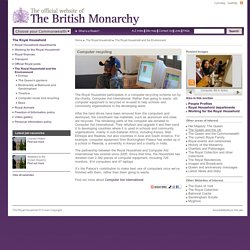 Rather than going to waste, old computer equipment is recycled or re-used to help schools and community organisations in the developing world. After the hard drives have been removed from the computers and destroyed, the constituent raw materials, such as aluminium and steel, are recycled. The remaining parts of the computer are donated to Computer Aid International.

They refurbish and upgrade it and then send it to developing countries where it is used in schools and community organisations, mainly in sub-Saharan Africa, including Kenya, Mali, Ethiopia and Rwanda, but also countries in Asia and South America. For example, computer equipment from Buckingham Palace has ended up in a school in Rwanda, a university in Kenya and a charity in India. The partnership between the Royal Household and Computer Aid International has existed since 2005. World's mountain of electrical waste reaches new peak of 42m tonnes. A record amount of electrical and electronic waste was discarded around the world in 2014, with the biggest per-capita tallies in countries that pride themselves on environmental consciousness, a report said. 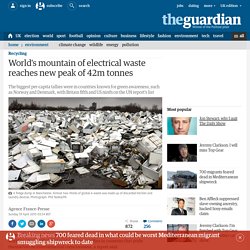 Last year, 41.8m tonnes of so-called e-waste – mostly fridges, washing machines and other domestic appliances at the end of their life – was dumped, the UN report said. That’s the equivalent of 1.15m heavy trucks, forming a line 23,000km (14,300 miles) long, according to the report, compiled by the United Nations University, the UN’s educational and research branch. Less than one-sixth of all e-waste was properly recycled, it said.

In 2013, the e-waste total was 39.8m tonnes – and on present trends, the 50-million-tonne mark could be reached in 2018. Topping the list for per-capita waste last year was Norway, with 28.4kg (62.5lbs) per inhabitant. The region with the lowest amount of e-waste per inhabitant was Africa, with 1.7kg per person. E-waste: The Environmental Crisis You've Never Heard Of. The E-Waste Crisis In 2008, 60 Minutes ran a piece revealing what actually happens to our old electronics when we throw them away. 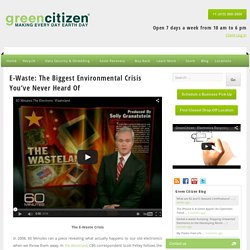 In The Wasteland, CBS correspondent Scott Pelley follows the trail of electronic waste (e-waste) all the way to China. There, he finds fields of old computers and TVs from America lit on fire by locals looking to burn away plastics and valuable metals (see pictures below). Pelley also interviews National Resource Defense Council senior scientist Allen Hershkowitz about the rapid increase e-waste. Hershkowitz cites the staggering statistic that Americans throws away 130,000 computers every day.

Well, the short answer is worse. Yet, as eye-catching as these numbers are, the problem of e-waste has largely flown under the radar. As a society, we generally refuse to pay for things to be recycled. But here is the kicker, doing the wrong thing it isn’t actually free, and doing the right thing doesn’t have to be costly. This is where GreenCitizen steps in. Electronic waste. Defective and obsolete electronic equipment Electronic waste or e-waste describes discarded electrical or electronic devices. 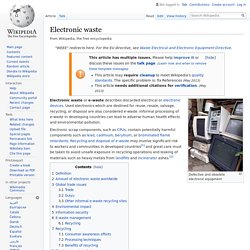 Used electronics which are destined for reuse, resale, salvage, recycling, or disposal are also considered e-waste. Informal processing of e-waste in developing countries can lead to adverse human health effects and environmental pollution. Electronic scrap components, such as CPUs, contain potentially harmful components such as lead, cadmium, beryllium, or brominated flame retardants. Recycling and disposal of e-waste may involve significant risk to workers and communities in developed countries[1] and great care must be taken to avoid unsafe exposure in recycling operations and leaking of materials such as heavy metals from landfills and incinerator ashes.[2] Definition[edit] Hoarding (left), disassembling (center) and collecting (right) electronic waste in Bengaluru, India Amount of electronic waste worldwide[edit] A fragment of discarded circuit board.