Waste & Incompetence in the EU 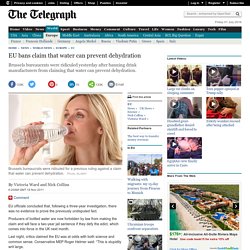 The Department for Health disputed the wisdom of the new law. A spokesman said: “Of course water hydrates. While we support the EU in preventing false claims about products, we need to exercise common sense as far as possible. " German professors Dr Andreas Hahn and Dr Moritz Hagenmeyer, who advise food manufacturers on how to advertise their products, asked the European Commission if the claim could be made on labels. They compiled what they assumed was an uncontroversial statement in order to test new laws which allow products to claim they can reduce the risk of disease, subject to EU approval.

They applied for the right to state that “regular consumption of significant amounts of water can reduce the risk of development of dehydration” as well as preventing a decrease in performance. EU wastes migrant aid millions with 'chaotic and badly managed' projects. Significantly for the Turkey deal, it found that €20 million worth of projects to deport migrants back to the EU’s neighbouring states are “having little impact”. 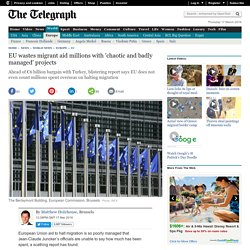 It also warned that the EU is paying only lip-service to human rights concerns. “Respect for human rights, which should underpin all actions, remains theoretical and is only rarely translated in practice.” It found that a €10 million project in the Sahara to intercept migrants before they can reach Europe contained “no thought” to a mechanism for responding to human rights violations. It was suspended amid protests from charities and reports that found “numerous human rights violations in detention centres”. EU-funded projects in “awful” Ukrainian detention centres contained no training on compliance with international human rights law, despite the treatment of detainees being “repeatedly criticised” by international organisations. 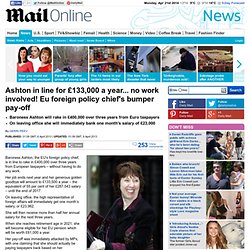 Her job ends next year and her generous golden goodbye will amount to £133,500 a year – the equivalent of 55 per cent of her £287,543 salary – until the end of 2017. On leaving office, the high representative of foreign affairs will immediately get one month’s salary, or £23,962. EU's £2.4bn ad budget higher than Coca-Cola's: Huge amount revealed in new 'fiscal factbook' that also details how it has 44 diplomats in Barbados. New analysis shows how EU spends the billions it receives from Britain and other member countriesGermany is the only member country to contribute more to spending than UK£265,000 spent on cocktail parties and £160,000 on Hungarian dog centre that is yet to be built By Steve Doughty, Social Affairs Correspondent Published: 22:16 GMT, 29 September 2013 | Updated: 10:48 GMT, 30 September 2013 The 'fiscal factbook' sheds light on how the EU spends the billions of pounds it receives from Britain and other member countries The European Union spends more on advertising than the drinks giant Coca-Cola, according to a new analysis of how Brussels uses our money. 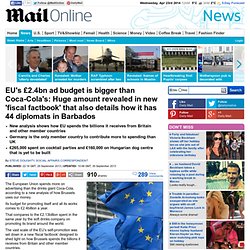 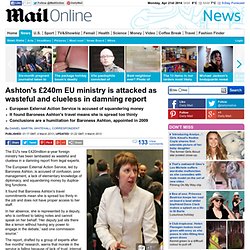 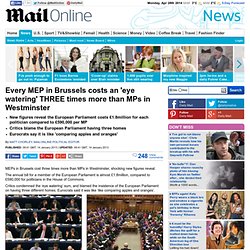 The annual bill for a member of the European Parliament is almost £1.8million, compared to £590,000 for politicians in the House of Commons. Critics condemned the ‘eye watering’ sum, and blamed the insistence of the European Parliament on having three different homes. The average cost of an MEP is almost £1.8million, almost three times the £590,000 bill for MPs in the Commons David Cameron has repeatedly demanded cuts in the running costs of the entire European project. 'Of course one might say that these differentials are right and proper. MEPs caught on camera 'turning up to work for just a few minutes a day in order to claim ¿300 expenses' Two politicians filmed lashing out at reporter when challenged over claims By Tom Gardner Published: 17:34 GMT, 25 June 2013 | Updated: 07:14 GMT, 5 July 2013. 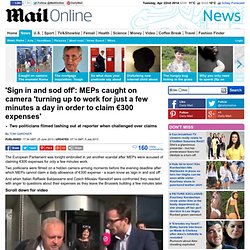 EU brainwash our children. The call comes after a new video shows the EU official responsible for teaching aids for UK schools blatantly admitting the desire to get to youngsters “early enough”. 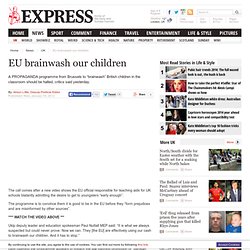 The programme is to convince them it is good to be in the EU before they “form prejudices and are misinformed by other sources”. Baroness Ashton's 500-strong army of EU chauffeurs (including one who is paid £62,000 a year) EU's diplomatic service now employs almost 500 drivers to ferry officials between meetingsThe most expensive vehicle bought for the diplomatic service cost £182,695Baroness Ashton, who is paid a salary of more than £250,000 as well as lavish expenses, is the highest paid female politician in the worldShe also enjoys the use of a bulletproof car with two chauffeurs, and a lavish grace-and-favour home in Brussels. 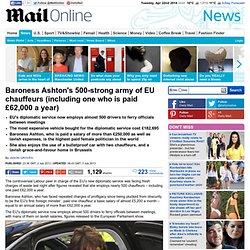 60 reasons to loathe the EU. • Tony Blair: It's time for a European President 4 The Commission’s budget dedicates £6.3million to “inter-institutional co-operation in the social sphere” which funds holiday centres, staff clubs, sports centres and medals for long-serving or retiring staff. 5 Across the EU there are 15 private European Schools for staff, run at a cost of £122million per year. 6 MEPs’ salaries cost the European taxpayer £52.6million per year but their travel expenses are £66.8million. 7 The European Parliament’s £3.9million budget to cover the cost of staff joining, transferring or leaving last year included compensation for a probationary official “because his work is obviously inadequate”. 8 About £5.1million is set aside to run the European Parliament’s vehicle fleet, which includes chauffeur-driven cars and a bicycle collection. 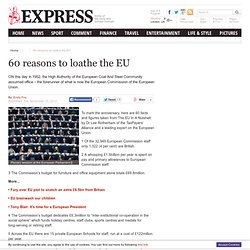 EU blow £850,000 refurbishing Brussels visitor centre even though it gets fewer visitors than Cumbria pencil museum. Newly relocated European Commission Visitor Centre cost £853,000 But free centre gets 30,000 fewer visitors than £4.25-a-head Pencil Museum By Rosie Taylor Published: 11:06 GMT, 22 June 2013 | Updated: 11:36 GMT, 22 June 2013 The European Union has spent £850,000 moving and upgrading a visitor centre even though it only received 50,000 people a year. In contrast, the Pencil Museum in the Lake District town of Keswick, receives more than 80,000 visitors a year, who pay up to £4.25 a head for entry. 3,000 Eurocrats who earn more than David Cameron (and they get 93 DAYS holiday a year) EU officials work a basic 37 and a half hour weekThey receive 18 public holidays, including 'Europe day', and are also entitled to a 16 per cent bonus if they work outside their country of originIt comes after it was revealed EU officials quaffed £120 bottles of wine as they discussed austerity measures Former PM Tony Blair has now joined the fight with sceptics By Daniel Martin, Whitehall Correspondent.

EU expenses: MEPs in Brussels earn up to 740% more than average citizen and enjoy free haircuts and gallons of petrol. MEP perks receive free haircuts and 52 gallons of petrol a month Their salaries cost £137million a month but do not include allowancesResearch finds French MEPs earn 740% more than average French citizen By Jason Groves for the Daily Mail and Allan Hall In Berlin for MailOnline Published: 11:44 GMT, 23 May 2013 | Updated: 17:36 GMT, 29 May 2013 Huge salaries and lavish expenses are allowing Members of the European Parliament to live like ‘latter-day Roman senators’, a report warned yesterday.

The shocking study found that cosseted MEPs now have incomes up to 20 times higher than the people they represent. While millions of families across Europe have had their incomes squeezed, most MEPs have enjoyed large increases in their salaries – while continuing to vote through ever-higher budgets for the EU. Arghhh! Average pension per month to retired eurocrats is now Â£5210 net. Demands by the Commission for more (lots more) money in both the 2013 budget and the long term 2012-2020 budget has been raising the ill-humour in negotiations with member states.

Not surprising then that a couple of EU diplomats have been dropping some bomblets into conversations around Brussels: such as comments on just what sort of loot retired eurocrats have been getting. The present reckoning is that the average pension payment to eurocrats who have retired from administration - that is, those eurocrats who were working at the salary regions below the beyond-belief payment levels of such men as commission president Barroso - is now €6,500 a month net, or £5,210.

As for that fabulous net payment to former middling paper pushers and regulation inventors at Berlaymont, a question to the commission spokesman today resulted in a statement that the commission doesn't keep a running record of pension averages. EU budget fraud may be more than £4BILLION which is 12 times higher than previous figure. A European Commission spokesman said: ‘The Commission welcomes the report as a positive contribution to further stepping up the fight against fraud on the EU budget.It supports most of the report's recommendations and hopes they will be taken up by UK authorities.The Commission operates a zero-tolerance policy to fraud, and has taken many measures to tighten its stance against it.In the last two years alone, the Commission has put forward over a dozen proposals / initiatives to improve the fight against fraud in EU funds.The Commission is constantly calling on Member States to take their responsibilities more seriously in protecting the EU budget.’Officials 'failed to give realistic assessment of how much money lost'EU's cohesion fund and agriculture were areas 'most susceptible' to fraudHouse of Lords committee condemned Treasury for lack of help with inquiry.

As the nations of Europe lie bleeding, the eurocrats' party goes on. Reckless waste that will cost Britain £22,000 every minute. The Eurocrats who earn £80,000 - and it's all funded by the taxpayer. EU 'can save £33bn a year by cutting waste perks and quangos. Nice work if EU can get it! Brussels sets up £2million Barbados HQ with 39 staff to hand out hundreds of millions in grants to banana growers. Seventy-six Eurocrats fail to come up with a suitable name for a CORRIDOR and refer the matter to a committee. £7m TV channel and WWII airbrushed from European history... eurocrats are spending like never before. The European Commission proposes 6.8% increase in EU spending despite austerity.