The Deathly Effects of E-Waste. Trashing our old electronics could be putting millions of people at risk. 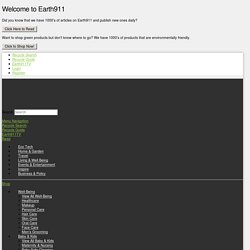 Photo: Shutterstock Many people in developed countries seem to think that the electronics they dispose of float up into the magical used-technology land in the sky. Such is not the case. According to a recent report by the BBC, e-waste pollution is causing severe health concerns for millions of people around the world, mostly in the developing nations of Africa, Europe and Asia. Approximately 23 percent of deaths in these nations are linked to pollution and other environmental impacts.

Read the report. Related: Fix Gadgets Through iFixit.com. E-Waste. What is e-waste? 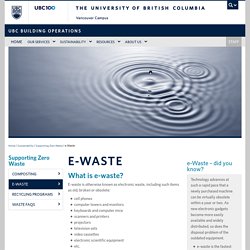 E-waste is otherwise known as electronic waste, including such items as old, broken or obsolete: cell phonescomputer towers and monitorskeyboards and computer micescanners and printersprojectorstelevision setsvideo cassetteselectronic scientific equipmentetc. Electronic waste is piling up. Here’s why you should care. Be honest: How many old cell phones do you have in a drawer somewhere? 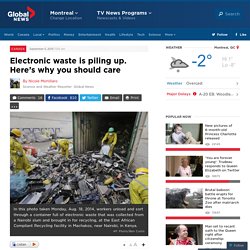 What about computer keyboards or screens? Electronic waste. Major Threats From E-Waste: Current Generation And Impacts. Waste from used electrical and electronic equipment – commonly known as e-waste or WEEE – is one of the fastest growing solid waste streams around the world today. 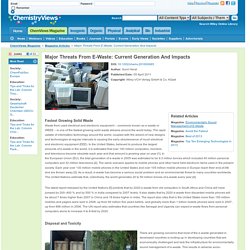 The rapid uptake of information technology around the world, coupled with the advent of new designs and technologies at regular intervals is causing the early obsolescence of much electrical and electronic equipment (EEE). In the United States, believed to produce the largest amounts of e-waste in the world, it is estimated that over 100 million computers, monitors and televisions become obsolete each year and that amount is growing year on year [1]. In the European Union (EU), the total generation of e-waste in 2005 was estimated to be 9.3 million tonnes which included 40 million personal computers and 32 million televisions [2]. The same scenario applies to mobile phones and other hand held electronic items used in the present society. Dr. Dr. Webpage of Sunil Herat References. Shift Recycling. More than 140,000 tonnes of e-waste accumulates in Canadian landfills each year. 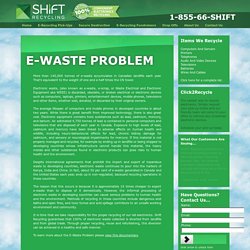 That's equivalent to the weight of one and a half times the CN tower. 01 dittke. The Human and Environmental Effects of E-Waste. (April 2013) Roughly 40 million metric tons of electronic waste (e-waste) are produced globally each year, and about 13 percent of that weight is recycled mostly in developing countries. 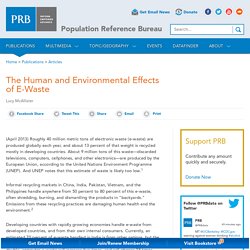 About 9 million tons of this waste—discarded televisions, computers, cellphones, and other electronics—are produced by the European Union, according to the United Nations Environment Programme (UNEP). And UNEP notes that this estimate of waste is likely too low.1 Informal recycling markets in China, India, Pakistan, Vietnam, and the Philippines handle anywhere from 50 percent to 80 percent of this e-waste, often shredding, burning, and dismantling the products in "backyards. " Emissions from these recycling practices are damaging human health and the environment.2 Developing countries with rapidly growing economies handle e-waste from developed countries, and from their own internal consumers. 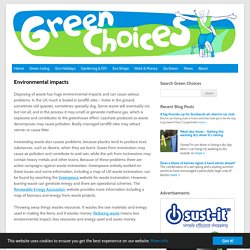 In the UK much is buried in landfill sites – holes in the ground, sometimes old quarries, sometimes specially dug. Some waste will eventually rot, but not all, and in the process it may smell or generate methane gas, which is explosive and contributes to the greenhouse effect. Leachate produced as waste decomposes may cause pollution. Badly-managed landfill sites may attract vermin or cause litter. Waste Disposal. Each time you throw something as garbage, think of where it will finally end up. 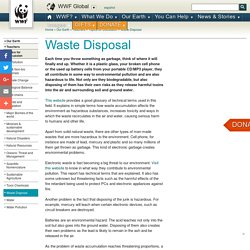 Whether it is a plastic glass, your broken cell phone or the used up battery cells from your portable CD/MP3 player, they all contribute in some way to environmental pollution and are also hazardous to life. Not only are they biodegradable, but also disposing of them has their own risks as they release harmful toxins into the air and surrounding soil and ground water. This website provides a good glossary of technical terms used in this field. It explains in simple terms how waste accumulation affects the environment as hazardous substances, increases toxicity and ways in which the waste recirculates in the air and water, causing serious harm to humans and other life. Apart from solid natural waste, there are other types of man-made wastes that are more hazardous to the environment.

Electronic waste is fast becoming a big threat to our environment. Batteries are an environmental hazard. Environment Canada - Pollution and Waste - Environment Canada. Urban Waste Management Issues. What is waste and why is it a problem? Waste, or rubbish, trash, junk, garbage, depending on the type of material or the regional terminology, is an unwanted or undesired material or substance. 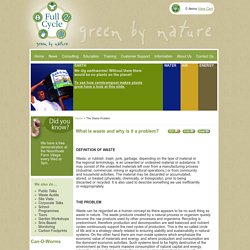 It may consist of the unwanted materials left over from a manufacturing process (industrial, commercial, mining or agricultural operations,) or from community and household activities. The material may be discarded or accumulated, stored, or treated (physically, chemically, or biologically), prior to being discarded or recycled. It is also used to describe something we use inefficiently or inappropriately. Waste can be regarded as a human concept as there appears to be no such thing as waste in nature. The waste products created by a natural process or organism quickly become the raw products used by other processes and organisms. The Problems with Waste. "Recycling. 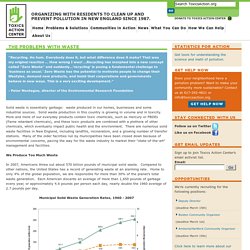 Ho hum. Everybody does it, but what difference does it make? That was my original reaction … How wrong I was! …Recycling has morphed into a new concept called "Zero Waste" and suddenly…’recycling’ is posing a fundamental challenge to ‘business as usual.’ What To Do About E-Waste. A helpful how-to guide for keeping your computers, cell phones and other used electronics out of landfills.

Our increased reliance on personal technology—laptops, cell phones, PDAs, computer monitors, printers--has resulted in vast quantities of garbage in landfills and incinerators that could have been reused or recycled. About 2.6 million tons of e-waste ended up in landfills in 2007, according to the U.S. Environmental Protection Agency, while only 13.6 percent (408,000 tons) was recycled.

If Americans recycled the more than 100 million cell phones that are no longer used,the amount of energy saved would be enough to power approximately 24,000 U.S. households for one year. A Shopper's Guide to Home Tissue Products. 1. Buy paper products with recycled content -- especially post-consumer fibers. Look for products that have a high recycled content, including high post-consumer content.

Post-consumer fibers are recovered from paper that was previously used by consumers and would otherwise have been dumped into a landfill or an incinerator.