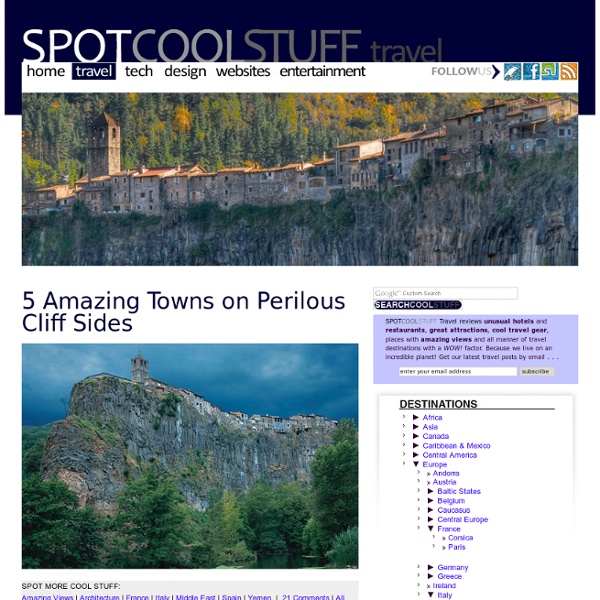 Spot Cool Stuff loves a good cliff-side town. There’s something about them that’s romantic, daring and a little impossible. Here are five of our favorites places where no one with vertigo would want to live: Castellfollit de la Roca, Spain Castellfollit de la Roca, in the Catalonia region in the middle of Spain, has a doubly impressive location—this 1,000 person village is perched on a spit of land with cliffs on both sides. LEARN MORE | READ | ShareThis Manarola, Italy The uber-colorful Italian village of Manarola is not the most precariously placed cliff-side settlement of the five in this review. LEARN MORE | READ | MANAROLA B&Bs | BUY WINE ONLINE | ShareThis Al Hajjarah, Yemen Yemen is one of Spot Cool Stuff’s favorite travel countries (though, sadly, these days the security situation there for travelers is spotty). LEARN MORE | READ | ShareThis Bonifacio, France Many of the planet’s cliff-side towns were originally built in their location for some military reason. Ronda, Spain

28 of history's most fascinating photos The Statue of Liberty surrounded by scaffolding as workers complete the final stages in Paris. Circa 1885. An Royal Air Force pilot getting a haircut during a break between missions, Britain, 1942 Bob Marley on the beach with Miss World 1976 Cindy Breakspeare, mother of Damien Marley. Ethnomusicologist Frances Densmore recording the music of a Blackfoot chief onto a phonograph, 1916. A napalm attack near U.S. troops on patrol in South Vietnam, circa 1966. Fritz, a television celebrity bulldog, is shaved by a Californian barber. A female Lebanese fighter, 1982. Woodstock – The Opening Ceremony. Chester E. Beautiful color image of the German Focke-Wulf Fw 190A-5 fighters, of Fighter Squadron JG54, during flight, 1943. Attorney at law, Mohandas Gandhi, 1893. In the aftermath of the D-Day invasion, two boys watch from a hilltop as American soldiers drive through the town of St. Benjamin, the last Tasmanian Tiger, at Beaumaris Zoo, 1933. Corporal Luther E. Charlie Chaplin without makeup.

LESSON PLANS - The Learning Network Blog Video “I think everyone should have wings, just like the birds. But since we don’t have wings, we fly kites.” High above Rio de Janeiro’s crowded favelas, kites soar and dive — and attack. In this short documentary, we learn how kite fighting is more than just a simple pastime for the young people holding the strings. Read more… In anticipation of our third annual Student Editorial Contest (to be announced on Feb. 25), we’ve done the math, and below you’ll find the 100 most-commented-upon questions we’ve ever asked that call for persuasive writing. Many of them are, of course, on topics teenagers care about — technology, video games, sports and gender issues. But, perhaps unsurprisingly, the broad topic that seems to engage students the most? So skim the list and pick issues that interest you. Read more… In this short documentary, a talented teenager in the Mojave Desert is torn between ​​​her goal of attending art school and wanting to help support her family. Read more… Read more… Read more…

ASTRONOMICA by Larry Carlson 2010 File:EXCOMM meeting, Cuban Missile Crisis, 29 October 1962.jpg Teufelsberg: A Graffiti Paradise at an Abandoned Spy Station “I know! Let’s go hike through the snow, up a mountain, to an abandoned spy building to see some graffiti!” I think I started turning a bit nutty while in Berlin. Who was this person and what did they do with warm weather Erica? Was I really willing to go through an impending snowstorm to head to Teufelsberg? It must have rubbed off on me here as Berliners are some of the most resilient people I’ve ever seen. In preparation, we got some advice from people living in Berlin about how to get there. “Oh, once you get off at Gruneswald, you will see it. So we did… except… you can’t see anything BECAUSE THERE IS A GIANT FOREST IN FRONT OF YOU. After some wandering, we figured out that when you get off of the S-Bahn stop you need go under the highway and through the park. Once you get to the top you have two choices: 1. 2. However, the biggest plus about making the trek on a snowy weekday is that we were the ONLY people at Teufelsberg. If you come, plan for at least an hour.

File:U-2 photo during Cuban Missile Crisis.jpg Twenty-Two Reasons to Turn to Your Journal for Catharsis and Creativity by Noelle Sterne Over mugs of herb tea at our favorite café, my friend Anna, a travel writer, slumped in her chair. "What am I going to do?" A few months ago, Anna got her first substantial assignment from a prestigious inflight magazine. So here we were in the café, Anna twisting her cup and staring at me. I asked Anna why she thought the block had descended now. "Anna," I asked, "Do you keep a journal?" She waved her hand, dismissing the thought, "Used to. "Try it," I said. "What's the point? "That's exactly the point," I said. Anna said nothing but, to my surprise, pulled out the notebook that always lived in her handbag. Many writing teachers advise journal writing, and many veteran writers have kept faithful journals for years. After Anna sent off her article, we talked about how the journal had helped her, and what writers can do to keep their journals flowing. Set Up Your Journal 1. 2. 3. 4. 5. 6. 7. Surrender to Your Journal 8. I express myself easily and fully. 9. 10. 11. 12. 13.

File:U2 Image of Cuban Missile Crisis.jpg Ten Remedies to Demolish an Unexpected Block by Noelle Sterne Your fingers play the computer keyboard like a concert pianist, your pens run dry with astounding speed, your pages pile up like gold. "Wow," you think, "this is how it should be! But then, faster than a form rejection, more powerful than an editor's frown, able to freeze you in a single flash, a horrible thought zaps you: I can't stand it anymore! What! When we're blocked in the usual ways, the reasons are pretty clear -- the infinitesimal progress, the search for the ever-elusive perfect word, the unshakable suspicion that, despite all our sweat, what we've written is still no good. The answers aren't easy. Psychologist and personal growth specialist Gay Hendricks offers insight in his book, The Big Leap. Hendricks admits with candor that he discovered his own "Upper-Limit Problem" early in his career. And so with our writing. But if in this state we quit, we're only defeating ourselves and our writing goals. The first five will shake up your body: 1. 2. 3. 4. 5. 6. 7.

Keeping a Writer's Journal: 21 Ideas to Keep You Writing Keeping a Writer's Journal: 21 Ideas to Keep You Writing by Sheila Bender Return to Creative Nonfiction · Print-Friendly Version Keeping a journal is one of the best tools to practice trusting your writing and to make sure you keep writing. You can keep a journal in a cheap or an expensive notebook, on scraps of paper dropped into a box, in computer files or in letter form. Just as long as you write as much and as often as you can without editing yourself and you have access to the words you've written, you are keeping a journal. If you haven't been journaling or doing it as often as you wish, think about where you write and when you are likely to have time to write. It may seem intimidating to develop the journal-keeping habit, and you may be thinking defeatist thoughts already, such as "I can't do this regularly forever. Make a specific commitment for a month. Next, make a commitment to the same system or to a new journal-keeping system for an additional month. Idea 1: A Travel Journal

10 Creative Block Breakers That Actually Work Doesn't matter what you call it: writer's block or creative block or simply "Where is my inspiration when I need it?!" All creative individuals find their work coming less easily at some times than others. That's when you need strategies, and plenty of them. There are at least 90 such tips, tools, and techniques in , edited by Alex Cornell, with a foreword by Erik Spiekermann. is a fresh compilation of practical, real world solutions offered by a range of creative individuals, including graphic designers, artists, writers, and photographers. The insights in this perkily designed, light-hearted, and useful little volume are sometimes amusing, often unexpected. to find it more compelling. Place an ink-stained handprint on its blankness so you have something to fix. You can't criticize the results. Consider this: "I'm not running out of ideas, just trying to push myself into better ones." in your episodes of creative block. to conceive of your blocks. , not just one. Blocked?

57 Tips For Writers, From Writers The entire writing process is fraught with perils. Many writers would argue that the hardest part of writing is beginning. When asked what was the most frightening thing he had ever encountered, novelist Ernest Hemingway said, “A blank sheet of paper.” Other writers believe that ideas are easy, it’s in the execution of those ideas that the hard work really begins. You have to show up every day and slowly give shape to your ideas, trying to find just the right words, searching for the right turn of phrase, until it all morphs into something real. So just how do you go about facing an empty page, coaxing your ideas into the world of form, and steering the end result toward shore? Tips For Writers From Stephen King “If you want to be a writer,” says Stephen King , “you must do two things above all others: read a lot and write a lot.” King, who has written over 50 books, emphasizes that writers have to be well-read. Tips For Writers From John Grisham Tips For Writers From Erica Jong 1. 2. 3. 4.