Potent LastPass exploit underscores the dark side of password managers. Developers of the widely used LastPass password manager are scrambling to fix a serious vulnerability that makes it possible for malicious websites to steal user passcodes and in some cases execute malicious code on computers running the program. 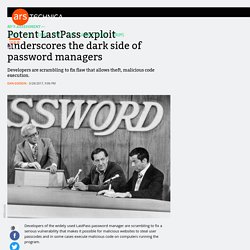 EU to Propose New Measures for Accessing Encrypted IM Apps. The European Commission, through the voice of EU Justice Commissioner Vera Jourova, announced plans to find a way for law enforcement to access data exchanged via encrypted instant messaging services, such as WhatsApp, Telegram, Signal, and others. 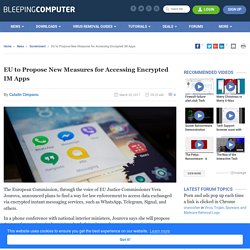 In a phone conference with national interior ministers, Jourova says she will propose three or four options in June, aimed at helping law enforcement investigations. Whatever EU legislators decide, Jourova and other EU members said encryption backdoors are currently off the table, since they do more harm than good. EU hopes for a voluntary agreement The official hopes that IM providers will be open to the idea of providing voluntary access to law enforcement, and the Commission won't be forced to propose official legislation. The EU hopes companies react like Microsoft, which recently responded to law enforcement requests for data on the London terrorist Khalid Masood in 30 minutes. Critical thinking is one for the history books. The world as a whole has become increasingly reliant on science to provide its technology and inform its policy. 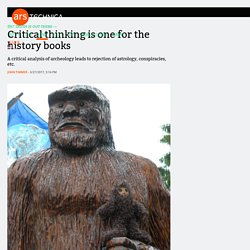 Intel’s first Optane SSD for regular PCs is a small but super-fast cache. Intel is positioning its new Optane technology as the next big advancement in computer storage after SSDs, and today it's announcing the first consumer product based on the technology. 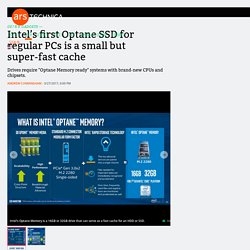 The "Intel Optane Memory" drives are 16GB and 32GB M.2 sticks that can be paired with a larger SSD or HDD to speed up total system performance. Intel's Rapid Storage Technology allows your PC to see the two drives as one storage volume, and the software automatically caches important data to the faster drive. Feds: Brooklyn prosecutor forged judges’ signatures to wiretap lover. A former county prosecutor in New York was indicted Monday on federal charges of illegally wiretapping two phones. 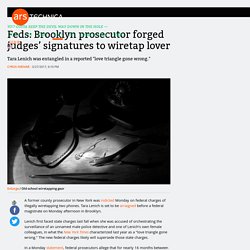 Tara Lenich is set to be arraigned before a federal magistrate on Monday afternoon in Brooklyn. Lenich first faced state charges last fall when she was accused of orchestrating the surveillance of an unnamed male police detective and one of Lenich’s own female colleagues, in what the New York Times characterized last year as a "love triangle gone wrong. " The new federal charges likely will supersede those state charges.

Millimeter telescope array spots early galaxies in “super halos” of gas. The early Universe can be studied by looking at light coming from distant galaxies. 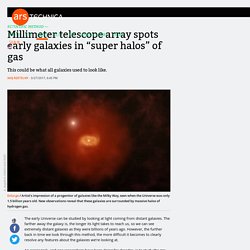 The farther away the galaxy is, the longer its light takes to reach us, so we can see extremely distant galaxies as they were billions of years ago. Uncovered iPad bomb plot blamed for electronics ban on some flights. Activists want to know why feds are searching more devices at the border. A free speech advocacy organization sued the Department of Homeland Security and Immigration and Customs Enforcement on Monday, seeking "statistical, policy, and assessment records regarding the government’s searches" of digital devices at the United States border. 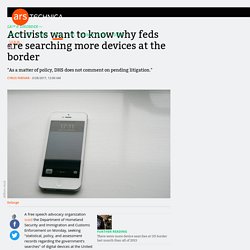 W3C Pushes Past Critics as DRM Gets Closer to Becoming an Official Web Standard. Internet-Connected Medical Washer-Disinfector Found Vulnerable to Hacking. Internet-of-Things devices are turning every industry into the computer industry, making customers think that their lives would be much easier with smart devices. 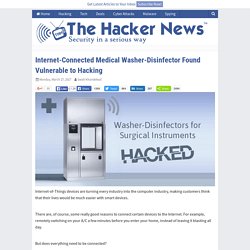 There are, of course, some really good reasons to connect certain devices to the Internet. UK Demands Encryption Backdoor As London Terrorist Used WhatsApp Before the Attack. The government has once again started asking for backdoor in encrypted services, arguing that it can not give enough security to its citizens because the terrorists are using encrypted apps to communicate and plot an attack. 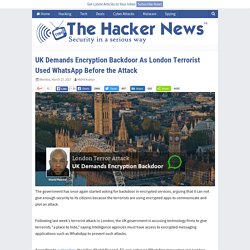 Following last week's terrorist attack in London, the UK government is accusing technology firms to give terrorists "a place to hide," saying Intelligence agencies must have access to encrypted messaging applications such as WhatsApp to prevent such attacks. According to authorities, the killer, Khalid Masood, 52, was active on WhatsApp messaging app just two minutes before he attacked Britain's Houses of Parliament in Westminster that killed four people. Tinker, Torrentor, Streamer, Spy: VPN privacy alert - CSIRO blog. Mars’ moons could be remnants of earlier rings, destined to form a new one. The one Yahoo meme that perfectly represents the faltering company. “Dig once” bill could bring fiber Internet to much of the US. Years in the making, a proposal to mandate the installation of fiber conduits during federally funded highway projects might be gaining some new momentum. 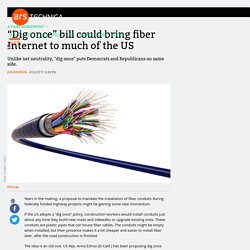 If the US adopts a "dig once" policy, construction workers would install conduits just about any time they build new roads and sidewalks or upgrade existing ones. These conduits are plastic pipes that can house fiber cables. The conduits might be empty when installed, but their presence makes it a lot cheaper and easier to install fiber later, after the road construction is finished. Highlights doesn’t kid around when it comes to science and tech. Group that found VW cheating says costs of fuel efficiency have been overstated. It won’t cost automakers nearly as much as they said it would to fit new cars with carbon-saving technology over the next decade, a nonprofit transportation research group says. An economic analysis performed by the International Council on Clean Transportation (ICCT) found that, given recent improvements in auto technology, the EPA’s rigorous study to determine 2025 fuel efficiency standards may have been too conservative, in some cases overstating the per-car cost of implementing carbon-reducing technologies by 40 percent.

The analysis comes at a time when the Trump administration has moved to undo the fuel efficiency standards imposed by the EPA in January under the Obama administration. Trump’s EPA has claimed that asking the auto industry to meet fuel efficiency standards of more than 50 mpg by 2025 would cost American jobs. According to the ICCT, the impact of complying with those original fuel efficiency standards wouldn’t be as dramatic as the current administration suggests. Streaks on Martian slopes might not be caused by water. The evidence for liquid water on the surface of Mars in the distant past is strong, but a discovery a few years ago provided a glimmer of hope that the wet stuff might still be making occasional appearances on the Red Planet.

Photovoltaic ink could lead to easy solar panel manufacture. Currently, silicon is the dominant technology for photovoltaic solar power. There are a handful of competing thin-film technologies, which are easier to manufacture but rely on more expensive raw materials and don't reach the same efficiencies as silicon.

The trade offs between these two technologies have helped drive research into a third: perovskite solar cells, which rely on cheap and abundant raw materials but have the potential for much higher efficiencies. Still, perovskites have two significant issues. One is that the ability to integrate them into mass production techniques hasn't been demonstrated. Low levels of simple chemical associated with aging, DNA damage. Approximately ten thousand times each day, the DNA in our cells receives some damage, but most of that damage is repaired by our cells' built-in DNA repair systems.

The efficiency of these DNA repair systems decline with age, however, and that's thought to lead to age-related health problems and cancer. A recent paper published in Science shows that a chemical used in the DNA repair process, nicotinamide adenine dinucleotide (NAD+), has a concentration that declines with age. This decline may drive the age-associated accumulation of DNA damage—a finding that suggests supplementing NAD+ might offset some of the effects of aging. The team behind the paper used human embryonic kidney cells (which grow well in the lab) to look at the role of this chemical.

Analysis of meta-analyses identifies where sciences’ real problems lie. Science is in a phase of pretty intense soul-searching. This blue-sky image of Pluto is absolutely stunning. New Attack "XSSJacking" Combines Clickjacking, Pastejacking, and Self-XSS. 14,766 Let's Encrypt SSL Certificates Issued to PayPal Phishing Sites. During the past year, Let's Encrypt has issued a total of 15,270 SSL certificates that contained the word "PayPal" in the domain name or the certificate identity. Wikileaks Reveals How CIA Was Hacking Your iPhones And MacBooks. As part of its "Vault 7" series, Wikileaks — the popular whistle-blowing platform — has just released another batch of classified documents focused on exploits and hacking techniques the Central Intelligence Agency (CIA) designed to target Apple MacOS and iOS devices.

Chinese Hackers have taken Smishing attack to the next level, using rogue cell phone towers to distribute Android banking malware via spoofed SMS messages. SMiShing — phishing attacks sent via SMS — is a type of attack wherein fraudsters use number spoofing attack to send convincing bogus messages to trick mobile users into downloading a malware app onto their smartphones or lures victims into giving up sensitive information. Hackers Threaten to Remotely Wipe 300 Million iPhones Unless Apple Pays Ransom. If you use iCloud to sync your Apple devices, your private data may be at risk of getting exposed or deleted by April 7th. It has been found that a mischievous group of hackers claiming to have access to over 300 million iCloud accounts is threatening Apple to remotely wipe data from those millions of Apple devices unless Apple pays it $75,000 in crypto-currency or $100,000 worth of iTunes gift cards.

Unpatchable 'DoubleAgent' Attack Can Hijack All Windows Versions — Even Your Antivirus! DRM in HTML5 takes its next step toward standardization. Uber president quits, says firm’s values are incompatible with his. Uber president Jeff Jones, a marketing expert who joined just six months ago to help soften Uber's abrasive image, has quit because his "beliefs and approach to leadership" were incompatible with what he "saw and experienced at Uber.

Google reduces JPEG file size by 35% Man accused of sending a seizure-inducing tweet charged with cyberstalking [Updated] Intel still beats Ryzen at games, but how much does it matter? Virtual machine escape fetches $105,000 at Pwn2Own hacking contest [updated] Some Firefox 52 Users on Linux Left Without Sound. Why Is Silicon Valley So Awful to Women? - The Atlantic. The Venture Firm Blockchain Capital Will Finance a Fund with an 'Initial Coin Offering'

It Begins: Bots Are Learning to Chat in Their Own Language. A Full Inventory of Trump's Proposed Environmental Program Cuts. Vannevar Bush - Wikipedia. Trump’s Budget Would Break American Science, Today and Tomorrow. WordStar: A writer’s word processor. Water bears can replace all the fluid in their bodies with a glass matrix. Gravitational waves may defeat new theories of gravity. Researchers Find Vulnerability in WhatsApp and Telegram's Web Clients. Another Years-Old Flaw Fixed in the Linux Kernel. Linux Kernel Gets Patch For Years-Old Serious Vulnerability. Laser pulse study could lead to ultrafast computers. Samsung's 'The Frame' TV doubles as an art piece. Federal judge temporarily suspends the revised travel ban. Stare into an active volcano with Google Street View. The Morning After: Thursday, March 16 2017. NASA plans to make a telescope out of the Sun. Dark matter is missing from young galaxies.

Wowing and washable: Google’s smart jacket wears and works well at first glance. Magnetic storage reaches the atomic level. Here’s the first 3D glimpse of how DNA is packaged up in a single cell. Google Launches Invisible reCAPTCHA with No User Interaction Required. Scientists Store One Bit of Data on a Single Atom — Future of Data Storage. Lawyer films his traffic stop, even after cop says not to, citing made-up law. Our new (mixed) reality: Early adopters have become HoloLens believers at work.