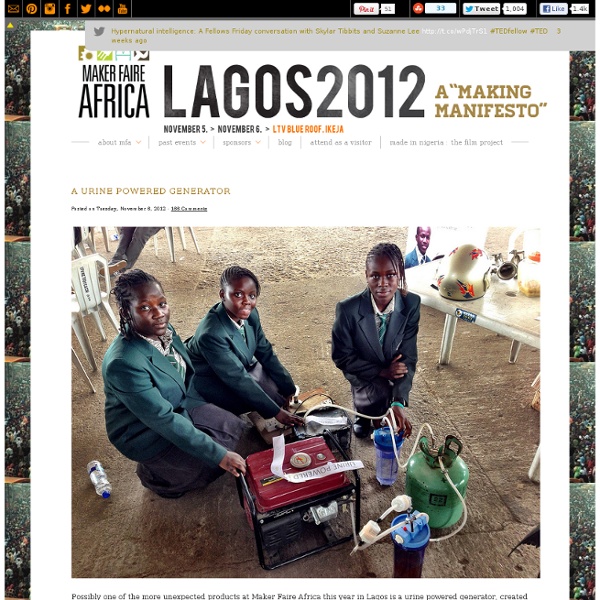 Posted on Tuesday, November 6, 2012 · 168 Comments Possibly one of the more unexpected products at Maker Faire Africa this year in Lagos is a urine powered generator, created by four girls. The girls are Duro-Aina Adebola (14), Akindele Abiola (14), Faleke Oluwatoyin (14) and Bello Eniola (15). 1 Liter of urine gives you 6 hours of electricity. The system works like this: Urine is put into an electrolytic cell, which separates out the hydrogen. Along the whole way there are one-way valves for security, but let’s be honest that this is something of an explosive device… Related:  Waste to Energy

Infographic Of The Day: Are U.S. Cities Like Detroit Really Dying? Flight to the suburbs, urban decay, ruin porn--we've all become yawningly familiar with these tropes of modern migration. But a set of fascinating new maps based on data from the 2000 and 2010 U.S. Census shows that, if you look really closely, those ho-hum trends aren't as simple as they seem. Would you believe that buried in the downtown heart of supposedly dead Detroit, there's actually been an influx of residents? You practically need a microscope to notice, but as DataPointed points out, you can clearly see a "speckled blue island surrounded by a sea of red" right smack in the city center. DataPointed calls this phenomenon "growth rings"--a clear ring of new suburbs circling the outskirts of the city, with declining areas inside it, and then a pulsing core of resurgent growth at the center. San Francisco: And New York: But the most tragic map is, of course, reserved for New Orleans, whose population base was devastated by Katrina:

Atomic Goal - 800 Years of Power From Waste Matthew Ryan Williams for The New York Times Ted Ellis of TerraPower working on a fuel system. Matthew Ryan Williams for The New York Times Ash Odedra, wearing glasses, the principal design engineer at TerraPower in Bellevue, Wash., a company that is being led by Bill Gates and Nathan Myhrvold, a fellow Microsoft billionaire. The quest is for a new kind of nuclear reactor that would be fueled by today’s nuclear waste, supply all the electricity in the United States for the next 800 years and, possibly, cut the risk of nuclear weapons proliferation around the world. The people developing the reactor work for a start-up, TerraPower, led by Mr. (Mr. “The hope is that we’ll find a country, with China being the most likely, that would be able to build the demo plant,” Mr. Perhaps one of the most intriguing arguments supporters make about Mr. In contrast, the TerraPower reactor makes more plutonium from the uranium 238 for use as fuel, and so would run almost entirely on uranium 238.

ited Nations News Centre - Nearly 870 million people chronically undernourished, says new UN hunger report 9 October 2012 – Almost 870 million people, or one in eight, are suffering from chronic malnutrition, according to a new United Nations report released today, which shows a sharp decline in the number of undernourished people over the past two decades, but warns that immediate action is still needed to tackle hunger particularly in developing countries. The State of Food Insecurity in the World 2012 (SOFI), which was jointly published by the Food and Agriculture Organization (FAO), the International Fund for Agricultural Development (IFAD) and the World Food Programme (WFP), reveals that the number of hungry declined more sharply between 1990 and 2007 than previously believed. The new estimates are based on an improved methodology and data for the last two decades, the agencies said in a news release. The world has the knowledge and the means to eliminate all forms of food insecurity and malnutrition

Stanford scientists use 'wired microbes' to generate electricity from sewage Engineers at Stanford have devised a new way to generate electricity from sewage, using naturally occurring "wired microbes" as mini power plants, producing electricity as they digest plant and animal waste. In a paper published today in the Proceedings of the National Academy of Sciences, co-authors Yi Cui, a materials scientist, Craig Criddle, an environmental engineer, and Xing Xie, an interdisciplinary researcher, call their invention a microbial battery. They hope it will be used in places such as sewage treatment plants, or to break down organic pollutants in the "dead zones" of lakes and coastal waters where fertilizer runoff and other organic waste can deplete oxygen levels and suffocate marine life. At the moment, however, their laboratory prototype is about the size of a D-cell battery and looks like a chemistry experiment, with two electrodes, one positive, the other negative, plunged into a bottle of wastewater. Of course, there is far less energy potential in wastewater.

Center for Social Inclusion This Microbial Battery Makes Power And Water From Poop And Pollution | Co.Exist | World changing ideas and innovation The idea of sewage-powered devices is not new. In fact, it’s existed for more than a century. But finding a particularly efficient (and cost-effective) version of microbial fuel cell technology has been an ongoing challenge for engineers. A new “microbial battery,” however, looks like a breakthrough on the efficiency side of the equation. Researchers at Stanford University say they’ve developed a battery that can convert some 30% of the energy of dissolved organic matter in wastewater into electricity, the same proportion of energy that solar cells can harvest from sunlight. Here's the science: Researchers Yi Cui, Craig Criddle, Xing Xie, and their team realized that the oxygen in their microbial fuel cell design was causing problems. So the researchers got rid of the membrane setup. Still, there’s a couple of caveats. "It's a very simple device," Criddle says. [Image: Electricity via Shutterstock]

As Asian-Americans’ Numbers Grow, So Does Their Philanthropy But this was not an old-money event. The donors were largely Korean immigrants and their children. Members of a new class of affluent Asian-Americans, many of whom have benefited from booms in finance and technology, are making their mark on philanthropy in the United States. They are donating large sums to groups focused on their own diasporas or their homelands, like the organization that held the fund-raiser, the Korean American Community Foundation. And they are giving to prestigious universities, museums, concert halls and hospitals — like Yale University and the Metropolitan Museum of Art. The institutions, in turn, are increasingly courting Asian-Americans, who are taking high-profile slots on their governing boards. SungEun Han-Andersen, a Korean immigrant who runs two family foundations and is on the boards of the New York Philharmonic and Boston University, said the philanthropic impulse was for the first time becoming deeply rooted within her circle of Korean acquaintances.

Waste-To-Energy plant ready to process holiday garbage - News Story - KXLY Spokane SPOKANE, Wash. - Christmas has come and gone, it's time to deal with all of those empty gift boxes and crumpled balls of wrapping paper, and Spokane's waste to energy plant workers are ready to take in your holiday garbage. All of your yuletide trash you take the waste-to-energy plant eventually ends up on the tipping floor of the waste incinerator. "It tends to plug up. From there the trash is loaded into the hopper in two-ton bites. "We destroy the volatile organics and other hazardous components in the garbage itself," Taam said. And at the same time the burning garbage super-heats the hot water pipes that surround the boiler and generate steam. "Steam into the turbine, turbine turns the shaft which turns the generator which makes electricity," Taam said. Enough electricity to power 13,000 homes and, waste-to-energy officials say, the plant creates no more air pollution than 10 wood stoves each day.

Strategic Relocation - North American Guide to Safe Places: Amazon.com United Utilities turns human waste to energy at plant 22 August 2011Last updated at 09:24 Human waste is being turned into energy in a multimillion-pound project in Lancashire. United Utilities is converting a by-product of waste water at its Blackburn plant into gas. The company is using the method to generate about 15% of the power it uses in its operations - equal to the power consumed in Burnley each year. The power generated helps run the sewage treatment works next to the United Utilities plant. The plant also exports highly nutritious fertilizer to agricultural land across east Lancashire for farmers free of charge. 'Sustainable power' The method uses biogas, which is produced when waste water sludge is broken down by microbes in a process known as anaerobic digestion. Steve Mogford, CEO of United Utilities, said: "The plant can process up to 168 mega-litres of sewage each day, which arrives from other United Utilities sites in a 15-mile radius, and includes industrial waste from the Inbev Brewery and the local BAE Systems operations.