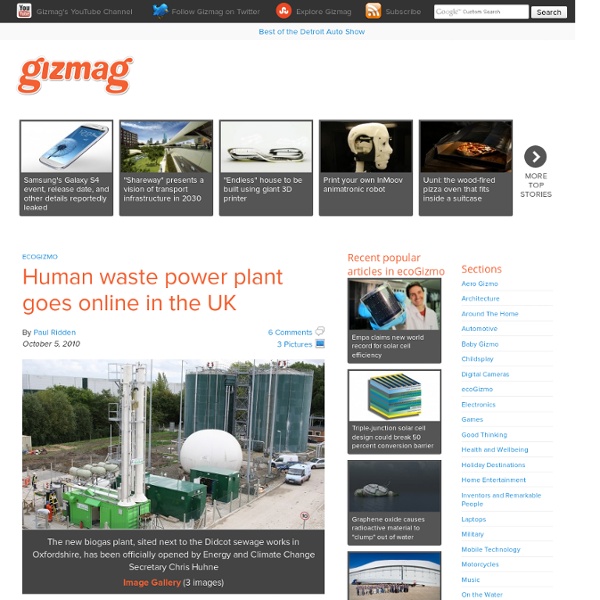 Cow Power potential is no bull July 24, 2008 Cows provide us with milk, meat, and leather jackets, but it’s possible that we’re turning our noses up at their most valuable offering to society. A study published in the Institute of Physics’ Environmental Research Letters section today claims that by converting livestock manure to biogas, the United States could reduce its greenhouse gas emissions and generate up to 108.8 billion kW h – 2.9% of the country’s total electricity requirement. The bovine contribution to climate change is no secret, and the concept of harnessing their, er, emissions to provide power is not new. However, the journal paper, titled “Cow Power: The Energy and Emissions Benefits of Converting Manure to Biogas”, is the first study to examine in detail what the energy and environmental consequences would be. The EPA and EIA estimate that between 57.1 and 117.9 million metric tonnes of carbon dioxide equivalents were emitted annually from undigested animal manure in 2005 and 2006.

Cloudbuster & Orgone Generator: How to disperse Chemtrails HHG Construction If you want to clear out the unpleasant entities from your immediate environment, expel parasitic/predatory ET’s from your auric field, neutralize the energetic effects of chemtrails, etc., just make one or more of these and put it on the ground or in your house, according to your intuitive promptings. My partner, Carol, and I have found ! them very effective for minimizing the deadly orgone fields around nuke plants, even the ones built on natural vortices (sick puppies did that intentionally). There are plenty of people who are nice, but these aren’t generally smart. You might think I’m digressing, but the Y factor is very important when working with orgone. Most people will be content to have a HHG in the home to keep the energy clean and healthy there. If you can dowse with a pendulum or rods, etc., that may be the best way to find the right spot to put a HHG. If your house is built on one of these leyline junctions, though, lucky you! Orgone is omnipresent.

Plasma Gasification Plant Benefits For Municipal Waste Management | Global Climate Issues Plasma Gasification Plant Benefits For Municipal Waste Management Plasma Gasification Plant (PGP) projects are being developed by at least five gas plasma technology companies, and there are real benefits to be obtained from this technology for the destruction of Municipal Solid Waste (MSW). There is some debate still whether the process has been demonstrated to be a vaible technology which can be reliably operated by our waste management companies at reasonable cost and in compliance with all emissions regulations. However, the consensus seems to be largely in acceptance now that the technology is largely proven and inherently cleaner than incineration. Although, gasification is used as a power generating technology, and gas plasma plants do provide a power feed-in to the local power grid, it should be realised by all that the purpose of selecting plasma gasification is currently that of achieving maximum waste mass destruction.

How to Make "Chembusters" (CB's) From Don Croft & Ken Adachi's "Goodbye Chemtrails, Hello Blue Skies!" on Educate-Yourself.org. History of the Cloudbuster The Wilhelm Reich Cloudbuster was well known for its ability to create rain. But a problem existed with its continued use, in that the deadly orgone energy that it absorbed could in fact hurt the operator if it was not correctly "drained off". The Cloudbuster Re-Invented By utilizing the research of Wilhelm Reich, we have created a cheap, portable and easy-to-build device that consistently destroys Chemtrails and heals the atmosphere. Join The Battle - Now! It is human nature to sit on the sidelines and think that one person cannot change the things that are happening to our country. A properly constructed CB unit should be able to greatly reduce the effects of chemtrails for about 45 miles in all directions (90 mile diameter) from the unit. With this device a mere few hundred concerned citizens can SHUT DOWN the multi-billion dollar chemtrail program. Dr.

Plastic2Oil Converts Waste Plastic to Fuel – CleanTechnica: Cleantech innovation news and views Biofuels Published on July 5th, 2011 | by Glenn Meyers A Canadian waste plastic-to-fuel company, John Bordynuik, Inc. (JBI), has developed a process that uses those plastics as a feedstock, and turns them into fuel. Under the moniker, Plastic2Oil, this alternative fuel company is branding itself as the domestic alternative fuel company that first developed and scaled an original processor that converts difficult-to-recycle waste plastics into separated, refined fuels. JBI reports it has successfully overcome traditional barriers in this field, including: The acceptance of unwashed, mixed waste plasticsRemoval of residue without processor shut downRefining of fuel without a high-cost distillation towerEquipment that is not susceptible to pinhole leaksEmissions are less than a natural gas furnace, while the process releases over 14 percent oxygen into the air Source: JBI In 2009 JBI began developing its Plastic2Oil technology with a laboratory desktop unit. PHOTO: Lexsample & JBI

How Landfills Work" The basic parts of a landfill, as shown in Figure 3, are: Bottom liner system - separates trash and subsequent leachate from groundwaterCells (old and new) - where the trash is stored within the landfillStorm water drainage system - collects rain water that falls on the landfillLeachate collection system - collects water that has percolated through the landfill itself and contains contaminating substances (leachate)Methane collection system - collects methane gas that is formed during the breakdown of trashCovering or cap - seals off the top of the landfill Each of these parts is designed to address specific problems that are encountered in a landfill. Bottom Liner System A landfill's major purpose and one of its biggest challenges is to contain the trash so that the trash doesn't cause problems in the environment. Cells (Old and New) Perhaps, the most precious commodity and overriding problem in a landfill is air space. Storm Water Drainage Exclude liquids from the solid waste.

German Student Creates Electromagnetic Harvester That Gathers Free Electricity From Thin Air ~ Why Don't You Try This? A German student has built an electromagnetic harvester that recharges an AA battery by soaking up ambient, environmental radiation. These harvesters can gather free electricity from just about anything, including overhead power lines, coffee machines, refrigerators, or even the emissions from your WiFi router or smartphone. This might sound a bit like hocus-pocus pseudoscience, but the underlying science is actually surprisingly sound. We are, after all, just talking about wireless power transfer — just like the smartphones that are starting to ship with wireless charging tech, and the accompanying charging pads. Dennis Siegel, of the University of Arts Bremen, does away with the charging pad, but the underlying tech is fundamentally the same. In essence, every electrical device gives off electromagnetic radiation — and if that radiation passes across a coil of wire, an electrical current is produced. As a concept, though, Siegel’s electromagnetic harvester is very interesting. Related:

braska's Biomass Energy Generation In 2009, the companies listed below reported that more than 70 million kilowatthours of electricity were generated by biomass energy in Nebraska, an increase of 4 percent from the 2008 generation of 68,461,115 kilowatthours (see graph and table below). Timberline Energy has constructed and is operating a methane recovery and processing solution that processes methane recovered from the Butler County landfill into clean energy that is used in the boilers of Henningsen Foods. This is an example of a direct use solution. The clean methane provides a renewable and sustainable fuel source, displacing natural gas to fire steam boilers. Only a portion of the natural gas used by Henningsen Foods is displaced by the landfill methane. The Butler County project went commercial in July of 2008. OLean Energy, owned and operated by Danny and Josie Kluthe, began generating electricity from methane in September, 2005. For more information, see Operational Electric Generating Units .

Nikola Tesla The Secret Movie - Unlimited Free Energy Forever Encyclopedia Britannica lists Nikola Tesla as one of the top ten most fascinating people in history. Nikola Tesla was an electrical engineer who changed the world with the invention of the AC (alternating current) induction motor, making the universal transmission and distribution of electricity possible. So why is he virtually unknown to the general public? Today we pay for electricity as Tesla's free energy devices were destroyed by J.P. Morgan for not being able to earn profit from it. “Electric power is everywhere present in unlimited quantities and can drive the world's machinery without the need of coal, oil, gas, or any other of the common fuels.” “My brain is only a receiver. The Missing Secrets Of Nikola Tesla “Ere many generations pass, our machinery will be driven by a power obtainable at any point of the universe. “Alpha waves in the human brain are between 6 and 8 hertz. Related Posts

A budget solution in the trash? A proposed tax on dinner and a movie in Omaha is about as popular as the latest Paris Hilton flick. Or, for that matter, a hike in property taxes. How about a garbage fee? That's one question being bandied about as the City of Omaha looks for ways to handle its financial woes without closing swimming pools, raising property taxes or levying a tax on dinners, concerts and other forms of entertainment. Unfortunately — or fortunately, depending on your point of view — a residential garbage fee is not an option for addressing the city's 2010 budget crisis. That's because a state law prohibits Omaha — alone among cities in Nebraska — from imposing the fee. But a garbage fee is an option down the road, as the city looks for new ways to fund services and, in the process, reduce the burden on property taxes and the city's general operating fund, said Ron Gerard, spokesman for Mayor Jim Suttle. “It gets to the whole concept that Mayor Suttle believes: There should be a fee for services. State Sen.