The Mohawks Who Built Manhattan (Photos) 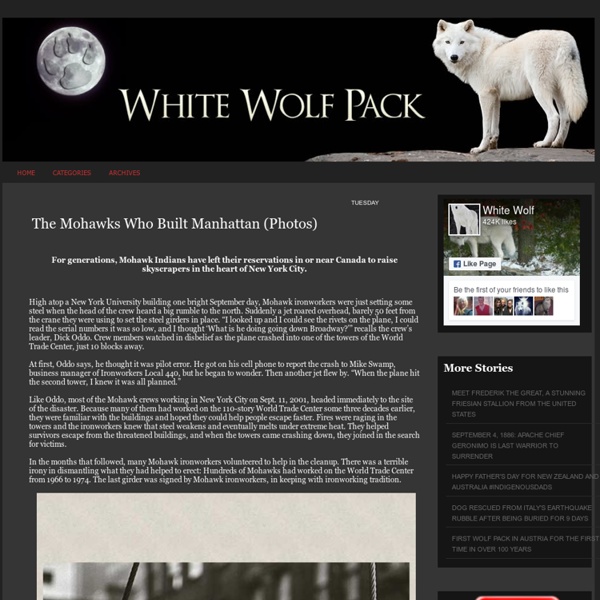 For generations, Mohawk Indians have left their reservations in or near Canada to raise skyscrapers in the heart of New York City. High atop a New York University building one bright September day, Mohawk ironworkers were just setting some steel when the head of the crew heard a big rumble to the north. Suddenly a jet roared overhead, barely 50 feet from the crane they were using to set the steel girders in place. “I looked up and I could see the rivets on the plane, I could read the serial numbers it was so low, and I thought ‘What is he doing going down Broadway?’” recalls the crew’s leader, Dick Oddo. Crew members watched in disbelief as the plane crashed into one of the towers of the World Trade Center, just 10 blocks away. At first, Oddo says, he thought it was pilot error. Like Oddo, most of the Mohawk crews working in New York City on Sept. 11, 2001, headed immediately to the site of the disaster. Walking the iron Mohawks have been building skyscrapers for six generations.

How Native American tribes are bringing back the bison from brink of extinction On 5,000 hectares of unploughed prairie in north-eastern Montana, hundreds of wild bison roam once again. But this herd is not in a national park or a protected sanctuary – they are on tribal lands. Belonging to the Assiniboine and Sioux tribes of Fort Peck Reservation, the 340 bison is the largest conservation herd in the ongoing bison restoration efforts by North America’s Indigenous people. Behind the Scenes: Tank Man of Tiananmen Update | 12:05 p.m., Thursday, June 4. In response to this post, a fifth photographer, Terril Jones, has shared with Lens his picture of the impending confrontation, from street level. It has never before been published.

Tribal Fishing Rights Activist Billy Frank Jr. Statue to Be Placed in U.S. Capitol OLYMPIA, Wash. — When longtime tribal treaty rights warrior Billy Frank, Jr. died unexpectedly on May 6, 2014 at the age of 83, S’Klallman Tribal Chairman W. Ron Allen said, “He was bigger than life. It’s a very sad day for all of us.” Billy Frank Jr. Back then, Allen had no way of foreseeing that one day a statue of Billy Frank Jr. would loom larger than life in the U.S. Capitol. The History of Europe from 400 BC to the Present, Animated in 12 Minutes What does the future of Europe look like? Geopolitical times such as these do make one ponder such questions as, say, "In what shape (if any) will the European Union make it through this century?" But as any historian of Europe knows, that continent has seldom had an easy time of it: European history is a history of conquests, rebellions, alliances made and broken, and of course, wars aplenty — a major piece of the rationale behind the creation of organizations like the European Union in the first place. As a result, the division of Europe by the many groups and individuals who have laid claim to pieces of it has, over the past 2500 years, seldom held steady for long, as you can see on the animated map above. The Roman Empire did manage to paint the map red, literally, in the second and third centuries, but during all eras before and after it looks as multicolored as it was politically disunited.

Native cartography: a bold mapmaking project that challenges Western notions of place ‘More lands have been lost to Native peoples probably through mapping than through physical conflict.’ Maps have been used not only to encroach on Native Americans lands, but to diminish their cultures as well. With every Spanish, French or English placename that eclipses a Native one, a European narrative of place and space becomes further entrenched. In an effort to help reclaim his region for his people, Jim Enote, a Zuni farmer and the director of the {*style:<a href=' A:wan Museum and Heritage Center{*style:</a>*} in New Mexico, has organised a unique project intended to help bring indigenous narratives back to the land. Partnering with Zuni artists, Enote is working to create maps that evoke the Zuni’s sense of place, which prioritises storytelling and shared knowledge over plots and boundaries. Enote also hopes the project will spark conversations about Zuni culture and ancestry, creating a renewed sense of continuity of identity in his community.

Hubble's Famous M31 VAR! plate On the night of October 5-6, 1923, Carnegie astronomer Edwin P. Hubble took a plate of the Andromeda Galaxy (Messier 31) with the Hooker 100-inch telescope of the Mount Wilson Observatory. This plate, with identification number H335H ("Hooker plate 335 by Hubble"), is famous for having led to his discovery of the first Cepheid variable star in M31, which established beyond any doubt that M31 was a separate galaxy from our own. Shown here are three images of Plate H335H as well as three images of a similar plate, H331H, which Hubble took the night before. The letters N on Plate H335H mark Novae, stars marked by Hubble as new when compared with earlier plates. Canada’s Supreme Court says Native American Richard Desautel has right to hunt in Canada The ruling in the case of Richard Desautel, a U.S. citizen and member of the Lakes tribe of the Colville Confederated Tribes in Washington state, ended a legal battle that began in 2010 when he shot a cow elk in the Arrow Lakes region of British Columbia. Story continues below advertisement He alerted a conservation officer and was charged with hunting without a license and hunting big game while not a resident of British Columbia.

The Man Who Documented Native American Cultures Edward Sheriff Curtis The Man Who Documented Native American Cultures by Chris Nelson Scientists reveal 10,000-year-old mummy is Native American ancestor Scientists attempting to map out the historical migrations of North and South America by analysing ancient bones have revealed that a 10,000-year-old skeleton unearthed in a cave in Nevada is the ancestor of a Native American tribe. The iconic skeleton, known as the “Spirit Cave mummy”, was reburied this summer by the Fallon Paiute-Shoshone people in Nevada, bringing closure to a decades-long legal dispute with anthropologists who fought for it to remain on display in a museum. DNA painstakingly extracted from the ancient skull proved the skeleton was an ancestor of the tribe and discredited a longstanding theory that the individual was from a group of “Paleoamericans” that existed in North America before Native Americans. The full genetic details of the skeleton, which is the world’s oldest natural mummy, are published as part of a wide-ranging international study of the ancestry of North and South America. … we have a small favour to ask.

Growing Up Surrounded by Books Has a Lasting Positive Effect on the Brain, Says a New Scientific Study Image by George Redgrave, via Flickr Commons Somewhere in the annals of the internet--if this sprawling, near-sentient thing we call the internet actually has annals--there is a fine, fine quote by filmmaker John Waters: We need to make books cool again. If you go home with somebody and they don’t have books, don’t fuck them. The Blue Marble The Blue Marble is an image of planet Earth taken on December 7, 1972, by the crew of the Apollo 17 spacecraft at a distance of about 29,000 kilometers (18,000 miles) from the surface.[1][2][3] It is one of the most reproduced images in history.[4][5] The image has the official NASA designation AS17-148-22727[6] and shows the Earth from the point of view of the Apollo crew travelling towards the Moon. The translunar coast photograph extends from the Mediterranean Sea to Antarctica. This was the first time the Apollo trajectory made it possible to photograph the south polar ice cap, despite the Southern Hemisphere being heavily covered in clouds. In addition to the Arabian Peninsula and Madagascar, almost the entire coastline of Africa is clearly visible. The Asian mainland is on the horizon.