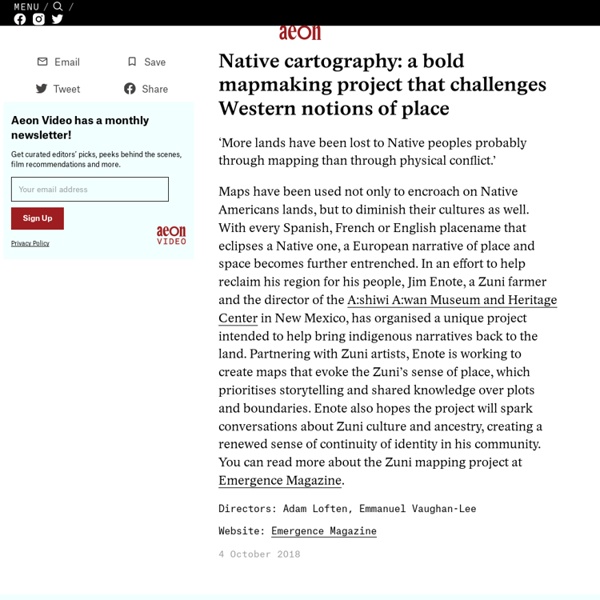 ‘More lands have been lost to Native peoples probably through mapping than through physical conflict.’ Maps have been used not only to encroach on Native Americans lands, but to diminish their cultures as well. With every Spanish, French or English placename that eclipses a Native one, a European narrative of place and space becomes further entrenched. In an effort to help reclaim his region for his people, Jim Enote, a Zuni farmer and the director of the {*style:<a href=' A:wan Museum and Heritage Center{*style:</a>*} in New Mexico, has organised a unique project intended to help bring indigenous narratives back to the land. Partnering with Zuni artists, Enote is working to create maps that evoke the Zuni’s sense of place, which prioritises storytelling and shared knowledge over plots and boundaries. Enote also hopes the project will spark conversations about Zuni culture and ancestry, creating a renewed sense of continuity of identity in his community.

Cowboy cartographer - pictorial maps Calif. Joseph Jacinto Mora knew all the dogs in Carmel-By-The-Sea, California. He knew Bess, a friendly brown mutt who hung out at the livery stables. He knew Bobby Durham, a pointy-eared rascal who, as Mora put it, “had a charge [account] and did his own shopping at the butcher’s.” He knew Captain Grizzly, an Irish terrier who went to town with his muzzle on and invariably came back carrying it, having charmed a kind stranger into taking it off. Scientists reveal 10,000-year-old mummy is Native American ancestor Scientists attempting to map out the historical migrations of North and South America by analysing ancient bones have revealed that a 10,000-year-old skeleton unearthed in a cave in Nevada is the ancestor of a Native American tribe. The iconic skeleton, known as the “Spirit Cave mummy”, was reburied this summer by the Fallon Paiute-Shoshone people in Nevada, bringing closure to a decades-long legal dispute with anthropologists who fought for it to remain on display in a museum. DNA painstakingly extracted from the ancient skull proved the skeleton was an ancestor of the tribe and discredited a longstanding theory that the individual was from a group of “Paleoamericans” that existed in North America before Native Americans. The full genetic details of the skeleton, which is the world’s oldest natural mummy, are published as part of a wide-ranging international study of the ancestry of North and South America.

Religion and refugees are deeply entwined in the US Robert Bowers lashed out at what he believed to be a Jewish plot to bring more refugees and asylum seekers to the U.S. before allegedly murdering 11 people at the Tree of Life synagogue in Pittsburgh. Bowers’s claim that HIAS, a prominent Jewish humanitarian organization, was bringing migrants from Honduras, El Salvador and Guatemala northward to commit violence was false. But it is true that many religious communities in the U.S., including American Jews, have long supported refugees and asylum-seeking migrants who arrive in the U.S.

Buddhism: 11 Common Misunderstandings and Mistakes People believe many things about Buddhism that simply are incorrect. They think Buddhists want to get enlightened so they can be blissed out all the time. If something bad happens to you, it's because of something you did in a past life. Everybody knows that Buddhists have to be vegetarians. Unfortunately, much of what "everybody knows" about Buddhism isn't true. Explore these common but mistaken ideas many people in the West have about Buddhism.

Coca-Cola influences China’s obesity policy, BMJ report says The Coca-Cola Company has shaped China’s policies towards its growing obesity crisis, encouraging a focus on exercise rather than diet and thereby safeguarding its drinks sales, an academic investigation has alleged. Susan Greenhalgh, a Harvard academic and China scholar, says Coca-Cola has exerted its influence since 1999 through a Chinese offshoot of an institute founded in the US by the then Coca-Cola vice-president Alex Malaspina with substantial company funding. The International Life Sciences Institute (ILSI) has been heavily criticised in the US and Europe for promoting exercise and downplaying the need for people to cut down on excessive sugary drinks. China has a serious and growing obesity problem: 42.3% of Chinese adults were overweight or obese in 2011, up from 20.5% in 1991. Its 1.4 billion people constitute Coca-Cola’s third-largest market by volume. ILSI-China, says Greenhalgh, has influence in government circles.

Here’s How America Uses Its Land Using surveys, satellite images and categorizations from various government agencies, the U.S. Department of Agriculture divides the U.S. into six major types of land. The data can’t be pinpointed to a city block—each square on the map represents 250,000 acres of land. Two Spirits, One Heart, Five Genders Those who arrived in the Native American Garden of Eden had never seen a land so uncorrupted. The Europeans saw new geography, new plants, new animals, but the most perplexing curiosity to these people were the Original Peoples and our ways of life. Of all of the foreign life ways Indians held, one of the first the Europeans targeted for elimination was the Two Spirit tradition among Native American cultures.

Ants Among Elephants by Sujatha Gidla review – life as an ‘untouchable’ in modern India Not long ago, at a conference that brought together academics, writers and artists in Kochi in south India, the historian Vivek Dhareshwar unsettled his audience by saying that there was no such thing as caste – that it was a conceptual category the British used to understand and reduce India, which was internalised almost at once by Indians. “Caste” was not a translation of “jaati”, said Dhareshwar; “jaati” was a translation of “caste” – that is, the internalisation by Indians of the assumptions that the word caste involve meant they took its timelessness and authenticity for granted. Dhareshwar seemed to be implying – forcefully and outlandishly – that caste was at once a colonial inheritance and a habit of thinking, whose provenance no one felt the need to inquire into any longer. This was deeply nervous-making. There was one sense, though, in which Dhareshwar’s talk was necessary.

The Man Who Documented Native American Cultures Edward Sheriff Curtis The Man Who Documented Native American Cultures by Chris Nelson Born on a Wisconsin farm in 1868, Edward Sheriff Curtis became fascinated with photography early on, building his own camera at the age 10. As a teenager his family relocated to Seattle, where he photographed Princess Angeline (aka Kickisomlo), the daughter of the Duwamish chief Seattle, after whom the city is named. Curtis recognized his life's calling as a documentarian of Native American cultures and quickly joined expeditions to Montana and Alaska to do just that. Amazing Planet ‹ Previous PhotoNext Photo › Strokkur Geyser, Iceland Send as postcard | Request for quotes ‹ Prev1…1617181920…40Next ›

Three reasons to think twice about mapping the brain The brain has a geography that matters. The cerebral cortex (the grey outer layer of the brain) is folded into our skulls in such a way as to reduce the wiring length of our neurons and improve cognitive function. Needless to say, this folding is incredibly complex. In order to examine and make sense of this structure, neuroscientists are increasingly turning to maps to represent its complexity. Much like the towns, cities, countries and continents represented on a typical geographic map, areas of the brain are similarly being spatially defined, labelled and understood through a process of mapping. El Norte review: an epic and timely history of Hispanic North America The subtitle of Carrie Gibson’s book is The Epic and Forgotten Story of Hispanic North America. El Norte lives up to it. These 437 pages are an important correction to centuries of American history which have mostly neglected the vital role of Spanish pioneers (and Native Americans) in favor of settlers from England, Ireland and Scotland.