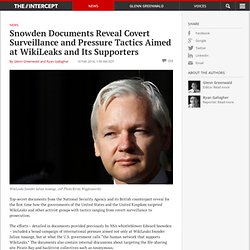 (AP Photo/Kirsty Wigglesworth) Top-secret documents from the National Security Agency and its British counterpart reveal for the first time how the governments of the United States and the United Kingdom targeted WikiLeaks and other activist groups with tactics ranging from covert surveillance to prosecution. The efforts – detailed in documents provided previously by NSA whistleblower Edward Snowden – included a broad campaign of international pressure aimed not only at WikiLeaks founder Julian Assange, but at what the U.S. government calls “the human network that supports WikiLeaks.”

GCHQ Spies on WikiLeaks Visitors. NSA, GHCQ targeted WikiLeaks network. Nationwide - Guilt by association? Here's why were. Chicago Police “Heat List” Renews Old Fears About Government Flagging and Tagging. The Verge had a story last week (expanding on an August report from the Chicago Tribune that I’d missed) that the Chicago police have created a list of the “400 most dangerous people in Chicago.” 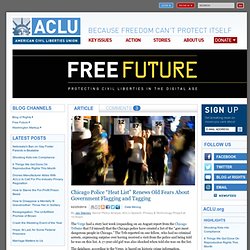 The Trib reported on one fellow, who had no criminal arrests, expressing surprise over having received a visit from the police and being told he was on this list. A 17-year-old girl was also shocked when told she was on the list. The database, according to the Verge, is based on historic crime information, disturbance calls, and suspicious person reports. Filmmaker Joe Tropea talks about the... - The Real News Network. A Look at the FBI Infiltration of the Anti-Vietnam War Movement (2/2) DN! Exclusive: Inside the Army Spy Ring & Attempted Entrapment of Peace Activists, Iraq Vets, Anarchists.

AMY GOODMAN: More details have come to light showing the U.S. military infiltrated and spied on a community of antiwar activists in the state of Washington and beyond. 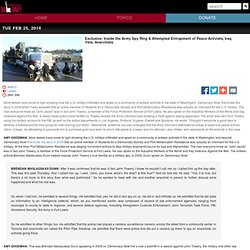 Democracy Now! First broke the story in 2009 that an active member of Students for a Democratic Society and Port Militarization Resistance was actually an informant for the U.S. military. At the time, Port Militarization Resistance was staging nonviolent actions to stop military shipments bound for Iraq and Afghanistan. The man everyone knew as "John Jacob" was in fact John Towery, a member of the Force Protection Service at Fort Lewis. House Un-American Activities Committee. While newsmen take notes, Chairman Dies of House Committee Investigating Un-American Activities reads & proofs his statement replying to Pres. 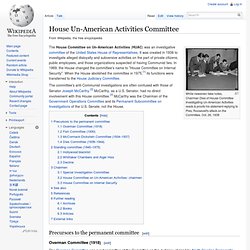 Roosevelt's attack on the Committee, Oct. 26, 1938 The House Committee on Un-American Activities (HUAC) was an investigative committee of the United States House of Representatives. It was created in 1938 to investigate alleged disloyalty and subversive activities on the part of private citizens, public employees, and those organizations suspected of having Communist ties. In 1969, the House changed the committee's name to "House Committee on Internal Security". When the House abolished the committee in 1975,[1] its functions were transferred to the House Judiciary Committee. The committee's anti-Communist investigations are often confused with those of Senator Joseph McCarthy.[2] McCarthy, as a U.S. Pete Seeger Songs. Testimony of Pete Seeger before the House Un-American Activities Committee, August 18, 1955. 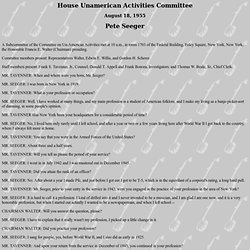 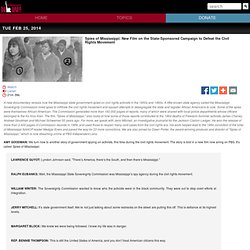 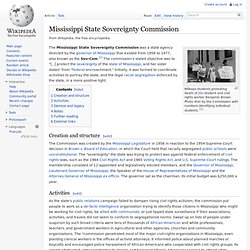 Photo shot by the Commission with numbers identifying individual students. [1] The Mississippi State Sovereignty Commission was a state agency directed by the governor of Mississippi that existed from 1956 to 1977, also known as the Sov-Com.[2] The commission's stated objective was to "[...] protect the sovereignty of the state of Mississippi, and her sister states" from "federal encroachment.

" Initially, it was formed to coordinate activities to portray the state, and the legal racial segregation enforced by the state, in a more positive light. Creation and structure[edit] Black Civil Rights Leader Was Mississippi's Prolific `Agent X' June 07, 1998|By Dahleen Glanton, Tribune Staff Writer. 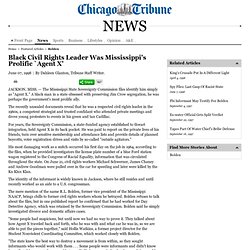 JACKSON, MISS. — The Mississippi State Sovereignty Commission files identify him simply as "Agent X. " A black man in a state obsessed with preserving Jim Crow segregation, he was perhaps the government's most prolific ally. The recently unsealed documents reveal that he was a respected civil rights leader in the 1960s, a competent strategist and trusted confidant who attended private meetings and drove young protesters to events in his green and tan Cadillac.

For years, the Sovereignty Commission, a state-funded agency established to thwart integration, held Agent X in its back pocket. He was paid to report on the private lives of his friends, turn over sensitive membership and attendance lists and provide details of planned boycotts, voter registration drives and visits by so-called "outside agitators. " The mere mention of the name R.L.

"Some people had suspicions, but until now we had no way to prove it. The History of Surveillance and the Black Community. Martin Luther King and Malcolm X waiting for press conference, March 26, 1964. 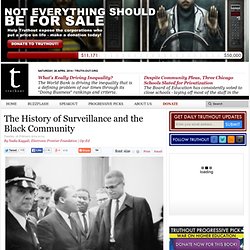 (Photo: Library of Congress via Wikimedia Commons) Why we need privacy. Not All "Serve and protect you" Entrapment. Cointelpro (fbi history) COINTELPRO. The Palmer Raids. House Un-American Activities Committee.