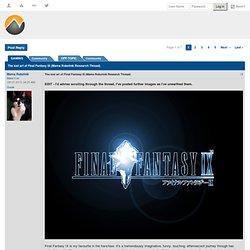 Final Fantasy IX is my favourite in the franchise. It’s a tremendously imaginative, funny, touching, effervescent journey through two colourful worlds. It’s unpredictable, enthusiastic and allows for generous and plentiful exploration – and overflows with optional secrets and locations. It’s a fantastic experience that doesn’t take itself too seriously: Consider that you start the game as a thief with his own tail – who then meets a princess demanding to be kidnapped from her obese mother – and then you crash-land a flying boat in a forest that turns to stone – while being hunted by two evil court jesters - and things just get madder from there.

Full disclosure if you haven’t played it: some contemporary gamers struggle with the battle speed – I don’t find it to be a problem, but it’s worth keeping in mind. (CLICK FOR FULL SIZE) (CLICK FOR FULL SIZE) More thumbnailed images here: Sources: Chris Schweizer's Blog: The Schweizer Guide to Spotting Tangents. Comic art is, as a general rule, a line-based medium. 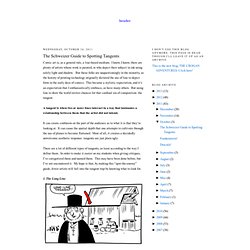 I know, I know, there are plenty of artists whose work is painted, or who depict their subject in ink using solely light and shadow. But these folks are unquestioningly in the minority, as the history of printing technology originally dictated the use of line to depict form in the early days of comics. This became a stylistic expectation, and it’s an expectation that I enthusiastically embrace, as have many others. But using line to draw the world invites chances for that cardinal sin of composition: the tangent. A tangent is when two or more lines interact in a way that insinuates a relationship between them that the artist did not intend.

It can create confusion on the part of the audience as to what it is that they’re looking at. There are a lot of different types of tangents, as least according to the way I define them. 2. The parallel tangent is when the containing lines of two objects run alongside each other. 3. 4. 5. 6. Design: straight vs. curves. Body language.

Communication through body language has been going on for over a million years but has only been scientifically studied to any extent in the last twenty years or so; it became popular during the 1970s. 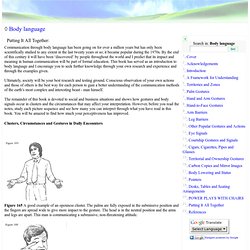 By the end of this century it will have been ‘discovered’ by people throughout the world and I predict that its impact and meaning in human communication will be part of formal education. This book has served as an introduction to body language and I encourage you to seek further knowledge through your own research and experience and through the examples given. Ultimately, society will be your best research and testing ground. Conscious observation of your own actions and those of others is the best way for each person to gain a better understanding of the communication methods of the earth’s most complex and interesting beast - man himself. Clusters, Circumstances and Gestures in Daily Encounters Figure 165 A good example of an openness cluster.

Allan Pease. Composition. Many months back I started and neeeeearly finished this piece, for fun, between work. 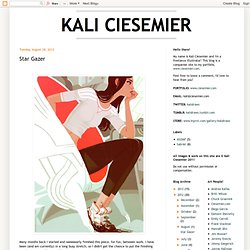 I have been (and am currently) in a long busy stretch, so I didn't get the chance to put the finishing touches on it until last week! This all started as a composition exercise. I was reading the wonderful Creative Illustration by Andrew Loomis (out of print, but free pdfs available online) and he has a great section about informal subdivision as a compositional tool. Informal subdivision is a process Loomis created, where you divide your image space unequally (and somewhat randomly!) By drawing a series of horizontal, vertical, and diagonal lines. Once you create this dynamic linear plan for your image, you let it suggest your composition for whatever subject you have in mind.

I didn't have a particular subject in mind, I just wanted to draw a lady. Here's the final lined up with my informal subdivision. Composition 2. Composition 3.