Convolutional Neural Network Workbench. Download CNNWB Sources Download Setup Introduction This article is about a framework in C# 4.0 that allows to create, train, and test convolutional neural networks against the MNIST and the CIFAR-10 dataset of 10 different natural objects. 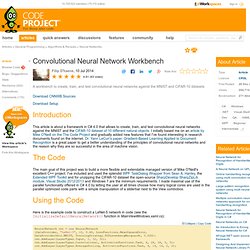 I initially based me on an article by Mike O'Neill on the The Code Project and gradually added new features that I've found interesting in research documents found on the internet. Dr. The Code The main goal of this project was to build a more flexible and extendable managed version of Mike O'Neill's excellent C++ project. Haar-feature Object Detection in C# Contents Introduction In 2001, Viola and Jones proposed the first real-time object detection framework. 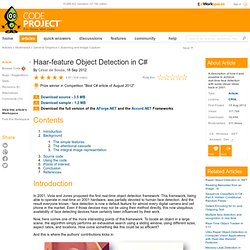 This framework, being able to operate in real-time on 2001 hardware, was partially devoted to human face detection. And the result everyone knows - face detection is now a default feature for almost every digital camera and cell phone in the market. Even if those devices may not be using their method directly, this now ubiquitous availability of face detecting devices have certainly been influenced by their work. Discrete Haar Wavelet Transformation. Background Haar wavelet - Wikipedia Discrete wavelet transform - Wikipedia The first DWT was invented by the Hungarian mathematician Alfréd Haar. 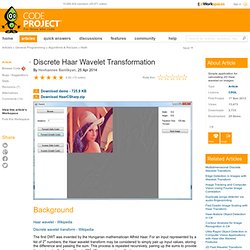 For an input represented by a list of 2n numbers, the Haar wavelet transform may be considered to simply pair up input values, storing the difference and passing the sum. This process is repeated recursively, pairing up the sums to provide the next scale: finally resulting in 2n-1 differences and one final sum. Near-Duplicate Image Detection. Img(Rummager) « Savvas A. Chatzichristofis, dipl. Eng., Ph.D. Img(Rummager) brings into effect a number of new as well as state of the art descriptors. 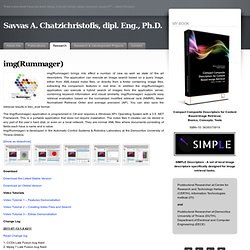 The application can execute an image search based on a query image, either from XML-based index ﬁles, or directly from a folder containing image ﬁles, extracting the comparison features in real time. In addition the img(Rummager) application can execute a hybrid search of images from the application server, combining keyword information and visual similarity. img(Rummager) supports easy retrieval evaluation based on the normalized modiﬁed retrieval rank (NMRR), Mean Normalized Retrieval Order and average precision (AP). You can also save the retrieval results in trec_eval format. 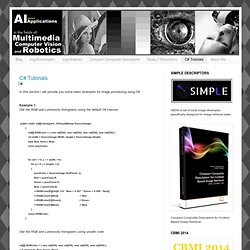 Then plot the histograms in a ZedGraphControl Control. Example 3: Eprints.qut.edu.au/34388/1/c34388a.pdf. Home of pHash, the open source perceptual hash library. Fixed Length MH Image Hash We have developed a new image hash based on the Marr wavelet that computes a perceptual hash based on edge information with particular emphasis on corners. 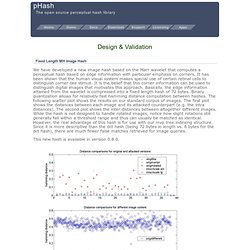 It has been shown that the human visual system makes special use of certain retinal cells to distinguish corner-like stimuli. It is the belief that this corner information can be used to distinguish digital images that motivates this approach. Basically, the edge information attained from the wavelet is compressed into a fixed length hash of 72 bytes. pHash.org: Home of pHash, the open source perceptual hash library. Database - C# Image processing: Image similarity. SURF. SURF (Speeded Up Robust Features) is a robust local feature detector, first presented by Herbert Bay et al. in 2006, that can be used in computer vision tasks like object recognition or 3D reconstruction . 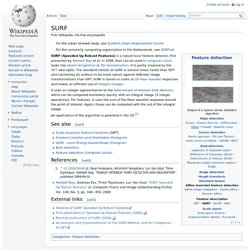 It is partly inspired by the SIFT descriptor. The standard version of SURF is several times faster than SIFT and claimed by its authors to be more robust against different image transformations than SIFT. SURF is based on sums of 2D Haar wavelet responses and makes an efficient use of integral images . It uses an integer approximation to the determinant of Hessian blob detector , which can be computed extremely quickly with an integral image (3 integer operations). For features, it uses the sum of the Haar wavelet response around the point of interest.

An application of the algorithm is patented in the US. [ 1 ] See also [ edit ] References [ edit ] External links [ edit ] Image Retrieval. The aim of this post is to talk about: 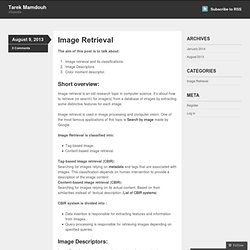 Image Retrieval: Color Coherence Vector. Intorduction It's recommended to have a look at this precise post. 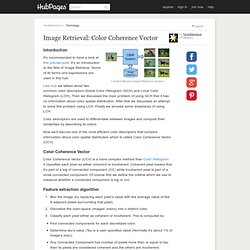 It's an introduction to the field of Image Retrieval. Some of its terms and expressions are used in this hub. Last hub we talked about two common color descriptors Global Color Histogram (GCH) and Local Color Histogram (LCH). Then we discussed the main problem of using GCH that it has no information about color spatial distribution. Similar images finder - .NET Image processing in C# and RGB projections - Source Code. OpenSURF - The Official Home of the Image Processing Library. The task of finding point correspondences between two images of the same scene or object is an integral part of many machine vision or computer vision systems. 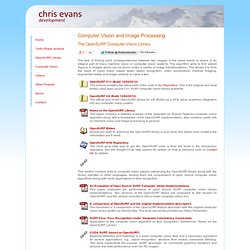 The algorithm aims to find salient regions in images which can be found under a variety of image transformations. This allows it to form the basis of many vision based tasks; object recognition, video surveillance, medical imaging, augmented reality and image retrieval to name a few. OpenSURF C# (Build 12/04/2012)The official port of the OpenSURF library for C#. Builds as a dll to allow seamless integration into any computer vision system. Notes on the OpenSURF LibraryThis paper contains a detailed analysis of the Speeded Up Robust Features computer vision algorithm along with a breakdown of the OpenSURF implementation. OpenSURF BibtexShould you wish to reference the OpenSURF library in your work, this bibtex entry contains the information you'll need.

Please also link to this page if you have found OpenSURF useful! C# - Are there any 'ok' Image Recognition libraries for .NET.