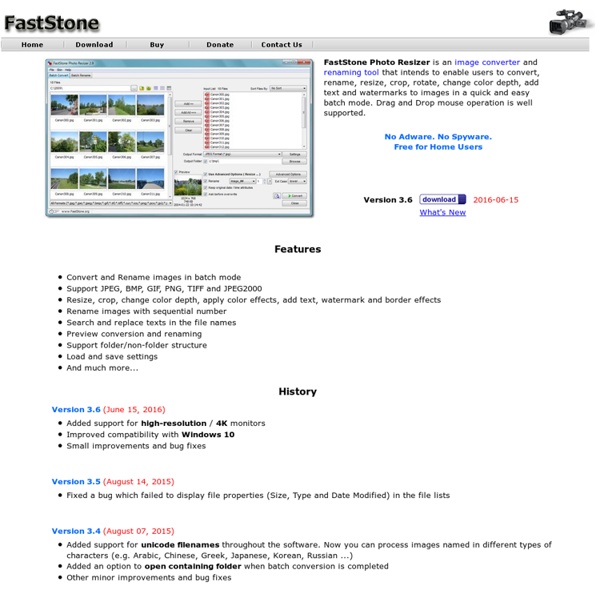 Scene Completion Using Millions of Photographs People Abstract What can you do with a million images? In this paper we present a new image completion algorithm powered by a huge database of photographs gathered from the Web. The algorithm patches up holes in images by finding similar image regions in the database that are not only seamless but also semantically valid. Our chief insight is that while the space of images is effectively infinite, the space of semantically differentiable scenes is actually not that large. Paper SIGGRAPH paper. Communications of the ACM paper. Presentation .zip file (ppt + movies), 90MB Citation James Hays, Alexei A. Data Test set, 44MB containing 51 image/mask pairs used for our user study. Image Downloading Code Code for downloading Flickr images. Implementations I'm aware of two class projects which implemented Scene Completion with smaller data sets. Funding This research is supported in part by: NSF Graduate Research Fellowship to James Hays.

5 Techniques for Enhancing Contrast in Digital Photos A Post By: Darren Rowse This post on enhancing contrast in digital photos was submitted by Leeroy Gribbon whose photoblog (www.decoy.co.nz) we recently featured here at DPS as Photoblog of the Week. I’m a sucker for good contrast in a photo. Since I mainly like to dabble in monochrome work, contrast for me is the gravy train – second only to composition. Regardless of whether you take black and white photographs or colour ones, take them of your cat or of war zones, I feel a little bit of contrast goes a long way to making a photo come alive. So, let’s investigate together just what contrast is, and how we can bring it out in our work. Get more tips like this by subscribing to Digital Photography School What is Contrast? Contrast is simply the amount of difference between tones in an image. It is not the aim of this article to help you with this subjective part of the process. Before we begin, a caveat: First Things First 1. Masks: 2. 1.

Liquid Rescale GIMP plugin: Examples A video of a simple rescaling example, made with the previous version 0.4 of the plugin: Simple examples Here you can find some simple examples of what can be obtained using the LqR plugin. Click on the pictures to see the full-size versions. Enlargement example Original Enlarged The second image was obtained by setting “140%” in the “Width” field. Element removal example Spot the differences The second image was obtained by successively removing image elements (by shrinking with discard masks), and then by liquid-rescaling back to the original size. Content enhancement example Enhanced The second image was obtained by shrinking the image with LqR in a uniform way, but using protective masks for the girl (♥) and for the Alhambra palace in background, then using standard scale to go back to the original size. Flickr group There's a collection of pictures on Flickr made using the LqR plugin; you can see a slide-show below.

Free Online Photo Editors Perhaps you’re on vacation and didn’t feel like lugging your laptop along with you. But of course you’re taking pictures. You can now clean up those photos and even do more advanced image editing from any internet café. A crop of web-based photo editing programs has sprouted up over the past year, mostly based on AJAX or Flash. The web applications we consider here range from simple photo toucher-uppers all the way up to Photoshop wannabes. FauxtoPicnikPicture2LifePixenateSnipshot In addition to letting you do things like resizing, rotating, and optimizing brightness, contrast, and colors, many of these will actually apply filters (blur, sharpen, etc.) and other weird fun effects, such as giving your image an old-fashioned border or making collages. They’re all free, and mostly in beta at this stage, but we didn’t encounter any showstoppers—just the odd function not, er, functioning. Join us as we explore the new world of free online image editing.

It&#039;s behind you: Great White stalks ocean canoeist | the Da By This Is Money Updated: 14:56 GMT, 22 March 2006 DEAR Chancellor, I am the owner of a small business, making car air fresheners in Croydon. We employ 23 people and I implore you not to add any further regulations to our wages bill in the forthcoming budget. You and the Prime Minister have always sung the praises of SME's but the continuing regulations are strangling the life out of our 46 year-old company. In 1998, Tony Blair wrote 'The burdens on business must be reduced' and a year later in Bristol he told a business audience 'Small businesses are where the growth is going to be in terms of jobs and we must constantly look at ways to improve their situation.' But that just hasn't happened. Your government created the Better Regulation Task Force to cut the burden caused by new policies like compulsory parental leave and a rise in National Insurance Contributions. Yours Sincerely, David Franklin

Turn a TI Graphing Calculator into an Intervalometer and Create I've always wanted to make time lapse videos, but I don't have a camera with an intervalometer feature built in. In fact, I don't think very many cameras come with such a feature (especially not SLR cameras). So what do you want to do if you want to make time-lapse videos? You can buy a commercial intervalometer (yeah, right). You can check out some instructables like this one and make one yourself out of electronic components. But what if you don't have the time/skills necessary to build one? Well, you can actually use a common TI graphing calculator (I don't know of any high school student without one of these) and hook it up to any camera with a remote shutter release socket.

Unshaking and refocusing your photos Deconvolution is the general process that helps remove the effects of camera shake and blur. If you want to understand the math behind the process, start with the articles referenced at Wikipedia and you can find as much detail as you want. In a nutshell, it involves taking the Fast Fourier Transform of the image (which makes it easier to see the tell-tale signs of blurring), smoothing out the artifacts, then transforming the image back into its original form. Unshake Unshake The most straightforward way to get started is with Mark Cahill's Unshake, a small Java app with a lot of options that performs some helpful guesswork to speed things up. You can unpack the distribution anywhere on your system and launch the app by running . Unshake results When the window is properly set, click on the Estimate button and Unshake will give its best guess as to how long the process will take. Unshake attempts to determine on its own how much correction to apply. Refocus Iterative Refocus No silver bullet

MAKE: Blog: Kite aerial photography gift guide (KAP) This year we’re pleased to have the first ever Kite aerial photography gift guide (KAP) on the web by Charles Benton, author of “Kite Aerial Photography Puts Your Eye in the Sky” from MAKE volume 01. Charles Benton is an inveterate tinkerer from Berkeley, Calif., where he serves as a Professor of Architecture for the University of California, Berkeley. Benton’s research in Building Science often involves the design and construction of prototype devices. If you ever wanted to take photos from high in the sky, this is the guide for you! Brooks Leffler ( is cited several times as a source for good reason. The Aerial Eye CDPrice: $30 The Complete Aerial Eye CD contains all 18 issues of the quarterly journal published by the Kite Aerial Photography Committee of AKA between Fall 1994 and Summer 1999. The disk contains PDF files of each issue as well as a directory of sources, plus Adobe Acrobat Reader and a cover picture that may be printed to use in a CD jewel case.

Alpha Transparency in PNG-8 Images Without Using Fireworks | eth Web designers are starting to discover that 8-bit PNG files can be used to achieve semi-transparency (alpha transparency) that will gracefully degrade in IE6 and be much more compact than the same image saved as a PNG-24. Most of the posts around the web focus on using Adobe Fireworks to achieve semi-transparency, but what about the rest of us that don’t use Fireworks? Today, I’ll demonstrate an alternative technique to show you how to achieve alpha transparency in PNG-8 images without Adobe Fireworks. Why Use a PNG Instead of a GIF? GIF files only support binary transparency meaning that either a pixel is either fully opaque or fully transparent. Both PNG-8 and GIF files are limited to 256-colors. Before We Continue Before we continue, you’ll need to download your free copy of pngquant and install using the instructions below. Windows Users Mac Users Download a pre-made executable. Producing and Saving the PNG Image Open up your image editing program. Step 1 Create a new document (Ctrl + N).

Review of multi-flash imaging with the non-photorealistic camera I recently visited Ramesh Raskar at the Mitsubishi Electrical Research (MERL) lab in Cambridge, MA to learn more about his multi-flash camera innovation that recently made an impressive appearance at the SIGGRAPH 2004. Raskar has been working on the multi-flash system for 3 years in collaboration with Karhan Tan, Amit Agrawal, and Rogerio Feris. If you grew up in the 80's, and watched early MTV, you might remember A-Ha's "take on me" line drawing animation video. The multi-flash camera captures real life images and renders them in a non-photorealistic line-form. what does it do? The multi-flash camera's non-photorealistic images look like line drawings, but have an advantage over hand made line drawings for they are able depict real-world scenes with precision and, most importanly, speed impossible for the human eye/hand. Additionally, the multi-flash can detect shapes that an ordinary camera would not be able to replicate. how does it work? future applications engine example more

How to make a fish eye lens for a Nikon D-90 Digital SLR for $16 I got the inspiration to do this Instructable while reading another Instructable that accomplished the same "fish-eye" effect using a PVC reduction pipe and an entry door viewer. There was concern in the prior Instructable about around scratching the lens so I wanted to solve that problem in my easy to build fish eye lens as well as make a version which is easy to use, remove, etc. I decided to modify the design by using an existing camera attachment which would easily mount to the camera and comes with most Nikon lenses. The secret to my design is to use the lens shield as the attachment platform which allows the fish eye lens to be easily attached and removed from standard lenses while enabling a hands free experience.

Schlieren Photography - Ian.Org (Note: Click any image on this page for a larger view.) I also have a Schlieren Tutorial page I have written up with tips and some explanations on how it all works. Visit Andrew Davidhazy's Schlieren Photography Principles and also Schlieren Optics from Harvard to see where I got most of my information. Both are good resources. The photos on this page are also on My Flickr Account. There are two main ways to set up a Schlieren system. I started out with a small 6" telescope mirror pictured above. You can also see my high-tech setup, with phone books for a lab-jack, vice grips for a light source mount, razor blades for a gap and cardboard and tape to hold it all together. Here are some videos from my YouTube page of the 6" mirror. I have a bit better of a setup now. Oct 2009 Update: I built a new platform from parts I salvaged. The only problem I currently have is that the camera I have cuts out a lot of the image due to the complicated internals of the superzoom lens. Send me Feedback!