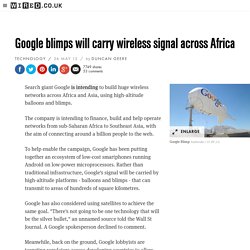 The company is intending to finance, build and help operate networks from sub-Saharan Africa to Southeast Asia, with the aim of connecting around a billion people to the web. To help enable the campaign, Google has been putting together an ecosystem of low-cost smartphones running Android on low-power microprocessors. Rather than traditional infrastructure, Google's signal will be carried by high-altitude platforms - balloons and blimps - that can transmit to areas of hundreds of square kilometres. Google has also considered using satellites to achieve the same goal. "There's not going to be one technology that will be the silver bullet," an unnamed source told the Wall St Journal. Small-scale trials are underway in Cape Town, South Africa, where a base station is broadcasting signals to wireless access boxes in high schools over several kilometres. 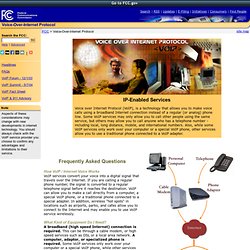 If you are calling a regular phone number, the signal is converted to a regular telephone signal before it reaches the destination. VoIP can allow you to make a call directly from a computer, a special VoIP phone, or a traditional phone connected to a special adapter. In addition, wireless "hot spots" in locations such as airports, parks, and cafes allow you to connect to the Internet and may enable you to use VoIP service wirelessly. What Kind of Equipment Do I Need? A broadband (high speed Internet) connection is required. Is there a difference between making a Local Call and a Long Distance Call? Some VoIP providers offer their services for free, normally only for calls to other subscribers to the service. Postcards connecting the world. Conversations for the 21st Century - weDialogue.

"Just as the tumultuous chaos of a thunderstorm brings a nurturing rain that allows life to flourish, so too in human affairs times of advancement are preceded by times of disorder. 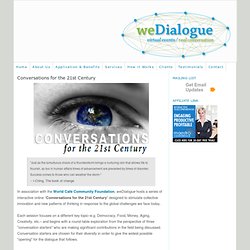 Success comes to those who can weather the storm. "~ I-Ching, The book of change In association with the World Café Community Foundation, weDialogue hosts a series of interactive online “Conversations for the 21st Century” designed to stimulate collective innovation and new patterns of thinking in response to the global challenges we face today. Each session focuses on a different key topic–e.g. After the round table, we'll move into a World Cafe format with three rounds of small group conversation, followed by a "harvest" when the whole group comes back together to share insights and their experience on the call, along with any cutting edge initiatives related to the topic at hand. We encourage everyone with an interest in civic discourse to participate – we all have something valuable to contribute.

Dictionary and reference board. SxCOW.jpg (1824×1368) Interactive. The Berkman Center's Interactive collection features conversations with and talks by leading cyber-scholars, entrepreneurs, activists, and policymakers as they explore topics such as: the factors that influence knowledge creation and dissemination in the digital age; the character of power as the worlds of governance, business, citizenship, and the media meet the Internet; and the opportunities, role, and limitations of new technologies in learning. 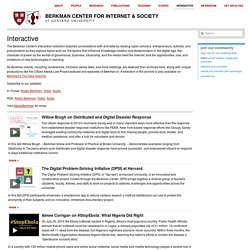 All Berkman events, including conferences, luncheon series talks, and most meetings, are webcast then archived here, along with unique productions like the Citizen Media Law Project podcast and episodes of Berkman.tv. A selection of the archive is also available on Berkman's YouTube channel. Phone calls in Gmail. Blog » Free Speech Zone. In Europe, a Right to Be Forgotten Trumps the Memory of the Internet - John Hendel - Technology.

Why is it that two sprawling yet similar Western cultures -- those on both sides of the Atlantic -- respond so differently to Internet privacy? 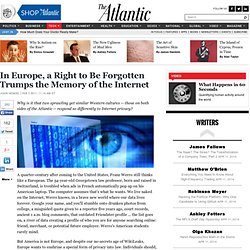 A quarter-century after coming to the United States, Franz Werro still thinks like a European. The 54-year-old Georgetown law professor, born and raised in Switzerland, is troubled when ads in French automatically pop up on his American laptop. The computer assumes that's what he wants. We live naked on the Internet, Werro knows, in a brave new world where our data lives forever.

Google your name, and you'll stumble onto drunken photos from college, a misguided quote given to a reporter five years ago, court records, ancient 1 a.m. blog comments, that outdated Friendster profile ... the list goes on, a river of data creating a profile of who you are for anyone searching online: friend, merchant, or potential future employer. How do you create a space where we're free to analyze the data but not free to abuse the data? Image: o5com/Flickr. One Laptop per Child. What You Always Need To Remember About The Internet.