New Ways Into the Brain’s ‘Music Room’ The new paper “takes a very innovative approach and is of great importance,” said Josef Rauschecker, director of the Laboratory of Integrative Neuroscience and Cognition at Georgetown University. 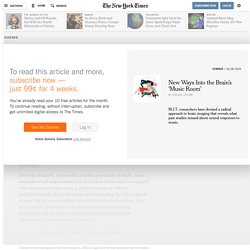 “The idea that the brain gives specialized treatment to music recognition, that it regards music as fundamental a category as speech, is very exciting to me.” In fact, Dr. Rauschecker said, music sensitivity may be more fundamental to the human brain than is speech perception. “There are theories that music is older than speech or language,” he said. “Some even argue that speech evolved from music.” And though the survival value that music held for our ancestors may not be as immediately obvious as the power to recognize words, Dr. Why We Love Music. I still remember when I first heard the song by Peter Gabriel, “Solsbury Hill.” 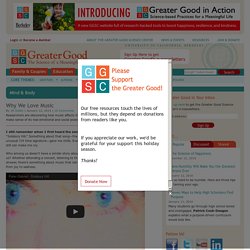 Something about that song—the lyrics, the melody, the unusual 7/4 time signature—gave me chills. Even now, years later, it still can make me cry. Who among us doesn’t have a similar story about a song that touched us?

Body Language. Memetics. To Tug the Heartstrings, Music Must First Tickle the Brain. Why your brain loves music. How Brains See Music as Language - Adrienne LaFrance. A new Johns Hopkins study looks at the neuroscience of jazz and the power of improvisation. 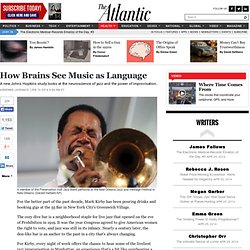 A member of the Preservation Hall Jazz Band performs at the New Orleans Jazz and Heritage Festival in New Orleans. (Gerald Herbert/AP) For the better part of the past decade, Mark Kirby has been pouring drinks and booking gigs at the 55 Bar in New York City's Greenwich Village. The cozy dive bar is a neighborhood staple for live jazz that opened on the eve of Prohibition in 1919. It was the year Congress agreed to give American women the right to vote, and jazz was still in its infancy.

For Kirby, every night of work offers the chance to hear some of the liveliest jazz improvisation in Manhattan, an experience that's a bit like overhearing a great conversation. The idea that jazz can be a kind of conversation has long been an area of interest for Charles Limb, an otolaryngological surgeon at Johns Hopkins. Pope says even improvisational jazz is built around a framework that musicians understand. Mind - Finding Clues to National Well-Being in Songs and Blogs.

Old Man In Nursing Home Reacts To Hearing Music From His Era. The Fading Sounds of Analog Technology. I’ve always loved the musical “Company,” a Broadway show by Stephen Sondheim that opened in 1970. 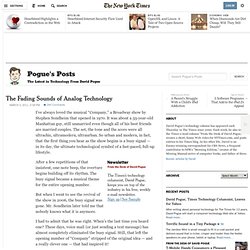 It was about a 35-year-old Manhattan guy, still unmarried even though all of his best friends are married couples. The set, the tone and the score were all ultrachic, ultramodern, ultraurban. So urban and modern, in fact, that the first thing you hear as the show begins is a busy signal — in its day, the ultimate technological symbol of a fast-paced, full-up lifestyle. The Times’s technology columnist, David Pogue, keeps you on top of the industry in his free, weekly e-mail newsletter.Sign up | See Sample After a few repetitions of that insistent, one-note beep, the overture begins building off its rhythm.

Young Women Often Trendsetters in Vocal Patterns. Whether it be uptalk (pronouncing statements as if they were questions? 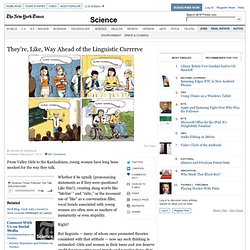 Like this?) , creating slang words like “bitchin’ ” and “ridic,” or the incessant use of “like” as a conversation filler, vocal trends associated with young women are often seen as markers of immaturity or even stupidity. Right? But linguists — many of whom once promoted theories consistent with that attitude — now say such thinking is outmoded.

Girls and women in their teens and 20s deserve credit for pioneering vocal trends and popular slang, they say, adding that young women use these embellishments in much more sophisticated ways than people tend to realize. Healthy Living: Study says guys naturally can't hear women's voices. Typoglycemia Translator. Wrods Downloads by Sente Limited at Software Geek - Home & Education. Secret Military Test, Coming Soon to Your Spanish Class - Issue 12: Feedback. Imagine a test that could tell you how good you can ultimately get in any foreign language, from Hindi to Welsh, from Igbo to Spanish, before you’ve even learned how to say “hello” or “please pass the butter.” 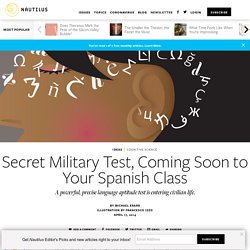 Très alléchant, non? Most adults would have to put in 10 years or more of dedicated work to find out if they have what it takes to end up with the vocabulary, accent, and grammatical sensibilities of a near-native speaker. This test could direct them from the début. And it may be coming your way soon. Called the Hi-LAB (or “High Level Language Aptitude Battery”), it was developed by University of Maryland researchers working on a government contract in order to predict a person’s ability to learn a language to a very high level.

Scientists who study second language acquisition have long been fascinated by the difficulty that adults have in becoming native-like in a language they begin learning after puberty. Many aspects of language can’t be learned. References 1. 2. Languaging.