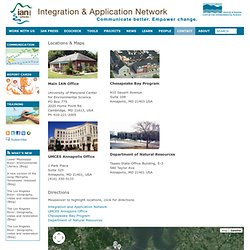 Profiling the dead: learning from mass fatality events. Description of the project and research questions being asked The Archaeological Survey of Nubia began in 1907 and over a period of only a few years over 8000 individuals were excavated, examined, and preserved for future studies on this archaeological population. 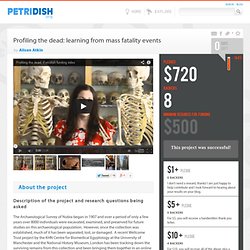 However, since the collection was established, much of it has been separated, lost, or damaged. A recent Wellcome Trust project by the KHN Centre for Biomedical Egyptology at the University of Manchester and the National History Museum, London has been tracking down the surviving remains from this collection and been bringing them together in an online database (link below). As a part of this project they have identified that the remains of individuals from the Roman Period ‘executioner’s trench’ are housed at institutions here in England. Over 100 individuals were found in this ‘executioner's trench’ with evidence of severe (and unusual) trauma and being unceremoniously buried in a mass grave. Soapbox Science: a community guest blog from nature.com.

“3D Printing is a tinkerer’s dream and it’s the DIY Holy Grail to make something that creates things.” 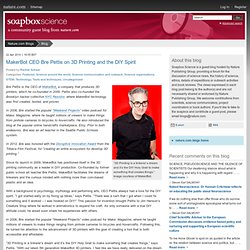 Image courtesy of MakerBot. Marketing for Scientists. How Digital Media Changed, and Continues to Change, Ag Journalism. What happens when you combine digital media with ag journalism? 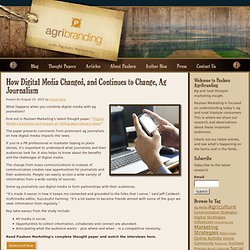 Find out in Paulsen Marketing’s latest thought paper, “Digital Media’s Evolution and Impact on Telling Agriculture’s Story.” The paper presents comments from prominent ag journalists on how digital media impacts the news. If you’re a PR professional or marketer hoping to place stories, it’s important to understand what journalists and their audiences look for. It also helps to know about the benefits and the challenges of digital media. iCancer: closing the net around cancer by getting the public involved. How should the public be involved in deciding the funding of scientific research? 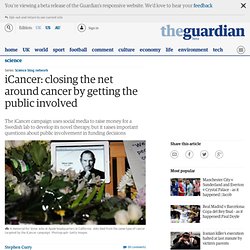 Directly, is the answer offered by a new campaign that hopes to harness the power of social media to develop a treatment for cancer. The iCancer campaign, brainchild of author Alexander Masters, aims to raise funds from the public for research into a new treatment for neuroendocrine tumours (NETs) — cancers of glands in the body that release hormones under the control of the nervous system. NETs are difficult to treat because patients typically present with symptoms only after the cancer has reached a relatively late stage and started to spread to other parts of the body. The Story of You: Encode and the human genome – video. Knowinnovation. Blog. Religion Didn't Kill Science in the Middle East Posted by Ross Pomeroy on April 15, 2014 Science in the Middle East isn't dead, but it isn't exactly alive, either. 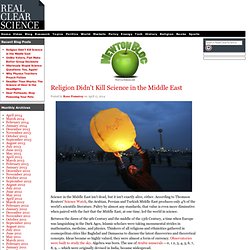 According to Thomson Reuters' Science Watch, the Arabian, Persian and Turkish Middle East produces only 4% of the world's scientific literature. Soapbox Science: Reaching Out: Science has a PR Problem. Science Online New York (SoNYC) encourages audience participation in the discussion of how science is carried out and communicated online. 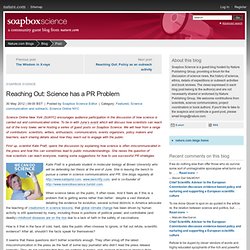 To tie in with June’s event which will discuss how scientists can reach out of the ivory tower, we’re hosting a series of guest posts on Soapbox Science. We will hear from a range of contributors: scientists, writers, enthusiasts, communicators, events organizers, policy makers and teachers, each sharing details about how they reach out to engage with the public. First up, scientist Kate Pratt, opens the discussion by explaining how science is often miscommunicated in the press and how this can sometimes lead to public misunderstandings.

She raises the question of how scientists can reach everyone, making some suggestions for how to use successful PR strategies. Kaite Pratt is a graduate student in molecular biology at Brown University who will be defending her thesis at the end of June. Science Communication Jobs / Vacancies etc - scicomm jobs. Psci-com. Center for Communicating Science. Issue 01, march 2008. Science Communication. Science/PE Videos - Social Media and Science. Refractive Index. Academic publishers run a guarded knowledge economy. Aaron Swartz pictured in Miami Beach, Florida in 2009. 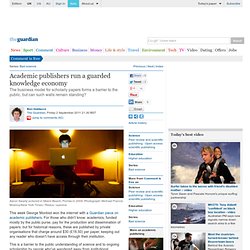 Photograph: Michael Francis Mcelroy/New York Times / Redux / eyevine This week George Monbiot won the internet with a Guardian piece on academic publishers. For those who didn't know: academics, funded mostly by the public purse, pay for the production and dissemination of papers; but for historical reasons, these are published by private organisations that charge around $30 (£18.50) per paper, keeping out any reader who doesn't have access through their institution.

This is a barrier to the public understanding of science and to ongoing scholarship by people who've wandered away from institutional academia. There are open-access alternatives, where academics pay up-front and the paper is free to all, but these are patchy, and require your funder to pay £1,000 per paper. The arguments are big. Bad Science. Bad science. Page not found « Science Blogging Aggregated. Bridge8. Center for Advancement of Informal Science Education (CAISE) » Home. TechNyou. TechNyou was established to meet a growing community need for balanced and factual information on emerging technologies.