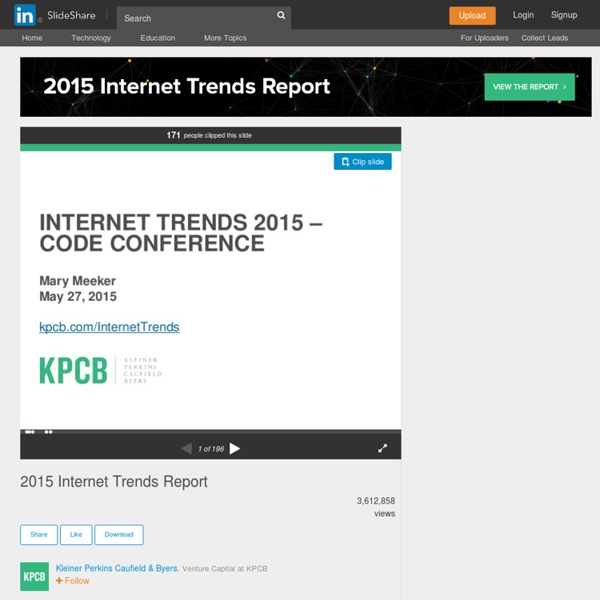 How To Make Easy To Use GUI and UX design Tips First of all let me explain you difference between a web designer and a GUI/UX designer. Well let me explain you with a simple example if you want a website where he can show up some paintings and some simple text, Well in that case a web designer can fit fine but if You wants that people cannot only see those painting plus contact him else they want to buy paintings or we can say any interaction on the page then you need a GUI/UX designer. So ideally if you want a website with multiple interactions on the page with different widgets, icons, forum etc then UI/UX designer is perfect choice for it.

Live-Streaming, Millennials and the Future Whether Twitter’s Periscope is a Meerkat killer is irrelevant now. Live-streaming mobile apps are making waves, and we are just moving into high tide. These apps allow you to watch and comment on live-broadcastings and have everyone from celebrities to politicians diving in. Let’s take a look at who may be using these apps and where marketers are seeing opportunities. Not long has passed since South by Southwest (when Meerkat was launched), but many see live streaming as a content experience too shiny to pass up on. 5 huge trends in big data and storage As cloud computing continues to disrupt traditional business models and big data continues to grow exponentially, techies and investors alike are looking for the top trends that will change how we do business in 2016 and beyond. From emotional robots to driverless cars, here are five breakthrough innovations to keep an eye on as the year unfolds: 1.

Periscope a valuable media platform, but misses mark with Millennials Step aside Snapchat, there appears to be a new app taking over. If Twitter, Instagram and Facebook aren’t enough, Periscope is making its way onto smartphone home screens everywhere. The application, acquired by Twitter earlier this year, allows users around the world to livestream videos, which other users can then watch as they’re taking place. Periscope, however, isn’t merely the newest social media trend.

Burberry to sell its Spring 2015 nail polish on Twitter With Twitter introducing an innovative programme that allows users to purchase products featured in tweets, it was only a matter of time before a fashion house has jumped on the bandwagon. It comes to no surprise that Burberry is the label in question. The British brand will be reportedly selling their Spring 2015 nail polishes on Twitter as the models walk down the runway wearing the hues at London Fashion Week. Only a limited number will be available, so we suspect that it will all be sold out within minutes of the fashion show. Streaming Overtakes Live TV Among Consumer Viewing Preferences: Study U.S. consumers are more inclined to stream entertainment from an Internet service than tune in to live TV, according to the results of a new survey from consulting firm Deloitte. Video-streaming services such as Netflix, which are now used by more than 42% of American households, have overtaken live programming as the viewing method of choice, Deloitte’s study found. About 56% of those surveyed now stream movies and 53% stream TV shows on a monthly basis, as compared with 45% of those who prefer to watch TV programs live. And Internet-video services are valued more highly than cable or satellite TV among consumers aged 14-25, a group Deloitte dubs “Trailing Millennials” — another worrisome indicator for the pay-TV biz. For that age group, 72% cited streaming video as one of the most valuable services versus 58% who said the same for pay TV.

How Brands Are Paving the Way for Periscope Marketing As more brands join and use apps like Periscope and Meerkat, it’s becoming clear that live streaming will play a major role in digital and social marketing in the coming months and years. Live streaming is anything but new; however, it’s recently jumped to the forefront of industry discussions, since the launch of Meerkat and Periscope. YouTube has long featured live-streaming options, dedicated websites allow users to broadcast feeds, gamers have always had an affinity toward watching other gamers (Twitch attracts more than 45 million viewers each month) and cable companies often stream live programming over the Internet. Related: Real-Time Video Streaming on Social Media Is Driving the Publishing Craze But, aside from Twitch, you could argue that no technology, app or website has risen to such prominence as quickly as Periscope (and Meerkat, to a lesser extent).

數位顧問正在蓬勃起飛 The business world is going digital at an increasingly fast pace. So it’s important to understand what a Digital Consultant is and why your company should have one. First let’s define before we go forward: A digital consultant doesn’t consult your business in the traditional sense. They help you with how and where your business should exist digitally.