Why Hierarchy Is Outdated: The (Long Overdue) Need For Organizational Adaptability. How to Fix Open Offices. Variety is key Don't just ditch the partitions: To be ­effective, open plans need to offer a range of ­areas. 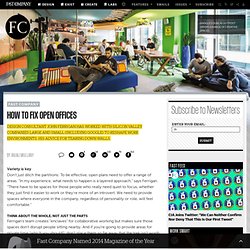 "In my experience, what needs to happen is a layered ­approach," says Ferrigan. 24 Hours with Norma Marin. About Norma Often clocking 16-hour days, Norma Marin, 34, works two part-time jobs at McDonald's in Chicago to support her family. 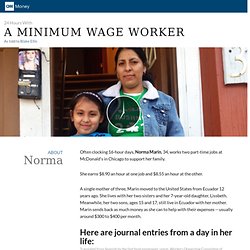 She earns $8.90 an hour at one job and $8.55 an hour at the other. A single mother of three, Marin moved to the United States from Ecuador 12 years ago. She lives with her two sisters and her 7-year-old daughter, Lissbeth. Here are journal entries from a day in her life: Translated from Spanish by the fast food employees' union, Workers Organizing Committee of Chicago, that Marin belongs to. I get up a little earlier than usual today so I can make lunch for my daughter (rice and chicken) and get her school uniform out and ready for her to wear today.

Look At The Insane Perks Google Interns Have That You Don't. MOUNTAIN VIEW, Calif. 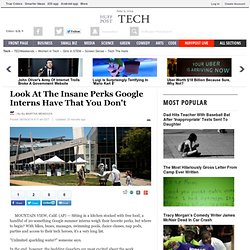 (AP) — Sitting in a kitchen stocked with free food, a handful of 20-something Google summer interns weigh their favorite perks, but where to begin? With bikes, buses, massages, swimming pools, dance classes, nap pods, parties and access to their tech heroes, it's a very long list. "Unlimited sparkling water? " someone says. Wage Strikes Planned at Fast-Food Outlets. Capital - Managers: Train your brain for ethical decisions. But Griffiths doesn’t teach the hunt-and-butcher course for outdoors types. 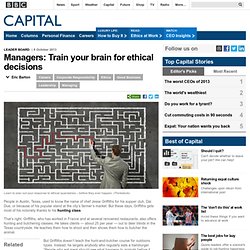 Instead, he targets anybody who regularly eats a hamburger. “People who eat meat should see what happens to animals before it ends up on their table,” Griffiths said. “Every time they consume an animal, they should make sure they’re comfortable with it.” At all costs, avoid justifying a bad decision. This begs a question for the rest of us: If diners are being asked to think more about the source of their food, why stop at the dinner table? 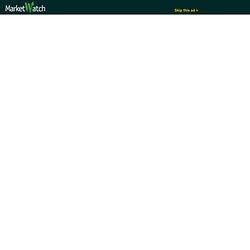 It also has provided more than $18 million in grants through its Leading the Way Home(R) Program Priority Markets Initiative, which offers grants for large building or renovation projects. 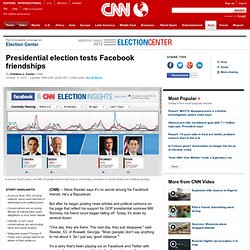 A survey finds 18% of social network users have blocked or defriended over political postsConservatives are accusing liberals of making false spam allegations to shut down debateLiberals, in turn, says conservatives are advocating block and report actionsNetiquette expert Thomas P. Farley says people need to be aware of their audience (CNN) -- Steve Reeder says it's no secret among his Facebook friends: He's a Republican. But after he began posting news articles and political cartoons on his page that reflect his support for GOP presidential nominee Mitt Romney, his friend count began falling off. Wal-Mart Tests Same-Day Delivery. Are Corporate-Nonprofit Partnerships Doomed? - Give and Take. Intel and the nonprofit project, One Laptop Per Child, have officially parted ways, ending a collaboration that was marked by controversy almost from the start. 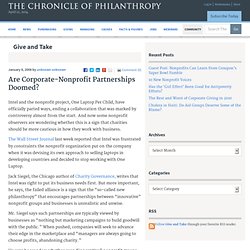 And now some nonprofit observers are wondering whether this is a sign that charities should be more cautious in how they work with business. The Wall Street Journal last week reported that Intel was frustrated by constraints the nonprofit organization put on the company when it was devising its own approach to selling laptops in developing countries and decided to stop working with One Laptop.

Jack Siegel, the Chicago author of Charity Governance, writes that Intel was right to put its business needs first. But more important, he says, the failed alliance is a sign that the “so-called new philanthropy” that encourages partnerships between “innovative” nonprofit groups and businesses is unrealistic and unwise. Mr. BP executives sought to blame blue collar rig workers: U.S.