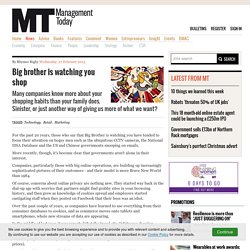 More recently, though, it's become clear that governments aren't alone in their interest. Companies, particularly those with big online operations, are building up increasingly sophisticated pictures of their customers - and their model is more Brave New World than 1984. Attention, Shoppers - Store Is Tracking Your Cell. This video is not currently supported on your browser. 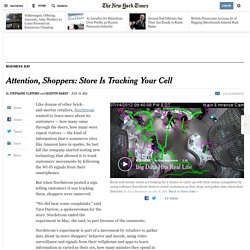 Continue reading the main story Video Like dozens of other brick-and-mortar retailers, wanted to learn more about its customers — how many came through the doors, how many were repeat visitors — the kind of information that e-commerce sites like Amazon have in spades. So last fall the company started testing new technology that allowed it to track customers’ movements by following the Wi-Fi signals from their smartphones. But when Nordstrom posted a sign telling customers it was tracking them, shoppers were unnerved.

Smartphones are killing us — and destroying public life. The host collects phones at the door of the dinner party. 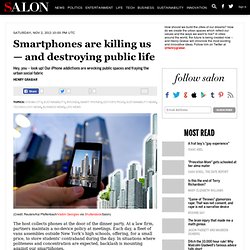 At a law firm, partners maintain a no-device policy at meetings. Each day, a fleet of vans assembles outside New York’s high schools, offering, for a small price, to store students’ contraband during the day. TechCrunch. Is Facebook making us sad? Stanford University research and Sherry Turkle's new book Alone Together suggest that social networking may foster loneliness. There are countless ways to make yourself feel lousy. 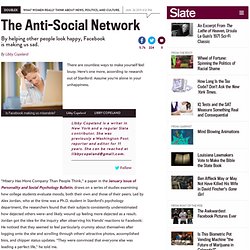 Here's one more, according to research out of Stanford: Assume you're alone in your unhappiness. Libby Copeland is a writer in New York and a regular Slate contributor. She was previously a Washington Post reporter and editor for 11 years. She can be reached at libbycopeland@gmail.com. Follow "Misery Has More Company Than People Think," a paper in the January issue of Personality and Social Psychology Bulletin, draws on a series of studies examining how college students evaluate moods, both their own and those of their peers. The human habit of overestimating other people's happiness is nothing new, of course. In one of the Stanford studies, Jordan and his fellow researchers asked 80 freshmen to report whether they or their peers had recently experienced various negative and positive emotional events. 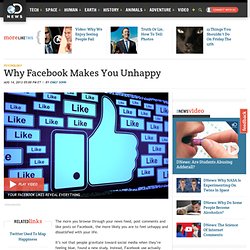 It’s not that people gravitate toward social media when they’re feeling blue, found a new study. Instead, Facebook use actually seems to breed discontent. Facebook Is Making Us Unhappy, Fact. We Ask Top Happiness Experts For Advice On Switching Off (PICTURES) Unlike the Cyberdyne Corporation from The Terminator, we don't have to wait for Facebook to go sentient and start taking over the world by making decisions for us. 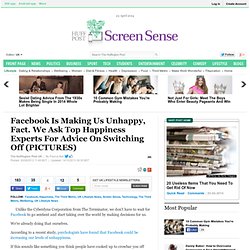 We're already doing that ourselves. According to a recent study, psychologists have found that Facebook could be increasing our levels of unhappiness. If this sounds like something you think people have cooked up to crowbar you off Facebook, there is science behind it that confirms what we've known for a while: we need to start creating boundaries between technology and ourselves. Study leader Dr Ethan Kross, from the University of Michigan in the US, said: "On the surface, Facebook provides an invaluable resource for fulfilling the basic human need for social connection. Unsociable networking: Researchers say checking Facebook can make you miserable and jealous. Researchers say more than a third of users 'feel worse' after visiting the siteHoliday pictures and images of busy social lives 'the most depressing posts' By Allan Hall In Berlin Published: 10:30 GMT, 22 January 2013 | Updated: 16:04 GMT, 22 January 2013 Facebook 'makes you miserable': Study claims that site founded by Mark Zuckerberg, pictured at a conference in San Francisco, triggers feelings of envy Facebook can make you feel socially isolated and miserable because seeing friends' happy pictures triggers feelings of envy, two studies have found. 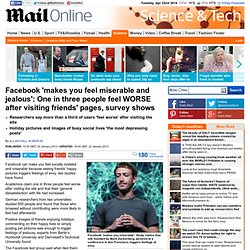 Social Screening: How Companies Are Using Social Media To Hire & Fire Employees. Are new technologies making us happier? Late one night, I was lying in bed, exchanging emails (regarding world domination) with my boss. 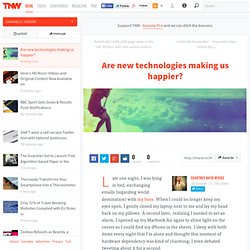 When I could no longer keep my eyes open, I gently closed my laptop next to me and lay my head back on my pillows. A second later, realizing I needed to set an alarm, I opened up my Macbook Air again to shine light on the covers so I could find my iPhone in the sheets. I sleep with both items every night that I’m alone and thought this moment of hardware dependency was kind of charming; I even debated tweeting about it for a second. Flash forward one month and I’m lying on a beach on an island an hour off the coast of Puerto Rico. Employers warned about snooping on staff via social networks.