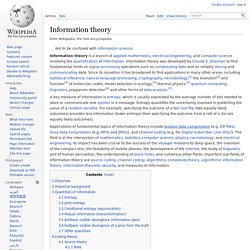 Two important aspects of a concise language are as follows: First, the most common words (e.g., "a", "the", "I") should be shorter than less common words (e.g., "roundabout", "generation", "mediocre"), so that sentences will not be too long. Such a tradeoff in word length is analogous to data compression and is the essential aspect of source coding. Second, if part of a sentence is unheard or misheard due to noise — e.g., a passing car — the listener should still be able to glean the meaning of the underlying message. Such robustness is as essential for an electronic communication system as it is for a language; properly building such robustness into communications is done by channel coding. 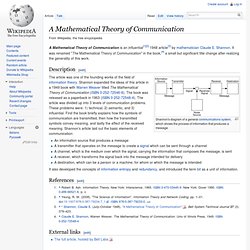 Shannon. It was renamed "The Mathematical Theory of Communication" in the book,[4] a small but significant title change after realizing the generality of this work. Description[edit] Radio network. The Two-way type of radio network shares many of the same technologies and components as the Broadcast type radio network but is generally set up with fixed broadcast points (transmitters) with co-located receivers and mobile receivers/transmitters or Tran-ceivers.

In this way both the fixed and mobile radio units can communicate with each other over broad geographic regions ranging in size from small single cities to entire states/provinces or countries. There are many ways in which multiple fixed transmit/receive sites can be interconnected to achieve the range of coverage required by the jurisdiction or authority implementing the system: conventional wireless links in numerous frequency bands, fibre-optic links, or micro-wave links. In all of these cases the signals are typically backhauled to a central switch of some type where the radio message is processed and resent (repeated) to all transmitter sites where it is required to be heard. Broadcasting networks[edit] Australia[edit] Baud. Where fs is the symbol rate. 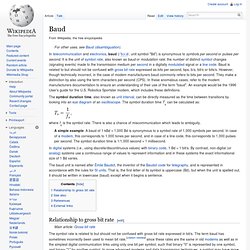 There is also a chance of miscommunication which leads to ambiguity. A simple example: A baud of 1 kBd = 1,000 Bd is synonymous to a symbol rate of 1,000 symbols per second. In case of a modem, this corresponds to 1,000 tones per second, and in case of a line code, this corresponds to 1,000 pulses per second. The symbol duration time is 1/1,000 second = 1 millisecond. In digital systems (i.e., using discrete/discontinuous values) with binary code, 1 Bd = 1 bit/s. Symbol rate. In digital communications, symbol rate (also known as baud or modulation rate) is the number of symbol changes (waveform changes or signalling events) made to the transmission medium per second using a digitally modulated signal or a line code. 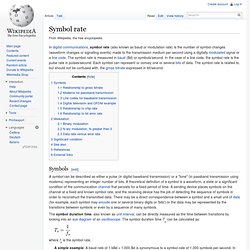 The symbol rate is measured in baud (Bd) or symbols/second. In the case of a line code, the symbol rate is the pulse rate in pulses/second. Each symbol can represent or convey one or several bits of data. The symbol rate is related to, but should not be confused with, the gross bitrate expressed in bit/second. Wireless Electronics (suppliers) ☆Team curated. Baud Rate. The baud rate of a data communications system is the number of symbols per second transferred. 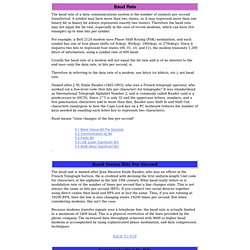 A symbol may have more than two states, so it may represent more than one binary bit (a binary bit always represents exactly two states). Therefore the baud rate may not equal the bit rate, especially in the case of recent modems, which can have (for example) up to nine bits per symbol. For example, a Bell 212A modem uses Phase Shift Keying (PSK) modulation, and each symbol has one of four phase shifts (of 0(deg), 90(deg), 180(deg), or 270(deg)). Since it requires two bits to represent four states (00, 01, 10, and 11), the modem transmits 1,200 bits/s of information, using a symbol rate of 600 baud. What is an Erlang. Communication Theory — Korea University OpenCourseWare.

USA Radio Spectrum. Allochrt. Radio frequency. Radio frequency (RF) is a rate of oscillation in the range of around 3 kHz to 300 GHz, which corresponds to the frequency of radio waves, and the alternating currents which carry radio signals. 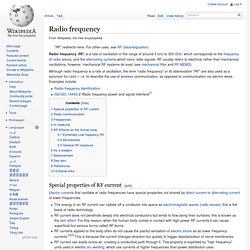 RF usually refers to electrical rather than mechanical oscillations; however, mechanical RF systems do exist (see mechanical filter and RF MEMS). Although radio frequency is a rate of oscillation, the term "radio frequency" or its abbreviation "RF" are also used as a synonym for radio – i.e. to describe the use of wireless communication, as opposed to communication via electric wires. Examples include: Special properties of RF current[edit] Electric currents that oscillate at radio frequencies have special properties not shared by direct current or alternating current of lower frequencies. How Token Ring Works. Unlike Ethernet, Token Ring uses a ring topology whereby the data is sent from one machine to the next and so on around the ring until it ends up back where it started. 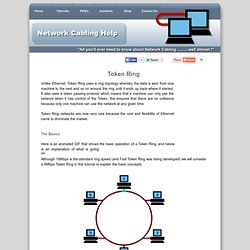 It also uses a token passing protocol which means that a machine can only use the network when it has control of the Token, this ensures that there are no collisions because only one machine can use the network at any given time.Token Ring networks are now very rare because the cost and flexibility of Ethernet came to dominate the market. Network Science.