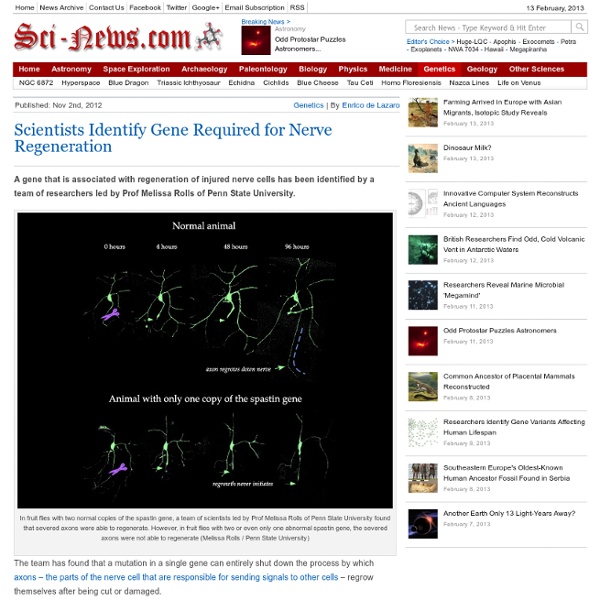 A gene that is associated with regeneration of injured nerve cells has been identified by a team of researchers led by Prof Melissa Rolls of Penn State University. In fruit flies with two normal copies of the spastin gene, a team of scientists led by Prof Melissa Rolls of Penn State University found that severed axons were able to regenerate. However, in fruit flies with two or even only one abnormal spastin gene, the severed axons were not able to regenerate (Melissa Rolls / Penn State University) The team has found that a mutation in a single gene can entirely shut down the process by which axons – the parts of the nerve cell that are responsible for sending signals to other cells – regrow themselves after being cut or damaged. “We are hopeful that this discovery will open the door to new research related to spinal-cord and other neurological disorders in humans,” said Prof Rolls, who co-authored a paper published online in the journal Cell Reports. Related:  science and beyond • Physiology & Genetics • Medical Science

Magnesium, Iodine and Sodium Bicarbonate by Mark Sircus Ac., OMD International Medical Veritas Association Edited by danreid.org Number One: Magnesium Chloride Magnesium chloride occupies the number one slot in all our protocols. I continue to receive testimonies that justify its placement as the most needed and useful medicinal substance in the world. I have been on a medication called Baclofen for severe muscle spasms. Just this morning I was reading one of David Brownstein's wonderful books called Salt Your Way To Health and discovered that the chloride in salt helps the kidneys to clear or detoxify the body of bromide, which is a potent poison that is stupidly used in both medicines and foods, especially the white bread you buy from a store. Number Two: Iodine Iodine occupies the number two spot in the IMVA protocol for cancer, infections, and a host of other acute and chronic clinical situations. We also need iodine for our immune system to work properly.

Effect of parity on fetal and maternal microchimerism: interaction of grafts within a host? | Blood | American Society of Hematology Individuals harbor small amounts of foreign cells or DNA, referred to as microchimerism (Mc). Acquisition of Mc naturally occurs primarily during pregnancy, through transplacental cell trafficking between mother and fetus. An adult woman acquired Mc from her own mother (maternal Mc, or MMc) when she herself was a fetus. This “graft,” acquired during fetal immune system development, can remain in her system into adulthood1 and represents a pre-existing inhabitant as she experiences pregnancy herself. During subsequent pregnancies, new fetal sources of microchimerism (fetal Mc, or FMc) are acquired. As a therapeutic parallel to this natural process, the arena of stem cell transplantation can provide some insights into the host response to Mc and the interaction between acquired grafts. We asked whether there is a relationship between increasing parity and the prevalence of Mc. Peripheral blood samples were obtained from all probands (primary participants). Table 2 Figure 1 Table 3 Figure 2

Getting stem cells from urine Human induced pluripotent stem cells (iPSCs) have been generated with varied efficiencies from multiple tissues. Yet, acquiring donor cells is, in most instances, an invasive procedure that requires laborious isolation. Here we present a detailed protocol for generating human iPSCs from exfoliated renal epithelial cells present in urine. View full text Figures Human Cells have Electric Fields as Powerful as Lighting Bolts -A Galaxy Insight Using newly developed voltage-sensitive nanoparticles, researchers have found that the previously unknown electric fields inside of cells are as strong, or stronger, as those produced in lightning bolts. Previously, it has only been possible to measure electric fields across cell membranes, not within the main bulk of cells, so scientists didn't even know cells had an internal electric field. This discovery is a surprising twist for cell researchers. Scientists don't know what causes these incredibly strong fields or why they' are there. But now using new nanotools, such as voltage-sensitive dyes, they can start to measure them at least. Researchers believe they may be able to learn more about disease states, such as cancer, by studying these minute, but powerful electric fields. University of Michigan researchers led by chemistry professor Raoul Kopelman encapsulated voltage-sensitive dyes in polymer spheres just 30 nanometers in diameter. Posted by Rebecca Sato Related Galaxy posts:

Only a tiny fraction of our DNA is uniquely human The genetic tweaks that make humans uniquely human may come in small parcels interspersed with DNA inherited from extinct ancestors and cousins. Only 1.5 percent to 7 percent of the collective human genetic instruction book, or genome, contains uniquely human DNA, researchers report July 16 in Science Advances. That humans-only DNA, scattered throughout the genome, tends to contain genes involved in brain development and function, hinting that brain evolution was important in making humans human. But the researchers don’t yet know exactly what the genes do and how the exclusively human tweaks to DNA near those genes may have affected brain evolution. “I don’t know if we’ll ever be able to say what makes us uniquely human,” says Emilia Huerta-Sanchez, a population geneticist at Brown University in Providence, R.I., who was not involved in the study. “We don’t know whether that makes us think in a specific way or have specific behaviors.” Sign Up For the Latest from Science News