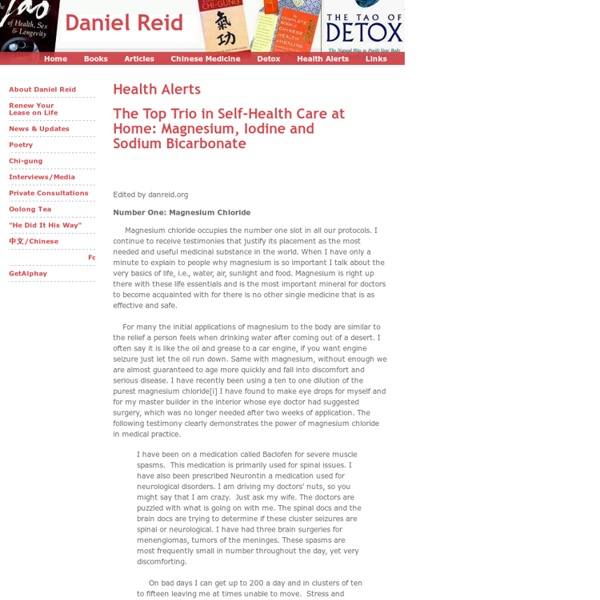 by Mark Sircus Ac., OMD International Medical Veritas Association Edited by danreid.org Number One: Magnesium Chloride Magnesium chloride occupies the number one slot in all our protocols. I continue to receive testimonies that justify its placement as the most needed and useful medicinal substance in the world. When I have only a minute to explain to people why magnesium is so important I talk about the very basics of life, i.e., water, air, sunlight and food. I have been on a medication called Baclofen for severe muscle spasms. Just this morning I was reading one of David Brownstein's wonderful books called Salt Your Way To Health and discovered that the chloride in salt helps the kidneys to clear or detoxify the body of bromide, which is a potent poison that is stupidly used in both medicines and foods, especially the white bread you buy from a store. Number Two: Iodine We also need iodine for our immune system to work properly. Related:  science and beyond • Medical Science

Science Confirms Turmeric As Effective As 14 Drugs Turmeric is one the most thoroughly researched plants in existence today. Its medicinal properties and components (primarily curcumin) have been the subject of over 5600 peer-reviewed and published biomedical studies. In fact, our five-year long research project on this sacred plant has revealed over 600 potential preventive and therapeutic applications, as well as 175 distinct beneficial physiological effects. This entire database of 1,585 ncbi-hyperlinked turmeric abstracts can be downloaded as a PDF at our Downloadable Turmeric Document page, and acquired either as a retail item or with 200 GMI-tokens, for those of you who are already are members and receive them automatically each month. Given the sheer density of research performed on this remarkable spice, it is no wonder that a growing number of studies have concluded that it compares favorably to a variety of conventional medications, including: Resources www.greenmedinfo.com Eddie L. is the founder and owner of WorldTruth.TV.

Your Cayenne Pepper Guide Scientists Identify Gene Required for Nerve Regeneration | Genetics A gene that is associated with regeneration of injured nerve cells has been identified by a team of researchers led by Prof Melissa Rolls of Penn State University. In fruit flies with two normal copies of the spastin gene, a team of scientists led by Prof Melissa Rolls of Penn State University found that severed axons were able to regenerate. However, in fruit flies with two or even only one abnormal spastin gene, the severed axons were not able to regenerate (Melissa Rolls / Penn State University) The team has found that a mutation in a single gene can entirely shut down the process by which axons – the parts of the nerve cell that are responsible for sending signals to other cells – regrow themselves after being cut or damaged. “We are hopeful that this discovery will open the door to new research related to spinal-cord and other neurological disorders in humans,” said Prof Rolls, who co-authored a paper published online in the journal Cell Reports.

Consciousness: Eight questions science must answer | Anil Seth | Science Consciousness is at once the most familiar and the most mysterious feature of our existence. A new science of consciousness is now revealing its biological basis. Once considered beyond the reach of science, the neural mechanisms of human consciousness are now being unravelled at a startling pace by neuroscientists and their colleagues. I've always been fascinated by the possibility of understanding consciousness, so it is tremendously exciting to witness – and take part in – this grand challenge for 21st century science. Here are eight key questions that neuroscientists are now addressing: 1. The brain contains about 90 billion neurons, and about a thousand times more connections between them. But consciousness isn't just about having a large number of neurons. Current hot topics include the role of the brain's densely connected frontal lobes, and the importance of information flow between regions rather than their activity per se. 2. 3. 4. 5. 6. 7. 8.

Dr. David Derry Answers Reader Questions -- Disappearing Iodine Test Topic: Disappearing Iodine Test A Reader Writes: A friend of mine was just diagnosed with a possible thyroid disorder (her test was in the form of a drop of iodine on her arm and watching how fast it disappeared). Her chiropractor suggested she start off by taking something called Thyroid Helper which can be found at ..... Have you ever heard of this and do you know how effective it might be? David Derry Responds: The "test" of putting iodine on the skin to watch how fast it disappears is not an indicator of anything. However Nyiri and Jannitti's findings that “The percentage of iodine penetration through the skin is the same, irrespective of whether the cells have a high or low vitality, or are dead, and irrespective of the direction of penetration" have important implications for iodine functions in the body, skin, pregnancy and fetus and also for the therapeutic use of topical and oral iodine. "On September 29, 1862, Colonel John B. Dr. Mrs. I hope these concepts help. David References 1.

Male and female brains wired differently, scans reveal | Science Scientists have drawn on nearly 1,000 brain scans to confirm what many had surely concluded long ago: that stark differences exist in the wiring of male and female brains. Maps of neural circuitry showed that on average women's brains were highly connected across the left and right hemispheres, in contrast to men's brains, where the connections were typically stronger between the front and back regions. Ragini Verma, a researcher at the University of Pennsylvania, said the greatest surprise was how much the findings supported old stereotypes, with men's brains apparently wired more for perception and co-ordinated actions, and women's for social skills and memory, making them better equipped for multitasking. "If you look at functional studies, the left of the brain is more for logical thinking, the right of the brain is for more intuitive thinking. So if there's a task that involves doing both of those things, it would seem that women are hardwired to do those better," Verma said.

Old wives cures: baking soda (NaturalNews) In a world awash with pharmaceutical drugs for everything from dandruff to toenail fungus, it's refreshing to have do-it-yourself home remedies and trusted old wives cures to heal a wide range of ailments. Baking soda is a staple in most homes and is useful for cooking, cleaning and in many home remedies. Although it's safe when used as directed, baking soda can cause side effects. Sources for this article include: About the author:READ MORE OF JEAN (JB) BARDOT''S ARTICLES AT THE FOLLOWING LINKS: The JB Bardot Archives: www.jbbardot.comNatural News: JB Bardot is an herbalist and a classical homeopath, and has a post graduate degree in holistic nutrition. Take Action: Support Natural News by linking to this article from your website Permalink to this article: Reprinting this article:

Human Cells have Electric Fields as Powerful as Lighting Bolts -A Galaxy Insight Using newly developed voltage-sensitive nanoparticles, researchers have found that the previously unknown electric fields inside of cells are as strong, or stronger, as those produced in lightning bolts. Previously, it has only been possible to measure electric fields across cell membranes, not within the main bulk of cells, so scientists didn't even know cells had an internal electric field. This discovery is a surprising twist for cell researchers. University of Michigan researchers led by chemistry professor Raoul Kopelman encapsulated voltage-sensitive dyes in polymer spheres just 30 nanometers in diameter. "They have developed a tool that allows you to look at cellular changes on a very local level," said Piotr Grodzinski, director of the National Cancer Institute Alliance for Nanotechnology in Cancer in Technology Review. Kopelman has developed encapsulated voltage-sensitive dyes that aren't hydrophobic and can operate anywhere in the cell, rather than just in membranes.

7 Incredible Inventions by Teenage Wunderkinds When many of us were in our teens, work for science fairs comprised cut and paste displays on colorful presentation boards, and our hobbies weren't exactly about to change the world. But across the globe, teenagers with creative, scientific minds are already devising extraordinary devices, revolutionary materials and renewable technologies that might just change our planet for the greener. Click through to see some of their most incredible inventions - from bioplastics made from bananas to pee-powered energy generators and an ocean cleanup array to rid the world's oceans of waste. An Ocean Clean Up Array to Remove 7,250,000 Tons of Plastic From the World’s Oceans When we first covered Boyan Slat’s Ocean Cleanup Array it generated a phenomenal amount of excitement, as well as debate. The 19-year-old Dutch aerospace engineering student devised the array to be dispatched to the world’s garbage patches, with an initial estimate the the oceans could be cleaned up in around 5 years.