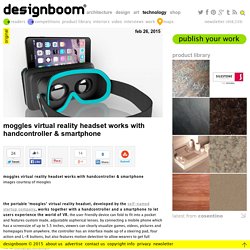 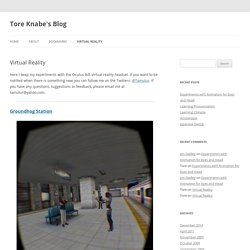 If you want to be notified when there is something new you can follow me on the Twitters: @Tamulur. If you have any questions, suggestions or feedback, please email me at tamulur@yahoo.com. Groundhog Station Short experiment for the Razer Hydra. Not much replayability value, but for a while it is interesting to have NPCs come up to you and interact with you like real humans. A train arrives at the Groundhog Station. Windows, Oculus Runtime 0.4.3 or newer: GroundHogStation_1.1.zip Let’s Dance Short experiment with delayed mimicry for the Razer Hydra.

Update: I was just dancing with the woman in the red vest and at the very moment when our virtual hands happened to touch, my real hand accidentally touched the Hydra base. IK system used: FinalIK Controls: Left Hydra: Button 4: Recenter view START: Recalibrate hands Right Hydra: START: Switch to next song. News Bits: Dazzling New Unreal 4 DK2 Demo Drops You into a Bullet Time Action Scene. Epic‘s Unreal engine has been front and centre in Oculus’ technical demonstrations since the Oculus Rift HD Prototype appeared just over a year ago and ever since. 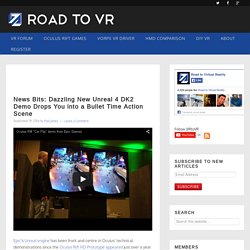 From the dazzling Elemental demo used to debut UE4 to the unnamed tower defence demo used to demonstrate the Crystal Cove’s new positional tracking tech and finally Coach Knights, used at the DK2 launch. Not to mention the raft of sample demo’s available from the UE4 marketplace. See Also: Download 13 Beautiful Unreal Engine 4 Examples for the Oculus Rift DK2 It looks as if the trend continues, this time at nVidia‘s recent Editor’s Day, a press event used to launch their new Maxwell line of GPUs and a slew of new VR based tech.

The demo scene captured above by Tweaktown shows a new demo from Epic which drops you into the centre of a chaotic action sequence played out in super slow motion, allowing you to move through the action as the scene plays out. Leap Motion Developers. The Rift Arcade Market. Oculus VR Share (Beta) Bank Limit is a futuristic combat magnet racer. 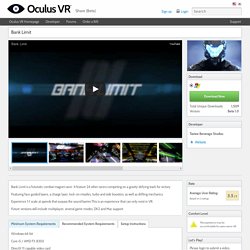