Magnetic and electric effects on water 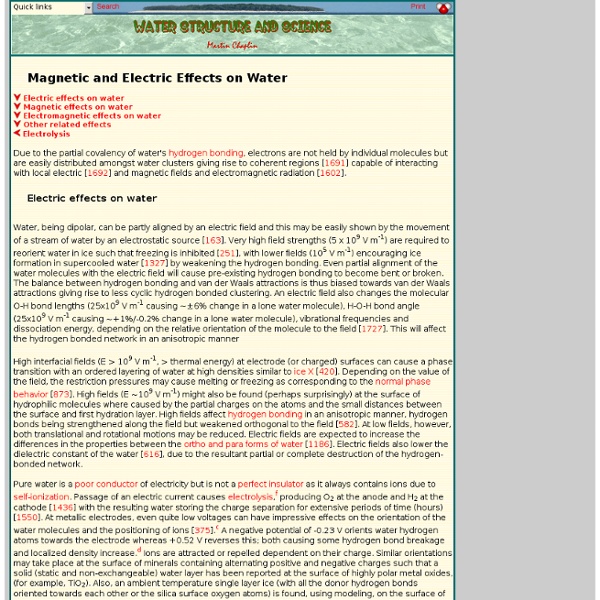 Related:  science and beyond • Breaking Technology

Magnesium, Iodine and Sodium Bicarbonate by Mark Sircus Ac., OMD International Medical Veritas Association Edited by danreid.org Number One: Magnesium Chloride Magnesium chloride occupies the number one slot in all our protocols. I continue to receive testimonies that justify its placement as the most needed and useful medicinal substance in the world. When I have only a minute to explain to people why magnesium is so important I talk about the very basics of life, i.e., water, air, sunlight and food. I have been on a medication called Baclofen for severe muscle spasms. Just this morning I was reading one of David Brownstein's wonderful books called Salt Your Way To Health and discovered that the chloride in salt helps the kidneys to clear or detoxify the body of bromide, which is a potent poison that is stupidly used in both medicines and foods, especially the white bread you buy from a store. Number Two: Iodine We also need iodine for our immune system to work properly.

Synthetic biology, ethics and the hacker culture Read Thomas L. Friedman’s “The World is Flat” or Neal Stephenson’s “Cryptonomicon”, and you get a glimpse into how the hacker culture that emerged at the tail end of the twentieth century revolutionized the digital world. Will a confluence of emerging technologies—including information tech, biotech, and nanotech—lead to a similar revolution in the biological world? Behind every computer screen is a complexity of software and hardware that together create a virtual world in which many of us spend more time living out our lives than is probably healthy—whether crunching numbers, playing games or churning out our latest blog. This world is built in part (some would say a large part) on the work of technically savvy individuals—hackers—who have learned the art of manipulating the fundamental building blocks of the digital world. Reading through a just-released report on the social and ethical challenges of synthetic biology commissioned by the U.K.

Science Confirms Turmeric As Effective As 14 Drugs Turmeric is one the most thoroughly researched plants in existence today. Its medicinal properties and components (primarily curcumin) have been the subject of over 5600 peer-reviewed and published biomedical studies. In fact, our five-year long research project on this sacred plant has revealed over 600 potential preventive and therapeutic applications, as well as 175 distinct beneficial physiological effects. This entire database of 1,585 ncbi-hyperlinked turmeric abstracts can be downloaded as a PDF at our Downloadable Turmeric Document page, and acquired either as a retail item or with 200 GMI-tokens, for those of you who are already are members and receive them automatically each month. Given the sheer density of research performed on this remarkable spice, it is no wonder that a growing number of studies have concluded that it compares favorably to a variety of conventional medications, including: Resources www.greenmedinfo.com Eddie L. is the founder and owner of WorldTruth.TV.

Flowers get an electrifying buzz out of visiting bees - life - 21 February 2013 Plants could turn out to be one of the more chatty organisms. Recent studies have shown they can communicate with a surprising range of cues. Now it turns out they could be sending out electrical signals, too. As they fly through the air, bees – like all insects – acquire a positive electric charge. Flowers, on the other hand, are grounded and so have a negative charge. To test the idea, the team created artificial flowers, filling some with sucrose and others with quinine, a substance bees don't feed on. "That was the first hint that had us jumping up and down in the lab," says Robert. Next, his team looked at whether the bees were influenced by the shape of a flower's electric field, which is determined by the flower's shape. Ruthless evolution The researchers don't know exactly what information is contained in the flowers' electrical signals, but they speculate that flowers could evolve different shaped fields in their competition to attract pollinators. Dishonest advertising

DNA trick throws ageing into reverse - health - 29 November 2010 A technique to keep the tips of your chromosomes healthy could reverse tissue ageing. The work, which was done in mice, is yet more evidence of a causal link between chromosome length and age-related disease. Telomeres, the caps of DNA which protect the ends of chromosomes, shorten every time cells divide. But cells stop dividing and die when telomeres drop below a certain length – a normal part of ageing. Mariela Jaskelioff and her colleagues at the Dana Farber Cancer Institute in Boston, Massachusetts, engineered mice with short telomeres and inactive telomerase to see what would happen when they turned the enzyme back on. Four weeks after the team switched on the enzyme, they found that tissue had regenerated in several organs, new brain cells were developing and the mice were living longer. Journal reference: Nature, DOI: 10.1038/nature09603 New Scientist Not just a website! More From New Scientist Space tourist vehicle unveiled in Russia (New Scientist) More from the web Recommended by

Consciousness: Eight questions science must answer | Anil Seth | Science Consciousness is at once the most familiar and the most mysterious feature of our existence. A new science of consciousness is now revealing its biological basis. Once considered beyond the reach of science, the neural mechanisms of human consciousness are now being unravelled at a startling pace by neuroscientists and their colleagues. I've always been fascinated by the possibility of understanding consciousness, so it is tremendously exciting to witness – and take part in – this grand challenge for 21st century science. Here are eight key questions that neuroscientists are now addressing: 1. The brain contains about 90 billion neurons, and about a thousand times more connections between them. But consciousness isn't just about having a large number of neurons. Current hot topics include the role of the brain's densely connected frontal lobes, and the importance of information flow between regions rather than their activity per se. 2. 3. 4. 5. 6. 7. 8.

Scientists Just Created Crystals That Make Breathing Underwater A Possibility Danish scientists are a step closer to significantly helping people who suffer from respiratory ailments, thanks to a revolutionary new absorption crystal. Working out of the University of Southern Denmark, the group has uncovered crystalline materials which are capable of pulling oxygen out of both air and water, a discovery which could eventually mark the end of the need to carry around cumbersome oxygen tanks. The revolutionary crystalline material can bind and store oxygen in high concentrations, then control its release time depending on what the user needs. This new discovery could even benefit deep sea divers, giving them superhero-like abilities to stay submerged for extended periods of time without an air tank. The standard human body can function with only 21% oxygen in the air around us, but about when we need it in higher concentrations? The crystalline material changes color when absorbing or releasing oxygen. Professor McKenzie also revealed: Christine McKenzie explains:

DNA Phantom Effect INTRODUCTIONIn this contribution I am going to describe some observations and interpretations of a recently discovered anomalous phenomenon which we are calling the DNA Phantom Effect in Vitro or the DNA Phantom for short. We believe this discovery has tremendous significance for the explanation and deeper understandings of the mechanisms underlying subtle energy phenomena including many of the observed alternative healing phenomena [1,2]. This data also supports the heart intelligence concept and model developed by Doc Lew Childre [3,4]. (See also contributions by Rollin McCraty and Glen Rein in this volume). This new phenomenon -- the DNA phantom effect -- was first observed in Moscow at the Russian Academy of Sciences as a surprise effect during experiments measuring the vibrational modes of DNA in solution using a sophisticated and expensive "MALVERN" laser photon correlation spectrometer (LPCS) [5]. Dr. References1.

Male and female brains wired differently, scans reveal | Science Scientists have drawn on nearly 1,000 brain scans to confirm what many had surely concluded long ago: that stark differences exist in the wiring of male and female brains. Maps of neural circuitry showed that on average women's brains were highly connected across the left and right hemispheres, in contrast to men's brains, where the connections were typically stronger between the front and back regions. Ragini Verma, a researcher at the University of Pennsylvania, said the greatest surprise was how much the findings supported old stereotypes, with men's brains apparently wired more for perception and co-ordinated actions, and women's for social skills and memory, making them better equipped for multitasking. "If you look at functional studies, the left of the brain is more for logical thinking, the right of the brain is for more intuitive thinking. So if there's a task that involves doing both of those things, it would seem that women are hardwired to do those better," Verma said.

Data Storage in Crystal Quartz will change Everything! You know how much I LOVE talking about new technology, right? Well, this is one that is going to blow your mind, make an excellent case for the Crystal Movement, and also mop the floor with “limited data storage” forever! There’s a new kind of storage device which many tech companies have been diving into in secret for the past few years, which Hitachi recently came out with a technology they are developing which is essentially a sheet of Quartz Glass, which could potentially save data up to 300 Million Years! If you didn’t know anything about storage devices that we currently have, but anything from records, CD’s, USB sticks, magnetic tape, none of these can even lay a finger on this new, very impressive technology. "The prototype is made of a square of quartz two centimeters wide and two millimeters thick. It houses four layers of dots that are created with a femtosecond laser, which produces extremely short pulses of light. - From the Scientific American Journal - Computerworld

Caltech researchers find Evidence for Nibiru - Ancient UFO Caltech researchers have found evidence of a giant planet tracing a bizarre, highly elongated orbit in the outer solar system. Is this Planet X / Nibiru? The object, which the researchers have nicknamed Planet Nine, has a mass about 10 times that of Earth and orbits about 20 times farther from the sun on average than does Neptune. In fact, it would take this new planet between 10,000 and 20,000 years to make just one full orbit around the sun. At 5,000 times the mass of Pluto is sufficiently large that there should be no debate about whether it is a true planet. Unlike the class of smaller objects now known as dwarf planets, Planet Nine gravitationally dominates its neighborhood of the solar system. You can read the full paper, “Evidence for a Distant Giant Planet in the Solar System”, here. Zecharia Sitchin attributed the creation of the ancient Sumerian culture to the Anunnaki, which he stated was a race of extraterrestrials from a planet beyond Neptune called Nibiru.