A Decade of Discovery. IGBP - IGBP. Marine Biodiversity. What is Biological Diversity or Biodiversity? 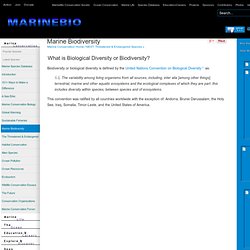 Biodiversity or biological diversity is defined by the United Nations Convention on Biological Diversity as: The variability among living organisms from all sources, including, inter alia [among other things], terrestrial, marine and other aquatic ecosystems and the ecological complexes of which they are part: this includes diversity within species, between species and of ecosystems.

This convention was ratified by all countries worldwide with the exception of: Andorra, Brunei Darussalam, the Holy See, Iraq, Somalia, Timor-Leste, and the United States of America. Welcome to OBIS! Earth system science. Earth system science seeks to integrate various fields of academic study to understand the Earth as a system. 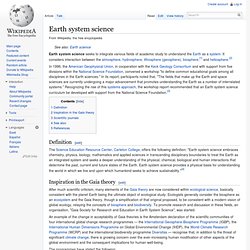 It considers interaction between the atmosphere, hydrosphere, lithosphere (geosphere), biosphere,[1] and heliosphere.[2] In 1996, the American Geophysical Union, in cooperation with the Keck Geology Consortium and with support from five divisions within the National Science Foundation, convened a workshop "to define common educational goals among all disciplines in the Earth sciences. " International Human Dimensions Programme. The International Human Dimensions Programme on Global Environmental Change (IHDP) is a research programme that studies the human and societal aspects of the phenomenon of global change. 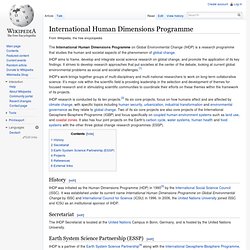 IHDP aims to frame, develop and integrate social science research on global change, and promote the application of its key findings. It strives to develop research approaches that put societies at the center of the debate, looking at current global environmental problems as social and societal challenges.[1] IHDP’s work brings together groups of multi-disciplinary and multi-national researchers to work on long-term collaborative science.

It’s major role within the scientific field is providing leadership in the selection and development of themes for focused research and in stimulating scientific communities to coordinate their efforts on these themes within the framework of its projects. History[edit] Secretariat[edit] Earth OS. = a system orchestrating all the existing free & open ideas so that all aspects of life are served by free, open, P2P tech and services only URL = "This document constituates an early version of EarthOS ("Earth operating system"), which is a system apt for dealing with all natural resources in a sustainable way. 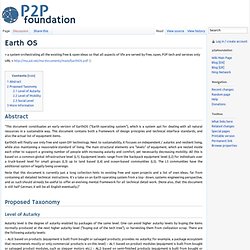 This document contains both a framework of design principles and technical interface standards, and also the actual list of equipment items. EarthOS will finally use only free and open DIY technology. Next to sustainability, it focuses on independent / autarkic and resilient living, while also maintaining a reasonable standard of living.

Note that this document is currently just a long collection hints to existing free and open projects and a list of own ideas, far from containing all detailed technical instructions. World Game. World Game, sometimes called the World Peace Game, is an educational simulation developed by Buckminster Fuller in 1961 to help create solutions to overpopulation and the uneven distribution of global resources. 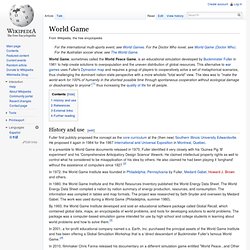 This alternative to war games uses Fuller's Dymaxion map and requires a group of players to cooperatively solve a set of metaphorical scenarios, thus challenging the dominant nation-state perspective with a more wholistic "total world" view. World Game. In the 1960's Buckminster Fuller proposed a “great logistics game” and “world peace game” (later shortened to simply, the “World Game”) that was intended to be a tool that would facilitate a comprehensive, anticipatory, design science approach to the problems of the world. 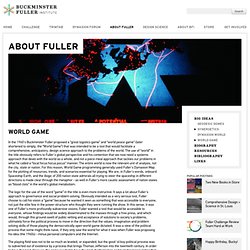 The use of “world” in the title obviously refers to Fuller's global perspective and his contention that we now need a systems approach that deals with the world as a whole, and not a piece meal approach that tackles our problems in what he called a “local focus hocus pocus” manner. The entire world is now the relevant unit of analysis, not the city, state or nation. For this reason, World Game programming generally used Fuller's Dymaxion Map for the plotting of resources, trends, and scenarios essential for playing. 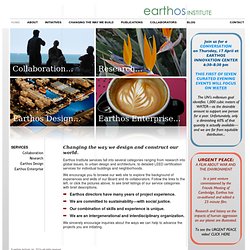 Earthos Institute services fall into several categories ranging from research into global issues, to urban design and architecture, to detailed LEED certification services for individual buildings and neighborhoods. We encourage you to browse our web site to explore the background of experiences and skills of our Board and its collaborators. Follow the links to the left, or click the pictures above, to see brief listings of our service categories with brief descriptions. ➡Earthos directors have many years of project experience. ➡We are committed to sustainability—with social justice. Earth System Governance. Earth System Science. Latest news: International Council for Science — ICSU. Home. Rainbow Charts. Journal of Earth System Science. Welcome — DIVERSITAS.

Start - IHDP. ICES Foundation. Contributing to a fundamental scientific understanding of the Earth as a coupled system, through research and teaching. Earth System Science Computation. Regional Earth System Prediction: Microbes to Man. How the Living Earth Simulator Will Work" The kings of old knew the weight of their decisions. 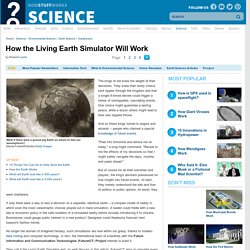 They knew their every choice sent ripples through the kingdom and that a single ill-timed decree could trigger a series of unstoppable, cascading events. One choice might guarantee a lasting peace, while a dozen others might lead to their own toppled throne. Chesapeake Bay Operational Forecast System (CBOFS) Chesapeake Bay Operational Forecast System (CBOFS) Updated on March 13, 2014: CO-OPS is planning to turn off OPeNDAP services on the NOS OFS web pages on April 23, 2014. Please use the THREDDS URL and change your scripts if needed. (Please click on the map pins below to access the time series plots) Chesapeake City Currents Chesapeake City Courthouse Point Town Point Grove Neck Shad Battery Pooles Island Upper Chesapeake Range Baltimore. IPCC - Intergovernmental Panel on Climate Change. Earth Microbiome Project.