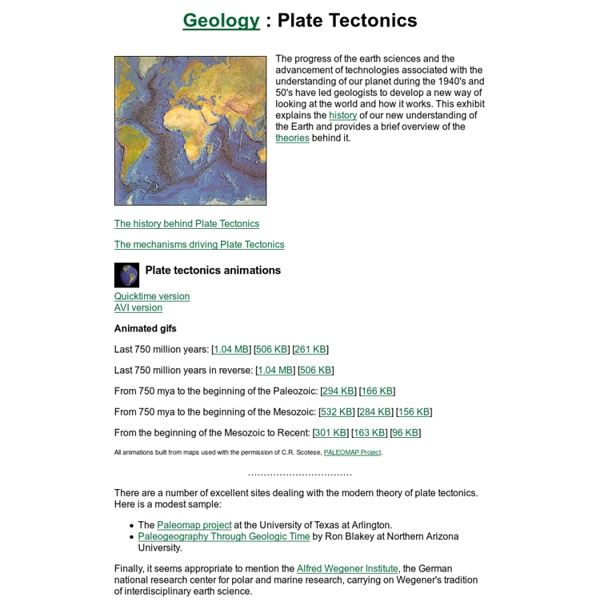 Quicktime versionAVI version Animated gifs Last 750 million years: [1.04 MB] [506 KB] [261 KB] Last 750 million years in reverse: [1.04 MB] [506 KB] From 750 mya to the beginning of the Paleozoic: [294 KB] [166 KB] From 750 mya to the beginning of the Mesozoic: [532 KB] [284 KB] [156 KB] From the beginning of the Mesozoic to Recent: [301 KB] [163 KB] [96 KB] All animations built from maps used with the permission of C.R. There are a number of excellent sites dealing with the modern theory of plate tectonics. The Paleomap project at the University of Texas at Arlington.Paleogeography Through Geologic Time by Ron Blakey at Northern Arizona University. Finally, it seems appropriate to mention the Alfred Wegener Institute, the German national research center for polar and marine research, carrying on Wegener's tradition of interdisciplinary earth science. Sources: S. Related:  lycée

Tectonic Plates The edges of these plates, where they move against each other, are sites of intense geologic activity, such as earthquakes, volcanoes, and mountain building. Plate tectonics is a relatively new theory and it wasn't until the 1960's that Geologists, with the help of ocean surveys, began to understand what goes on beneath our feet. Where is the Evidence for Plate Tectonics? It is hard to imagine that these great big solid slabs of rock could wander around the globe. Scientists needed a clue as to how the continents drifted. Click here for the Scotland story Picture the following in your mind: You have a nine piece jigsaw (now there's a challenge). What do you think will happen to the puzzle? Now let's think back to our plates being created at the mid-ocean ridges, it seems to be a good idea but if this is the only type of plate movement then the world would get bigger and bigger. The floor of the Easter Pacific is moving towards South America at a rate of 9 centimetres per year.

Extreme Science | Science Technology | Earth Science Solar-powered sea slug harnesses stolen plant genes - life - 24 November 2008 Video: Watch a sea slug eat algae to nab some of its chloroplasts, and the genes that keep them functioning It's the ultimate form of solar power: eat a plant, become photosynthetic. Now researchers have found how one animal does just that. Elysia chlorotica is a lurid green sea slug, with a gelatinous leaf-shaped body, that lives along the Atlantic seaboard of the US. Mary Rumpho of the University of Maine, is an expert on E. chlorotica and has now discovered how the sea slug gets this ability: it photosynthesises with genes "stolen" from the algae it eats. She has known for some time that E. chlorotica acquires chloroplasts - the green cellular objects that allow plant cells to convert sunlight into energy - from the algae it eats, and stores them in the cells that line its gut. Young E. chlorotica fed with algae for two weeks, could survive for the rest of their year-long lives without eating, Rumpho found in earlier work. But a mystery remained. Gene 'theft' Human photosynthesis?

Explore, Play, Discover: Websites, Activities & More Search form Search Low-cost, teacher-tested activities for the classroom and the curious. Science of Cooking • Explore the science behind food and cooking with recipes, activities, and Webcasts.PreviousNext Explore, Play, Discover: Websites, Activities, and More Auroras: Paintings in the Sky Far north in the night sky, a faint glow appears on the horizon. Feeling Pressured Feel atmospheric pressure changes by stepping into a garbage bag. Camera Obscura Take the Beat Back Uncover the everyday origins of some extraordinary instruments. The Cold Water Candy Test Science of Baseball What's the science behind a home run? Arctic Seals These unique – and uniquely beautiful – seal species spend their lives amid the sea ice Plant Hybrids If you're a patient gardener, you can grow your own hybrid flowers. 2016 Total Solar Eclipse Telescope View Watch the telescope view of the entire 2016 total solar eclipse in Micronesia. Energy from Death Slinky in Hand Make waves without getting wet. Cheshire Cat Pages explore Connect

Rwanda’s rainforest renewal : National Parks, Africa When choosing Rwanda as a holiday destination, many people are keen to see the country’s rare primates and learn about its dark past. But those who work in the tourism industry are keen to show visitors a new Rwanda. Not one that is dismissive of its history – but one that offers more than museums and gorillas. Related article: Experiences that make time stand still For the last seven years, the Rwanda Development Board (RDB) has been focusing on the rainforest 200km to the west of capital city Kigali in a bid to attract adventurous travellers. Created as a national park in 2004, Nyungwe is full of waterfall treks, colobus monkey spotting and canopy walkways – and thanks to the recently improved road infrastructure from Kigali – is easily accessible. “In the past people would often have stayed in Rwanda for just a few days, perhaps as part of a wider Africa trip,” said Manzi Kayihura, president of the Rwanda Tours and Travel Association.

Lawrence Hall of Science - 24/7 Science How fast does the wind blow? What makes things sticky? Where do insects live and plants grow? So many questions—and so many ways to find answers! Bridge Builders How Fast Is the Wind Gooo! Filling Without Spilling Parachute Drop Crystals Bird Beaks Sticky Situations Oil Spill How Old is Your Penny? Measure Yourself Where Do Plants Grow? Bug Hunt! Afterschool KidzScience AfterSchool KidzScience™ kits are designed specifically for children in grades 3 - 5 in out-of-school settings. Check Out Science Check Out Science makes doing science with your family easy, no scientific expertise necessary. Explore Your World You don't have to trek through a rainforest, blast off for space, or dive to the deep sea to explore your world. Roadside Heritage Roadside Heritage is an informal science educational project with its origins in the stunning landscape of the Eastern Sierra along the 395 scenic byway. Save Sam! Green Milk Save Ratty Virus Worker Nano Puzzle How Small is Small What is an SEM? Mr.

What is matter? Introduction to matter Matter is anything, such as a solid, liquid or gas, that has weight (mass) and occupies space. For anything to occupy space, it must have volume. Take a look at this boy blowing bubbles. The boy's cup, liquid and the air he is blowing is matter. It is because of their individual properties that they are made up of. But what are their individual properties made up of? Good question. In this lesson, we shall look at the behavior and states of matter — Solids, Liquids and Gases, which are known as the three states of matter.

Classification of matter Elements, Compounds, Substances and Mixtures In the study of science, it is very important to know that all solids are not the same, and all liquids, and gases are never the same. In addition to that, it is important to understand why all liquids are not the same, and why some are purer than others, in terms of their chemical make-up or compositions. This is why classification of matter is important. Classification of matter Matter can be classified into two categories: pure substances and mixtures. This classification is based on the internal composition of that matter. Using composition to describe matter is better than using its state, because the internal make-up makes matter unique, and not its phase or state. ) can be vapor, solid or the usual liquid. In a similar vein, classifying matter only according to its color, size, or weight is not enough because two identical objects can be of the same color, but their internal make up may be different.

What is genetics about? Introduction to genetics. Genetics is probably one of the most exciting lessons in biology. At the same time, it can be a bit confusing because sometimes it is difficult to imagine what the bare eyes cannot see. What is genetics? Genetics is the science of studying how living things pass on characteristics (or traits) and its variations in their cell make-up from one generation to the other. Simply, it is the study of how living things inherit features like eye-colour, nose shape, height and even behavior from their parents. Here is a scenario — If a mother with big blue eyes has a baby boy, soon his eyes begin to look so much like his mummy’s. He will probably exhibit similar features of his mum’s eyes. When this happens, the boy probably has inherited some specific genes from his mummy, and the cells in their eyes share some DNA (we will explain this soon). This inheritance can come about in both sexual and asexual reproduction. Genetics is not only important in humans.

Kinds of Energy NOTE: If you want to learn about Energy in terms of Renewable and Non-renewable Energy, please select an option below: What is energy? Look around you. Is anything moving? Look at the sketch below to see an example of things working, moving, or happening... with energy. Energy moves cars along the roads and makes aeroplanes fly. KINDS OF ENERGY With the above explanation in mind, let us learn more. Energy can be (is) stored or transferred from place to place, or object to object in different ways.