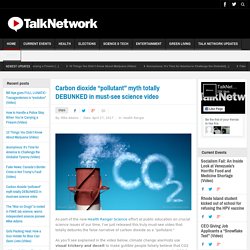 As you’ll see explained in the video below, climate change alarmists use visual trickery and deceit to make gullible people falsely believe that CO2 is rising to unprecedented, alarming levels across our planet. In truth, CO2 is at nearly the lowest point ever recorded in the history of the planet. In fact, using data from the NOAA and even the IPCC, it turns out that CO2 levels were as much as 15 times higher than 400 ppm in the past, and plants across the planet today are starving for CO2, the “molecule of life” for plant life across the planet (including forests, food crops and jungles).

Watch (and share) my full carbon dioxide science presentation below, and help educate the ignorant masses about the truth on carbon dioxide. GAB.ai:GAB.ai/healthranger.

The goal of the day is to highlight the importance of maps and how they contribute to improving our quality of life on a daily basis. Maps have more uses than getting us from point A to point B; they are applied to tracking the spread of diseases and monitoring migration patterns, both producing significant public health and safety benefits. And that’s just to name a couple of examples. Image credit: USGS Maps are also necessary tools for Earth scientists, engineers, and others as they continue to explore above and below the Earth’s surface, improve our understanding of how the Earth works, and determine what causes some natural disasters.

The public safety benefits of geologic maps are vast, from a better understanding of potential for natural hazards to better-informed decisions about how to prepare our cities for potential hazards. Active Earth Awareness: The Silent Subduction Zone. Earth's Interior Isn't Quite What We Thought It Was. Rare earth element. A rare earth element (REE) or rare earth metal (REM), as defined by IUPAC, is one of a set of seventeen chemical elements in the periodic table, specifically the fifteen lanthanides, as well as scandium and yttrium. 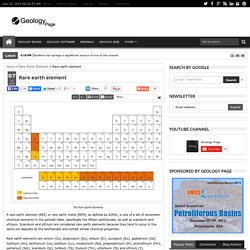 Scandium and yttrium are considered rare earth elements because they tend to occur in the same ore deposits as the lanthanides and exhibit similar chemical properties. Rare earth elements are cerium (Ce), dysprosium (Dy), erbium (Er), europium (Eu), gadolinium (Gd), holmium (Ho), lanthanum (La), lutetium (Lu), neodymium (Nd), praseodymium (Pr), promethium (Pm), samarium (Sm), scandium (Sc), terbium (Tb), thulium (Tm), ytterbium (Yb) and yttrium (Y). Types of volcanic eruptions. During a volcanic eruption, lava, tephra (ash, lapilli, volcanic bombs and blocks), and various gases are expelled from a volcanic vent or fissure. Several types of volcanic eruptions have been distinguished by volcanologists. These are often named after famous volcanoes where that type of behavior has been observed. Some volcanoes may exhibit only one characteristic type of eruption during a period of activity, while others may display an entire sequence of types all in one eruptive series.

There are three different meta types of eruptions. The most well-observed are magmatic eruptions, which involve the decompression of gas within magma that propels it forward. Within these wide-defining eruptive types are several subtypes. Earth's core contains 90 percent of Earth's sulfur, new research shows. So perhaps there is some truth in the old legends of the underworld reeking of brimstone (or sulphur, as it is now called)? 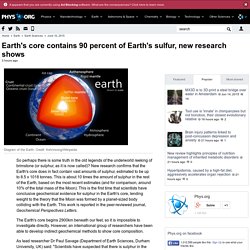 New research confirms that the Earth's core does in fact contain vast amounts of sulphur, estimated to be up to 8.5 x 1018 tonnes. This is about 10 times the amount of sulphur in the rest of the Earth, based on the most recent estimates (and for comparison, around 10% of the total mass of the Moon). This is the first time that scientists have conclusive geochemical evidence for sulphur in the Earth's core, lending weight to the theory that the Moon was formed by a planet-sized body colliding with the Earth. This work is reported in the peer-reviewed journal, Geochemical Perspectives Letters. Clues to the Earth's ancient core. Old rocks hold on to their secrets. 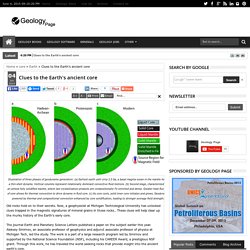 Now, a geophysicist at Michigan Technological University has unlocked clues trapped in the magnetic signatures of mineral grains in those rocks.. These clues will help clear up the murky history of the Earth's early core. The journal Earth and Planetary Science Letters published a paper on the subject earlier this year. Could Pulses in Earth's Magnetic Field Forecast Earthquakes? In the days leading up to some recent moderate-sized earthquakes, instruments nearby have picked up brief low-frequency pulses in Earth’s magnetic field. 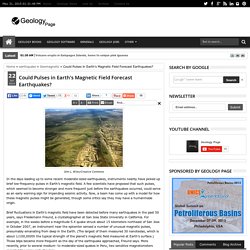 A few scientists have proposed that such pulses, which seemed to become stronger and more frequent just before the earthquakes occurred, could serve as an early warning sign for impending seismic activity. Now, a team has come up with a model for how these magnetic pulses might be generated, though some critics say they may have a humanmade origin. Brief fluctuations in Earth’s magnetic field have been detected before many earthquakes in the past 50 years, says Friedemann Freund, a crystallographer at San Jose State University in California.

For example, in the weeks before a magnitude-5.4 quake struck about 15 kilometers northeast of San Jose in October 2007, an instrument near the epicenter sensed a number of unusual magnetic pulses, presumably emanating from deep in the Earth. Geologic Time Scale. New study explains source of Earth’s mysterious ringing. By Nanci Bompey Scientists have come up with an explanation of why the Earth rings like a bell.

It’s long been known that earthquakes can cause the Earth to oscillate, or ring, for days or months, but in the late 1990s, seismologists discovered that the planet constantly vibrates at very low frequencies, even when there are no earthquakes. Humanity has exceeded four of nine “planetary boundaries” An international team of researchers says climate change, the loss of biosphere integrity, land-system change and altered biogeochemical cycles like phosphorus and nitrogen runoff have all passed beyond levels that put humanity in a “safe operating space.” 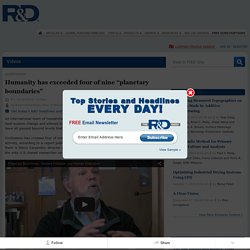 Civilization has crossed four of nine so-called planetary boundaries as the result of human activity, according to a report published in Science by the 18-member research team. Among them is Steve Carpenter, director of the Univ. of Wisconsin-Madison Center for Limnology and the only U.S. -based researcher on the study. It should be a wake-up call to policymakers that “we’re running up to and beyond the biophysical boundaries that enable human civilization as we know it to exist,” says Carpenter. For the last 11,700 years until roughly 100 years ago, Earth had been in a “remarkably stable state,” says Carpenter. Journeys to the Center of the Earth. A Modest Proposal On a warm summer morning, I met with Stevenson at his Caltech office in Pasadena. 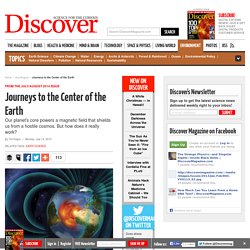 He was dressed for the weather, wearing shorts, sandals and a short-sleeved shirt. We talked for a while about how the surfaces of Mars and other planets, despite being tens or hundreds of millions of miles away, are far more accessible than Earth’s core. “Of course, the universe above the Earth is mostly transparent! So you have the wonderful opportunity to use photons to tell you about the rest of the universe,” he says. Earth Looks Like A Living Creature In This Amazing NASA Video. We’ve all seen images of extreme weather from space. 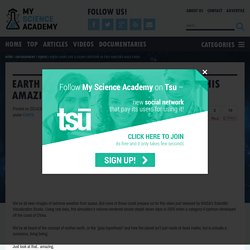 But none of those could prepare us for this video just released by NASA’s Scientific Visualization Studio. Using real data, this simulation’s volume-rendered clouds depict seven days in 2005 when a category-4 typhoon developed off the coast of China. We’ve all heard of the concept of mother earth, or the “gaia hypothesis” and how the planet isn’t just made of dead matter, but is actually a conscious, living being. Just look at that.. amazing. Contrary to the common belief that the Earth is simply a dense planet whose only function is a resource for its inhabitants, our planet is in fact a breathing, living organism.

NASA's Van Allen Probes spot an impenetrable barrier in space. An Ocean Is Hidden Inside Earth, And We'll Take You There To See It. Earth's interior is way more complicated than you probably thought -- turns out it has molten metal and hidden oceans, and parts of it are hotter than the surface of the sun. Check out the video above and/or read the transcript below. And leave your thoughts in the comments. Talk nerdy to me! JACQUELINE HOWARD: Hey everyone. Jacqueline Howard here. First stop, Earth’s crust--the solid outer layer where we live. Now we’re about 50 miles below the surface, at the uppermost region of the mantle. The mantle is also where molten rock known as magma can form before it flows upward during volcanic eruptions--at which point the magma becomes lava. Here we are, 1,800 miles down, at the Earth’s outer core, which runs all the way down to around 3,000 miles.