Make Your Own Game with RPG Maker 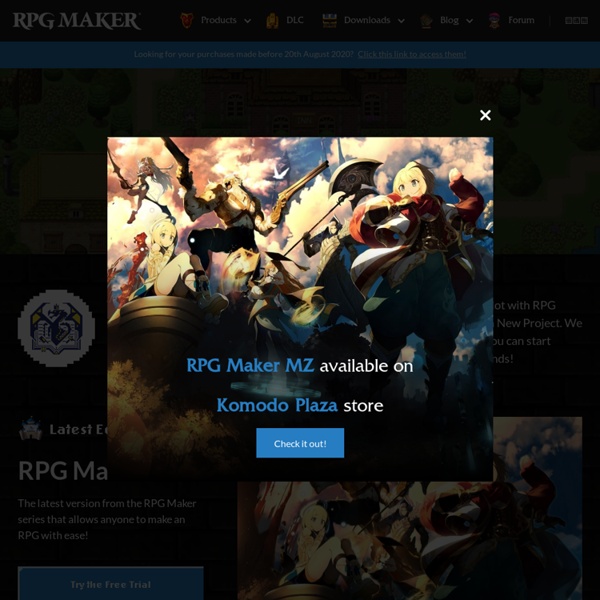 Scratch Offline Editor You can install the Scratch 2.0 editor to work on projects without an internet connection. This version will work on Mac, Windows, and some versions of Linux (32 bit). Note for Mac Users: the latest version of Scratch 2.0 Offline requires Adobe Air 20. To upgrade to Adobe Air 20 manually, go here. MicroWorlds EX We think our products are great! But don't just take our word for it, here's what teachers have to say... "I was first introduced to Logo about 20 years ago at the University of Nebraska. About 10 years ago when the opportunity came up to teach a 6-week exploratory class for seventh graders, I knew right away that I wanted to use MicroWorlds! Now that MicroWorlds EX is out, the students are not only experiencing computer programming at their level of expertise, but I firmly believe that MicroWorlds builds a strong foundation towards a future computer science career." Tom J.

Coding Boot Camps Fast Track Females into Innovation by Natalie Shoemaker The gender gap is Silicon Valley, where fewer than one in five technical employees are women, is no longer a well-kept secret. But we can't just blame the computing industry for its dearth of female workers. The problem starts in school. As of 2012, the National Science Foundation reported only 18 percent of computer science degrees were obtained by women. Free Version The free & pro versions are the same download… the license key code activates the additional pro features. You can get the program in any of several different ways. The software is written in Java, but we now native build it for Windows 7+ and Mac OSX 10.6+. An .exe setup file for Windows that DOES NOT REQUIRE JAVA. Download this, unzip it and click to run it. We’re still testing this, so please send feedback to support at inkwellideas dot com.

Unite Unite is your opportunity to learn how to get the most out of the Unity engine, to meet up with Unity engineers and fellow professionals and to get the full lowdown on our development roadmap. Empowering the community with more knowledge At Unite, you’ll learn from our engineers on how to mine Unity tools for more power and flexibility in your work. Get a sneak peek at upcoming product features and new services.

Download Microsoft XNA Game Studio 4.0 from Official Microsoft Download Center <a id="b7777d05-f9ee-bedd-c9b9-9572b26f11d1" target="_self" class="mscom-link download-button dl" href="confirmation.aspx?id=23714" bi:track="false"><span class="loc" locid="46b21a80-a483-c4a8-33c6-eb40c48bcd9d" srcid="46b21a80-a483-c4a8-33c6-eb40c48bcd9d">Download</span></a> Microsoft XNA Game Studio 4.0 makes it easier than ever to create great video games for Windows-based PCs, Xbox 360 consoles, and Windows Phone 9 great free activities for Hour of Code Annual Hour of Code, during Computer Science Education Week, encourages educators and students to participate in one hour of coding Computer science skills have enjoyed more time in the spotlight as educators, policymakers and celebrities tout the importance of coding and programming skills. This year’s Hour of Code reinforces computer science’s growing importance. The Hour of Code asks students, teachers, and anyone who is interested to devote at least one hour to coding during Computer Science Education Week (Dec. 7-11). Participants can choose from guided tutorials or can join in scheduled Hour of Code activities that education or community groups have organized. According to Code.org, the group behind the Hour of Code, there will be 1 million more computer science jobs than students by 2020, based on Bureau of Labor Statistics projections.

About An overview of Kodu. (Click to play) Kodu lets kids create games on the PC and Xbox via a simple visual programming language. Teaching Kids to Code Every era demands—and rewards—different skills. In different times and different places, we have taught our children to grow vegetables, build a house, forge a sword or blow a delicate glass, bake bread, create a soufflé, write a story or shoot hoops. Now we are teaching them to code. We are teaching them to code, however, not so much as an end in itself but because our world has morphed: so many of the things we once did with elements such as fire and iron, or tools such as pencil and paper, are now wrought in code.