The Answer to all our energy "problems": Cold Fusion. How Cold Fusion Works. ISIS Report 23/10/07 Many ways for atomic nuclei to come close coherently and fuse together in condensed matter. Dr. Mae-Wan Ho A fully referenced version of this article is posted on ISIS members’ website. Details here An electronic version of this report, or any other ISIS report, with full references, can be sent to you via e-mail for a donation of £3.50. Cold fusion with ease The surprising thing about cold fusion is how easily it could be made to happen, and in many different forms [1, 2] (see From Cold Fusion to Condensed Matter Nuclear Science and Transmutation, the Alchemists’ Dream Come True? The key to cold fusion is that it happens in condensed matter. First of all, the hydrogen or deuterium nuclei are trapped in the host lattice, and hence much closer together than they would otherwise be in the gas phase. 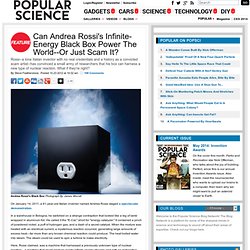 In a warehouse in Bologna, he switched on a strange contraption that looked like a leg of lamb wrapped in aluminum foil. He called it the "E-Cat," short for "energy catalyzer. " It contained a pinch of powdered nickel, a puff of hydrogen gas, and a dash of a secret catalyst. When the mixture was heated with an electrical current, a mysterious reaction occurred, generating large amounts of excess heat—far more than any known chemical reaction could produce. The heat boiled water into steam. Here, Rossi claimed, was a machine that harnessed a previously unknown type of nuclear reaction—a machine that could produce nearly infinite energy cheaply and with no radioactive by-products.

A handpicked audience of 40 journalists and scientists watched Rossi's E-Cat gurgle steam for an hour. Italian Scientists Claim (Dubious) Cold Fusion Breakthrough. Good science is always rooted in good data, but the most entertaining science is the stuff that transcends the need for data by rooting itself fantastical claims and a rejection of the idea that data is even necessary. 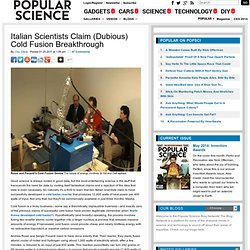 So naturally it's a thrill to learn that two Italian scientists claim to have successfully developed a cold fusion reactor that produces 12,400 watts of heat power per 400 watts of input. Not only that, but they'll be commercially available in just three months. Maybe. Italian scientists claim to have demonstrated cold fusion (w/ Video) (PhysOrg.com) -- Few areas of science are more controversial than cold fusion, the hypothetical near-room-temperature reaction in which two smaller nuclei join together to form a single larger nucleus while releasing large amounts of energy. 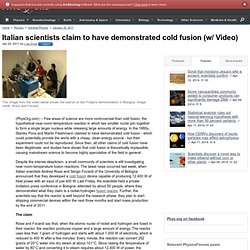 In the 1980s, Stanley Pons and Martin Fleishmann claimed to have demonstrated cold fusion - which could potentially provide the world with a cheap, clean energy source - but their experiment could not be reproduced. Cold Fusion, or Cold Shoulder? For some, one of the greatest concerns of the present day involves the hope for a vast overhaul of the way humans use and obtain energy. 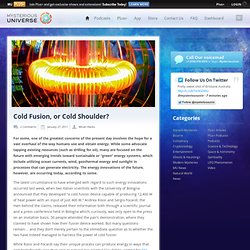 While some advocate tapping existing resources (such as drilling for oil), many are focused on the future with emerging trends toward sustainable or “green” energy systems, which include utilizing ocean currents, wind, geothermal energy and sunlight in processes that can generate electricity. The energy innovations of the future, however, are occurring today, according to some. The latest circumstance to have emerged with regard to such energy innovations occurred last week, when two Italian scientists with the University of Bologna announced that they developed “a cold fusion device capable of producing 12,400 W of heat power with an input of just 400 W.” “Further,” Dillow continued, “they say they can’t account for how the cold fusion is triggered, fostering deep skepticism from others in the scientific community.” Cold Fusion Plasma 9.

Fusion Energy Will Play An Increasing Importance In Global Energy. Currently, the European Union obtains most of it energy from outside the union, the energy which comprises of oil and gas is estimated to be more than 50% of the country’s energy supply. 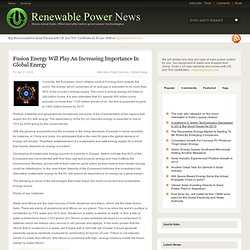 The union’s annual energy bill totals to 240 billion Euros. It is also estimated that EU spends 500 billion euros annually on more than 1725 million tonnes of oil. Yet, this is projected to grow to 1900 million tonnes by 2015. Homage to the fusioneer: 60 Years of Fusion research in 5 minutes. Polywell Fusion in 6 Steps :-) LENR. Scientists announce breakthrough in quest for fusion power. In a perfect example of beating swords into plowshares, a team of scientists at the Lawrence Livermore National Laboratory's (LLNL) National Ignition Facility (NIF) in California reached a milestone in the quest for practical fusion power using a process designed for the development and testing of nuclear weapons. 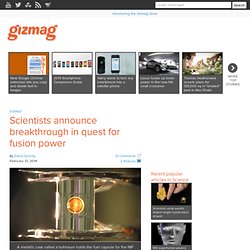 The announcement in the February 12 issue of Nature claims that the team used the world’s most powerful laser barrage to produce a controlled fusion reaction where more energy was extracted from the fuel than was put into it. If there is an ultimate engineering dream, then nuclear fusion is about as close as close as one can get. By literally harnessing the power of the stars, it holds the promise of what is, for all practical purposes, unlimited clean energy.