DIY Hand Sanitizer for Winter. What Is the Best Disinfectant for Surfaces? Flu Vaccines Failing Seniors. Ever since the U.S. 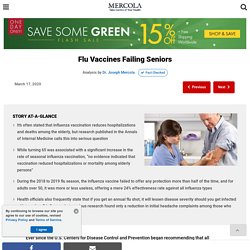 Centers for Disease Control and Prevention began recommending that all Americans 6 months of age and older get an annual flu shot, it’s been touted as the best method of preventing influenza. While it’s true that influenza is a highly infectious airborne disease, controversy exists over the use of influenza vaccines, commonly known as flu shots, for its prevention, and this is particularly true for high-risk groups like seniors.

For starters, more than 80% of the respiratory influenza-like illness infections that occur during flu season are not actually caused by type A or type B influenza.1 A flu shot, therefore, will not prevent the vast majority of respiratory infections caused by bacteria and other types of viruses during the flu season. Further, there are hundreds of influenza viruses, and they’re constantly changing, which means each year health officials must make an educated guess as to which strains are most likely to circulate in the upcoming flu season. Effectively Treat Your Sore Throat - Naturally. The most common reason you may experience a sore throat is a viral infection, such as a cold or flu, which affects the pharyngeal area, or back of your throat. 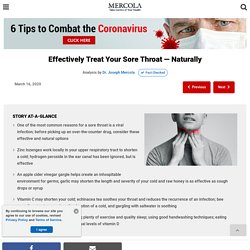 The Guardian characterizes the common cold as having1 “the twin distinction of being both the world’s most widespread infectious disease and one of the most elusive.” Both the cold and flu can cause a sore throat, so it's helpful to know the difference. Both are viral illnesses but are caused by two different types of viruses. Study: Vitamin D Is More Effective Than Flu Vaccine. By Dr. 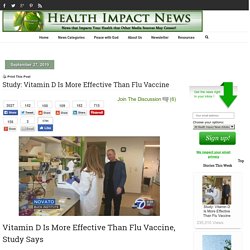 Mercola Conventional health authorities claim getting a flu shot each year is the best way to ward off influenza. But where’s the actual science backing up that claim? If you’ve repeatedly fallen for this annual propaganda campaign, you may be surprised to find the medical literature suggests vitamin D may actually be a FAR more effective strategy, and the evidence for this goes back at least a decade. Handwashing Is the No. 1 Way to Prevent of Contagious Disease. Flu Shot Fails to Protect Seniors and Increases Miscarriages. Flu season is creeping up on us again and there are widespread calls to get your annual flu shot, despite the fact that, year after year, this strategy turns out to have an abysmal rate of effectiveness across the board. 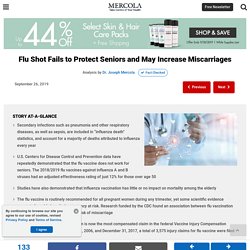 One group that consistently turns out to draw the short end of the stick when it comes to influenza vaccine failures is the elderly. U.S. Centers for Disease Control and Prevention (CDC) data have repeatedly demonstrated that the flu vaccine does not work for seniors. Pregnant women are another group that should carefully evaluate the risks and failures of influenza vaccine.

The CDC recommends routine flu shots for women during any trimester in every pregnancy, but some scientific evidence suggests it could place their pregnancies at risk. I've written many articles questioning the scientific basis for routine influenza vaccination in general. Allergies, Flu or a Cold? How to Tell Which You've Got. April showers bring spring flowers — as well as sniffles, sneezes and other uncomfortable symptoms for the millions of Americans who suffer from seasonal allergies. 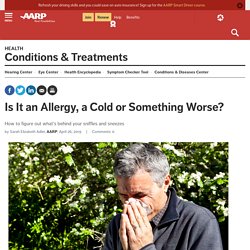 But with cold and flu viruses still circulating, how can you be sure what's causing your respiratory symptoms? Here are a few clues. The nose knows A stuffy, runny nose is common for both cold and allergies (not so much for the flu). If your drainage is clear, says Janna Tuck, an allergist and spokesperson for the American College of Allergy, Asthma & Immunology, that may be a sign of allergies, rather than a cold, which tends to produce greener hues. Eyes. Mix Bananas, Water, And Honey Together And Your Bronchitis And Cough Will Disappear. Influenza Vaccine Industry Is in Full Swing. Special Alert: The Alarming Reason Some People Die From the Flu. By Dr. 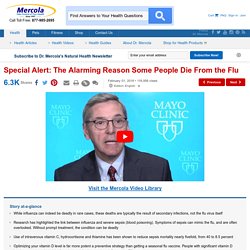 Mercola According to the Centers for Disease Control and Prevention (CDC), the 2017-2018 flu season appears particularly virulent. Influenza activity increased significantly in December, with influenza A(H3N2) viruses predominating, and in a December 27 notice, the agency noted that “In the past, A(H3N2) virus-predominant influenza seasons have been associated with more hospitalizations and deaths in persons aged 65 years and older and young children …”1 While influenza can indeed be deadly in rare cases, what most health experts fail to tell you is that these deaths are typically the result of secondary infections, not the flu virus itself. Importantly, research has highlighted the link between influenza and severe sepsis — a progressive disease process initiated by an aggressive, dysfunctional immune response to an infection in the bloodstream (which is why it's sometimes referred to as blood poisoning). How Influenza May Cause Lethal Sepsis Signs and Symptoms of Sepsis.

Quercetin Lowers Your Risk for Viral Illness. By Dr. 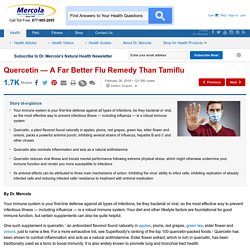 Mercola Your immune system is your first-line defense against all types of infections, be they bacterial or viral, so the most effective way to prevent infectious illness — including influenza — is a robust immune system. Your diet and other lifestyle factors are foundational for good immune function, but certain supplements can also be quite helpful. One such supplement is quercetin,1 an antioxidant flavonol found naturally in apples, plums, red grapes, green tea, elder flower and onions, just to name a few. For a more exhaustive list, see Superfoodly's ranking of the top 100 quercetin-packed foods.2 Quercetin has been shown to combat inflammation and acts as a natural antihistamine. Cold & Flu Kit – Spark Naturals Blog. This year the Flu is spreading like crazy! 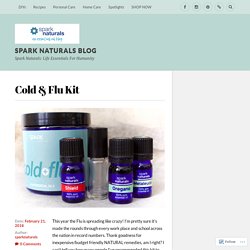 I’m pretty sure it’s made the rounds through every work place and school across the nation in record numbers. Thank goodness for inexpensive/budget friendly NATURAL remedies, am I right? Top Tips to Boost Your Immunity. By Dr. 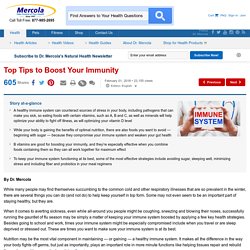 Mercola. Special Alert: The Alarming Reason Some People Die From the Flu. Kick the Cough – Spark Naturals Blog. I don’t know about you, but lately it seems like everyone is sick-the kids, the neighbors, school class, coworkers…everyone. 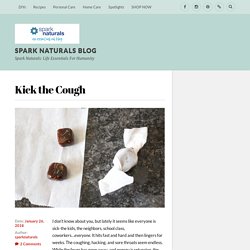 It hits fast and hard and then lingers for weeks. The coughing, hacking, and sore throats seem endless. Stay Well This Winter with Natural Immune Boosters - Health and Wellness - Mother Earth Living. For most of us, the standard week is hectic. From back-to-back meetings and household chores to social obligations and shuttling kids to activities (not to mention making time to exercise, eat well and spend time with our significant others and friends), many of us seem to have never-ending to-do lists. With these busy schedules, a bout of the common cold or flu can totally throw us off track. But ironically, the best way to preserve our health and maintain our on-the-go lifestyles is to give ourselves the time we need to slow down, treat our bodies right, and get the nutrition and rest we need.

By eating a wide array of antioxidant-rich foods, boosting our resistance with powerhouse herbs, and getting adequate sleep and relaxation, we can remain healthy, even through cold and flu season. An Irish cure - medicinal hot whiskey recipe. Hot whiskey! Not an actual solution but you'll finally get some sleep and feel marginally better! iStock A dram of your finest Irish whiskey, cloves, honey / sugar and lemon – everything you need for a good night’s sleep, to keep the chill off your bones and ward off that winter cold. Turns out that the science behind the lovely warming drink is on the side of the Irish – a hot whiskey really is medicinal. 2017-2018 Flu Vaccine Update. By Dr. Mercola It's that time again. Flu season. And with it, a constant barrage of reminders to get your annual flu shot.

Interestingly enough, what you're being told about the influenza vaccine's effectiveness and the reality are two very different stories. Johns Hopkins Researcher Releases Shocking Report On Flu Vaccines. In 2015, a whole new slew of flu vaccines found themselves getting approved by the Federal Drug Administration. This isn’t an uncommon practice; most flu vaccines pass inspection every year. It’s well known advice that has been passed down from doctor to patient that the flu vaccine is something that we all should get, but it has been quickly surfacing that what’s in the vaccines–especially those from 2015 and after–might actually be more damaging then simply rolling the dice on getting the flu. The ingredient that is getting the most flack is called an adjuvant. The particular one involved is called Squalene, and it has been linked to auto-immune disease side effects. In fact, it may have been used during chemical attacks in the Gulf War.

While it may be a contested subject, it remains that we aren’t really sure what’s going into these vaccines we’re being convinced should be used. Aromatherapy Recipes: How to Make an Aromatherapy Inhaler. Vitamin C-Rich Foods That Fight the Common Cold. By Dr. Mercola The common cold is the most common infectious disease in the US and many other areas of the world. Cold symptoms are triggered by hundreds of different viruses — not bacteria — and infection is typically spread by hand-to-hand contact between people, or by touching objects that harbor the pathogens.Since colds are viral in nature, antibiotics are completely useless and should be avoided, unless your physician diagnoses a serious secondary bacterial infection.

Using antibiotics when no bacterial pathogen is present simply contributes to the problem of antibiotic-resistant disease. The key to preventing colds and recovering from them quickly is to maintain a strong immune system, which includes: optimizing your diet, avoiding sugar, optimizing your vitamin D level, getting enough sleep and exercise, managing your stress, and practicing good hand washing technique.Just being exposed to a cold virus does not automatically mean you’ll catch a cold.

How To Make A Steam Inhaler Jar To Beat Congestion. Vitamin D Is More Effective Than Flu Vaccine. The Secret to Staying Healthy: Get The Lymphatic System Moving! - David Avocado Wolfe. [tps_footer][/tps_footer] The lymphatic system is not well known, but a critical part of the body — you have twice as much lymph fluid as blood!

It is a network of tissues and organs that rid the body of toxins, waste, and other unwanted materials; it is part of your natural sewage treatment system. FLU-Sha-Ka-La-Ka! – Spark Naturals Blog. How To Make Your Own "Flu Shot" Using Essential Oils. Stop flu symptoms with these great home remedies. New flu vaccine contains Gulf war syndrome adjuvant. These common ingredients and 15 minutes is all you need to kill a sinus infection :The Hearty Soul. This post was originally published on My Health Maven. The flu shot is loaded with toxins that cause disease. (NaturalHealth365) Spurred on by the relentless urging of government health authorities, over half of the U.S. population currently gets a flu shot.

Yet when it comes to actually protecting citizens from influenza, studies have emerged demonstrating that the vaccine may very well be ineffective – as well as offering a load of neurotoxins. This is The Most Powerful Natural Antibiotic Ever – Kills Any Infections in The Body. The basic formula of this powerful tonic dates back to medieval Europe, that is, from the era when people suffered from all sorts of diseases and epidemics. Lack of Sleep Can Quadruple Your Risk of Catching a Cold. By Dr. Flu Shot Benefits - Flu Vaccine May Reduce Risk of Heart Attack- AARP. The flu vaccine can also reduce the risk of heart attack by nearly 30 percent, says a new study published in the British journal Heart. Natural Sore Throat Remedy: Make a Throat Cream - The Aromahead Blog. Flu Vaccine: Another Year of Dangerous CDC Lies.