History of the Atomic Age 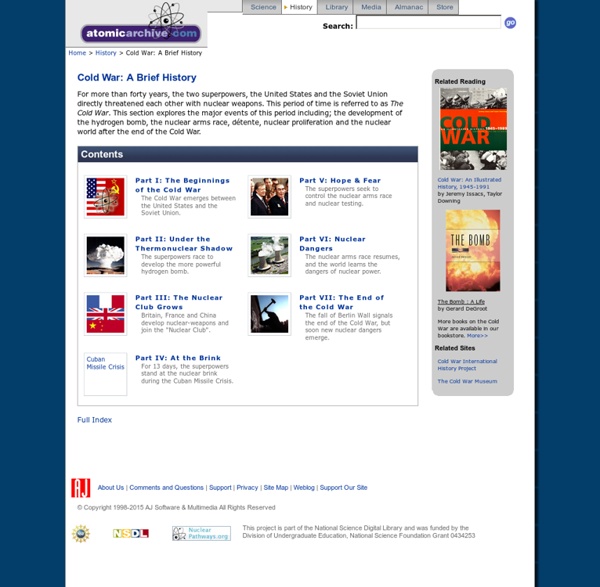 Post World War home | 6th-15th centuries | 16-17th centuries | 18-19th centuries | 1901 to World War II Victors, Independence Movements and Cold War The United Nations – the founding, Roosevelt's hopes denied and the veto How pop culture helped win the Cold War The Bolshoi Ballet's Galina Ulanova in London in October 1956 receiving a bouquet of flowers from the Director-General of the BBC For many people, as our series shows, the great paradox of the Cold War was that it was at once utterly terrifying and strangely glamorous. One example tells a wider story. Almost exactly 50 years ago, the dust was still settling after the high-stakes brinkmanship of the Cuban Missile Crisis, when the world had come closer than ever before to nuclear annihilation.

Pop in the age of the atomic bomb On 11 October 1962, the Beatles' first single for EMI, Love Me Do, entered the UK charts. Four days later, the Cuban missile crisis began, when a US reconnaissance plane spotted Soviet missile bases in Cuba. In the days that followed, the world teetered on the brink of nuclear war. The Great Depression - Facts & Summary Among the programs and institutions of the New Deal that aided in recovery from the Great Depression were the Tennessee Valley Authority (TVA), which built dams and hydroelectric projects to control flooding and provide electric power to the impoverished Tennessee Valley region of the South, and the Works Project Administration (WPA), a permanent jobs program that employed 8.5 million people from 1935 to 1943. After showing early signs of recovery beginning in the spring of 1933, the economy continued to improve throughout the next three years, during which real GDP (adjusted for inflation) grew at an average rate of 9 percent per year. A sharp recession hit in 1937, caused in part by the Federal Reserve’s decision to increase its requirements for money in reserve. Though the economy began improving again in 1938, this second severe contraction reversed many of the gains in production and employment and prolonged the effects of the Great Depression through the end of the decade.

Civil Rights Movement - Black History Severe government repression, the assassinations of Malcolm X and Martin Luther King, and the intense infighting within the black militant community caused a decline in protest activity after the 1960s. The African-American freedom struggle nevertheless left a permanent mark on American society. Overt forms of racial discrimination and government-supported segregation of public facilities came to an end, although de facto, as opposed to de jure, segregation persisted in northern as well as southern public school systems and in other areas of American society. In the South, antiblack violence declined. Black candidates were elected to political offices in communities where blacks had once been barred from voting, and many of the leaders or organizations that came into existence during the 1950s and 1960s remained active in southern politics. Southern colleges and universities that once excluded blacks began to recruit them.