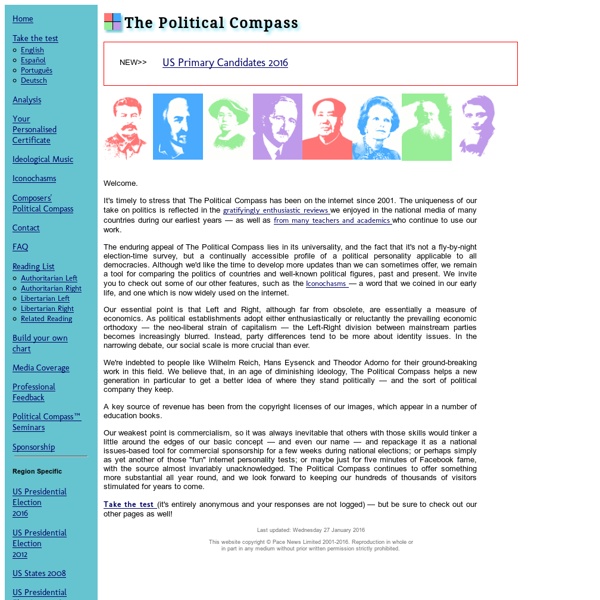 Español There's abundant evidence for the need of it. The old one-dimensional categories of 'right' and 'left', established for the seating arrangement of the French National Assembly of 1789, are overly simplistic for today's complex political landscape. For example, who are the 'conservatives' in today's Russia? Are they the unreconstructed Stalinists, or the reformers who have adopted the right-wing views of conservatives like Margaret Thatcher ? On the standard left-right scale, how do you distinguish leftists like Stalin and Gandhi?

10 Instant Emotional Fitness Tools When things get out of control and you momentarily lose your emotional balance, there are any number of little things you can do to regain it. Here are ten tools to help get you started. 1. World's Smallest Political Quiz The RED DOT on the Chart shows where you fit on the political map. Your PERSONAL issues Score is 0% Your ECONOMICS issues Score is 0% This quiz has been taken 21,292,981 times According to your answers, the political group that agrees with you most is... Rapture Stats Section 3: War, Terrorism and Global Trends The public sees the next 40 years as a time of violent conflict, both globally and in the United States. Fully 58% see another world war as definite or probable over the next 40 years. Nearly as many (53%) expect the United States to face a terrorist attack with nuclear weapons.

Mutualism (economic theory) Mutualism is an economic theory and anarchist school of thought that advocates a society where each person might possess a means of production, either individually or collectively, with trade representing equivalent amounts of labor in the free market.[1] Integral to the scheme was the establishment of a mutual-credit bank that would lend to producers at a minimal interest rate, just high enough to cover administration.[2] Mutualism is based on a labor theory of value that holds that when labor or its product is sold, in exchange, it ought to receive goods or services embodying "the amount of labor necessary to produce an article of exactly similar and equal utility".[3] Mutualism originated from the writings of philosopher Pierre-Joseph Proudhon. Mutualists have distinguished mutualism from state socialism, and do not advocate state control over the means of production. Mutualism, as a term, has seen a variety of related uses.

Why Your Vision Must Be Grounded in Reality Whether you realize it or not, you're on a path. You can look back and see exactly how you got to where you stand today. The path ahead is far more nebulous, of course, but it's still a path. Your actions and decisions help to define it, as do all sorts of factors both in and out of your control. If you think of your path as a physical entity, you can easily see that it has certain properties.

Political Spectrum Quiz - Your Political Label Discover your place on the political spectrum! This quiz will let you know where you fall on social liberties, economics, foreign policy-- even the culture war. In truth, this isn't a quiz so much as a set of statements that you must agree or disagree with. Based on your responses we will place you on a graph--also termed a political compass--that separates social liberties from economic opinion.