John le Carré and the Most Interesting Author Interview You Will Ever See. In 1965, John le Carré was a breakout author with a semi-secretive past and some really complex thoughts about espionage. 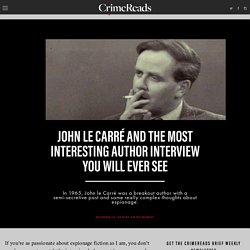 If you’re as passionate about espionage fiction as I am, you don’t need a reason to watch the interview below, a 1965 appearance by John le Carré (David John Moore Cornwell) on the BBC talk show, Intimations. But just in case, here’s the first reason I’ll push on you: it’s just so strange. Strange, deceptive, insightful and utterly fascinating. Intimations was a BBC talk show that ran for eleven episodes between 1965 and 1966. It was hosted by Malcolm Muggeridge, an interesting figure in his own right, a longtime British satirist and contrarian who was at one time a prominent communist, until he became a prominent anti-communist, then later a foe of sexual liberation, Monty Python, and a slew of other cultural touchstones. 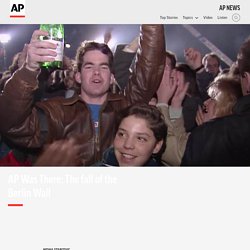 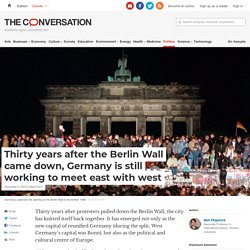 It has emerged not only as the new capital of reunified Germany (during the split, West Germany’s capital was Bonn), but also as the political and cultural centre of Europe. Old eastern suburbs like Prenzlauer Berg have become some of the hottest addresses in Germany. Icecream-eating crowds flock to the stirring monument to the Soviet war dead in Treptower Park, while tourists patiently wait in line to pose for photos with giant statues of Marx and Engels in the shadow of the old East German TV tower. Read more: World politics explainer: The fall of the Berlin Wall Even the east’s iconic hat-wearing Ampelmännchen (traffic light figure) has managed to colonise the west. Policing the Berlin Wall: the ghostly photos taken by the Stasi's hidden cameras. When the Berlin Wall divided Germany from 1961 to 1989, East Germany’s Ministry for State Security – commonly known as the Stasi – undertook mass surveillance of German Democratic Republic citizens. 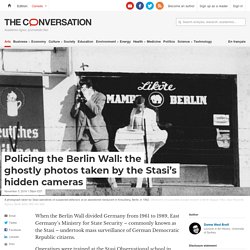 Operatives were trained at the Stasi Observational school in photography, trailing suspects, and dressing in disguise. Surveillance occurred through the collection of documents, audio, video, human odours – and around two million photographs now held in the Stasi archive. In order to take covert photographs, cameras were designed specifically to be hidden in flowerpots, pens, jackets, and bags. Cameras were even invented so small they could be sewn with the lens behind a buttonhole, the shutter release kept in a pocket.

Experience the Collection. People from nearly every country share information with CIA, and new individuals contact us daily. 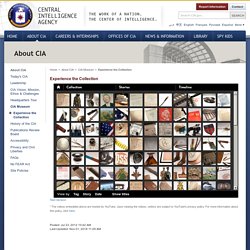 If you have information you think might interest CIA due to our foreign intelligence collection mission, there are many ways to reach us. If you know of an imminent threat to a location inside the U.S., immediately contact your local law enforcement or FBI Field Office. For threats outside the U.S., contact CIA or go to a U.S. Embassy or Consulate and ask for the information to be passed to a U.S. official.

Please know, CIA does not engage in law enforcement. In addition to the options below, individuals contact CIA in a variety of creative ways. History of the Cold War (in One Take) Family Fallout Shelter. Description The family fallout shelter represents the public policy assumptions of the atomic age, namely, that with enough preparation, the American family and with it the nation's social and political fabric would survive a nuclear attack. 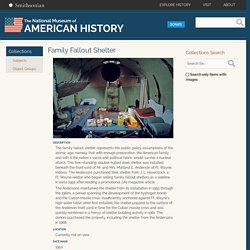 This free-standing, double-hulled steel shelter was installed beneath the front yard of Mr. and Mrs. Murland E. Anderson of Ft. Wayne, Indiana. Fast Attacks & Boomers: Submarines in the Cold War. Exhibition. Pinterest.com. Historical Documents and Reports. Korea. The Korean War Korea had been occupied by Japan for 35 years prior to the end of WWII. 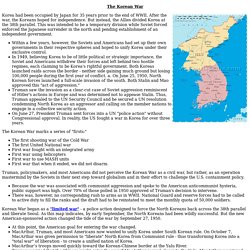 After the war, the Koreans hoped for independence. But instead, the Allies divided Korea at the 38th parallel. This was intended to be a temporary division while Soviet forced enforced the Japanese surrender in the north and pending establishment of an independent government. Within a few years, however, the Soviets and Americans had set up their own governments in their respective spheres and hoped to unify Korea under their exclusive control. Map - Chinese Civil War. Internet History Sourcebooks. Home | Ancient History Sourcebook | Medieval Sourcebook | Modern History Sourcebook | Byzantine Studies Page Other History Sourcebooks: African | East Asian | Global | Indian | Islamic | Jewish | Lesbian and Gay | Science | Women's. 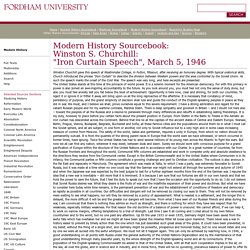 File:Map of Warsaw Pact countries.png. History of the National Security Council 1947-1997. Summary Since the end of World War II, each administration has sought to develop and perfect a reliable set of executive institutions to manage national security policy. 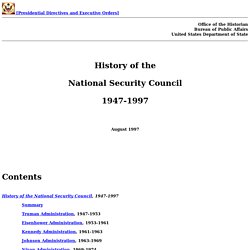 Each President has tried to avoid the problems and deficiencies of his predecessors' efforts and install a policy-making and coordination system that reflected his personal management style. Coldwar.html. As of December 31, 2014, I retired from full-time teaching in Humboldt State University's Department of History. 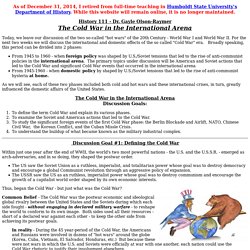 While this website will remain online, it is no longer maintained. History 111 - Dr. Speech: Recommendation for assistance to Greece and Turkey - 12 March 1947. Recommendation for assistance to Greece and Turkey by the Presisent of the United States, Harry Truman The gravity of the situation which confronts the world today necessitates my appearance before a joint session of the Congress. The foreign policy and the national security of this country are involved. One aspect of the present situation, which I wish to present to you at this time for your consideration and decision, concerns Greece and Turkey. The United States has received from the Greek Government an urgent appeal for financial and economic assistance. Truman Doctrine. Truman Doctrine Mr. President, Mr. 1945–1952. Atomic diplomacy refers to attempts to use the threat of nuclear warfare to achieve diplomatic goals. After the first successful test of the atomic bomb in 1945, U.S. officials immediately considered the potential non-military benefits that could be derived from the American nuclear monopoly.

In the years that followed, there were several occasions in which government officials used or considered atomic diplomacy. Atomic bombing of Nagasaki on August 9, 1945. 1945–1952. The United States emerged from World War II as one of the foremost economic, political, and military powers in the world. Wartime production pulled the economy out of depression and propelled it to great profits. In the interest of avoiding another global war, for the first time the United States began to use economic assistance as a strategic element of its foreign policy and offered significant assistance to countries in Europe and Asia struggling to rebuild their shattered economies. British Prime Minister Winston Churchill and President Harry Truman at the famous “Iron Curtain” Speech. Kennan and Containment, 1947 - 1945–1952. , a career Foreign Service Officer, formulated the policy of “containment,” the basic United States strategy for fighting the cold war (1947–1989) with the Soviet Union.

Kennan’s ideas, which became the basis of the Truman administration’s foreign policy, first came to public attention in 1947 in the form of an anonymous contribution to the journal Foreign Affairs, the so-called “X-Article.” “The main element of any United States policy toward the Soviet Union,” Kennan wrote, “must be that of a long-term, patient but firm and vigilant containment of Russian expansive tendencies.” Map: Cold War Alliances. Pinterest.com.

In January of 1961, as John F. Did the Cold War ever really end? Illustration by Davide Bonazzi. The rise and fall of the Berlin Wall - Konrad H. Jarausch. The Cold War Timeline Infographic - VFW Southern Conference. Tschida - Cold War. Berlin Wall: How the Wall came down, as it happened 25 years ago.

National Cold War Exhibition. January 11 Jan - A ceasefire was announced in Greece between government forces and ELAS guerrillas; this agreement was confirmed by the government on 12 February. 4 Feb - Yalta Conference where Roosevelt, Churchill and Stalin meet to discuss terms of German surrender and the boundaries and governments in post war Eastern Europe. 12 Apr - President F D Roosevelt dies and is succeeded by Harry S Truman. The Presidency and the Cold War. Nato-ag. The Cold War: The Geography of Containment. The Berlin Airlift: “We are going to stay, period.” Cold War Era spy tools.