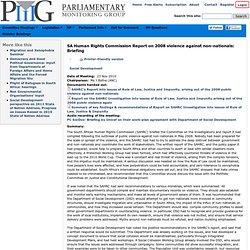 She noted that nobody had been prepared for the scale and rapid spread of the violence, and the SAHRC itself had difficulties because this was the first time it had ever been confronted with a human rights crisis of such proportions. Although the SAHRC was a small body with limited resources, it had played a role in bringing parties together. There was initially deep distrust between non-nationals and government, and the non-nationals looked to the SAHRC for assistance, instead of to government.

'Kill the bastards' South African police advised. Hrc-report.pdf (application/pdf Object) “Keep Your Head Down” South Africa: UNHCR condemns xenophobic violence in Western Cape. Briefing Notes, 20 November 2009 This is a summary of what was said by UNHCR spokesperson Andrej Mahecic – to whom quoted text may be attributed – at the press briefing, on 20 November 2009, at the Palais des Nations in Geneva. 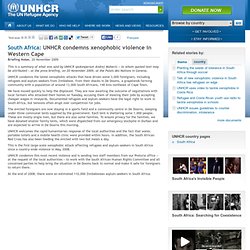 UNHCR condemns the latest xenophobic attacks that have driven some 3,000 foreigners, including refugees and asylum-seekers from Zimbabwe, from their shacks in De Dooms, a grapelands farming community with a population of around 13,000 South Africans, 140 kms northeast of Cape Town. We have moved quickly to help the displaced. Mandela Day appeal draws apology for xenophobic attacks in South Africa. 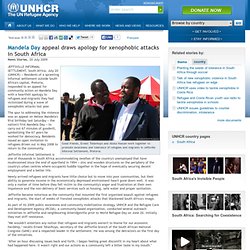 JEFFSVILLE INFORMAL SETTLEMENT, South Africa, July 20 (UNHCR) – Residents of a sprawling informal settlement outside South Africa's capital, Pretoria, responded to an appeal for community action on Mandela Day with a heartfelt apology to refugees and migrants they had victimized during a wave of xenophobic attacks last year.

The spur to addressing the violence was an appeal on Nelson Mandela's 91st birthday last Saturday – the nation's first Mandela Day – to carry out 67 minutes of goodwill, symbolizing the 67 years he worked for democracy. Residents issued an open invitation to refugees driven out in May 2008 to return to the community. "After an hour discussing issues back and forth, I began feeling great discomfit in my heart about what had happened here. Talk of new xenophobic violence in South Africa has refugees on edge. News Stories, 6 July 2010 © UNHCR/P.Rulashe Dolebo Debisto initiates JRS staffer Josephine Namata in the art of eating an Ethiopian meal. 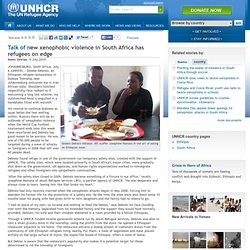 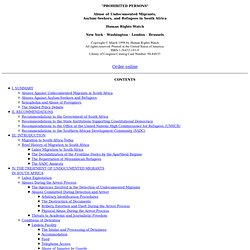 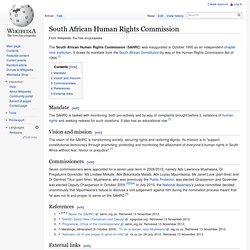 It draws its mandate from the South African Constitution by way of the Human Rights Commission Act of 1994.[1] Mandate[edit] Top UN official lauds South Africa’s ‘progressive’ refugee policy. 27 August 2007 – United Nations High Commissioner for Refugees (UNHCR) António Guterres has commended the South African Government for its progressive policy on refugees and asylum seekers, including a commitment to ensure their access to basic services. 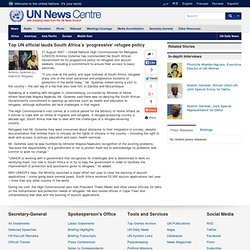 "If you look at the policy and legal statutes of South Africa, refugees enjoy one of the most advanced and progressive systems of protection in the world today," Mr. Guterres stated during a visit to the country – the last leg of a trip that also took him to Zambia and Mozambique. Speaking at a meeting with refugees in Johannesburg, co-hosted by Minister of Home Affairs Nosiviwe Mapisa Nqakula, Mr. Guterres said there was no denying the South African Government's commitment to opening up services such as health and education to refugees, although authorities did face challenges in that regard. Refugees told Mr. Mr. "UNHCR is working with a government that recognizes its challenges and is determined to work on rectifying them. Home. Speech by the Chairerson Human Rights Day. SPEECH DELIVERED BY THE SAHRC CHAIRPERSON ADV LAWRENCE MUSHWANA DURING THE 2011 HUMAN RIGHTS DAY CELEBRATIONS HELD AT ATHLONE STADIUM ON MONDAY, MARCH 21st Ladies and Gentlemen, today is Human Rights Day, a day in which we take stock of the progress we are making in our efforts to promote, develop and protect human rights in our country since the dawn of democracy in 1994. 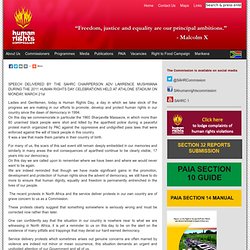 On this day we commemorate in particular the 1960 Sharpeville Massacre, in which more than 60 unarmed black people were shot and killed by the apartheid police during a peaceful protest march organized by PAC against the oppressive and undignified pass laws that were enforced against the will of black people in this country. It was a law that made them pariahs in their country of birth. For many of us, the scars of this sad event still remain deeply embedded in our memories and similarly in many areas the evil consequences of apartheid continue to be clearly visible, 17 years into our democracy.

Xenophobia in South Africa. Prior to 1994 immigrants from elsewhere in Africa faced discrimination and even violence in South Africa, though much of that risk stemmed from the institutionalised racism of the time due to apartheid. After democratisation in 1994, contrary to expectations, the incidence of xenophobia increased.[1] Between 2000 and March 2008 at least 67 people died in what were identified as xenophobic attacks. In May 2008 a series of riots left 62 people dead; although 21 of those killed were South African citizens.

The attacks were apparently motivated by xenophobia.[2] Xenophobia in South Africa before 1994[edit] Against East and Southern European immigrants[edit] Restrictions on immigration can be traced back to the Union of South Africa, with the different states adopting different policies on foreigners. Against Mozambican and Congolese immigrants[edit] South African riots: Nowhere left to go. South Africa failing people displaced by xenophobia riots. The xenophobia riots in South Africa displaced tens of thousands of people, many of whom are in temporary camps, and are being cared for by non-governmental organisations as the initial emergency treatment phase shifts to more complex trauma counselling. Clare Kapp reports. Xenophobic attacks in South Africa have forced tens of thousands of people from their homes and shattered the reputation of the “rainbow nation” which preached racial harmony after years of apartheid.

Françoise Kanyamuneza used to enjoy her work at a busy hospital in Cape Town, helping to plug the gap left by the exodus of South African health workers from the public sector. Department of Home Affairs. Minister of Home Affairs (South Africa) South Africa UNHCR Profile. | Overview | Working environment South Africa is party to the 1951 Refugee Convention and its 1967 Protocol, as well as to the 1969 OAU Convention.

The country has a liberal asylum legislation that incorporates all basic principles of refugee protection including freedom of movement, the right to work and access to basic social services. However, refugees are not always able to fully enjoy these rights because some public institutions do not recognize their permits.Refugees reside mainly in urban areas, spread across the country, making it challenging to reach those most in need.Despite being a middle-income country, South Africa faces challenges with unemployment, service delivery, poverty and economic inequality, which puts refugees and asylum-seekers in competition with host populations.South Africa is a major destination country for asylum-seekers as well as migrants and others looking for better economic and social opportunities.