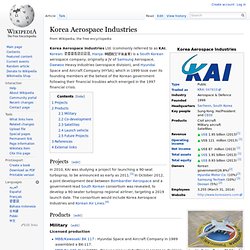 (commonly referred to as KAI, Korean: 한국항공우주산업, Hanja: 韓國航空宇宙産業) is a South Korean aerospace company, originally a JV of Samsung Aerospace, Daewoo Heavy Industries (aerospace division), and Hyundai Space and Aircraft Company (HYSA), which in 1999 took over its founding members at the behest of the Korean government following their financial troubles which emerged in the 1997 financial crisis. Projects[edit] KAI 한국항공우주산업주식회사. InvestKorea. The current market size of the aerospace and defense industry is approximately US$600 billion, and is expected to double in size to US$1,200 billion by 2020. 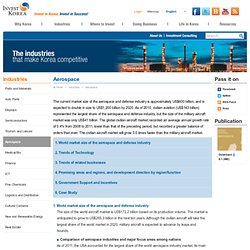 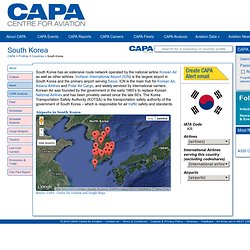 There are great differences in the performances of Asian and North American airlines, just as regulatory variances between their respective governments influence growth rates. Today round two in the battle for the trans-Pacific market has begun. In the last decade ultra-long-haul non-stops by Thai Airways and Singapore Airlines, were introduced – and each withdrawn recently. Over the past decade the trans-Pacific duelling was among North and Southeast Asian airlines, as their North American airline peers remained preoccupied with bankruptcy, followed by consolidation. Rapid expansion will continue to impact yields and profits negatively, but airlines will remain focused on the long term. 16-Jul-2014 12:35 PM 26-Jun-2014 9:50 AM. 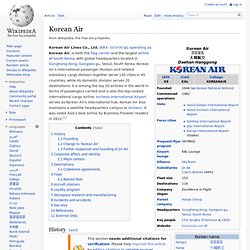 (KRX: 003490), operating as Korean Air, is both the flag carrier and the largest airline of South Korea, with global headquarters located in Gonghang-dong, Gangseo-gu, Seoul, South Korea. Korean Air's international passenger division and related subsidiary cargo division together serve 130 cities in 45 countries, while its domestic division serves 20 destinations. It is among the top 20 airlines in the world in terms of passengers carried and is also the top-ranked international cargo airline. Incheon International Airport serves as Korean Air's international hub. Korean Air also maintains a satellite headquarters campus at Incheon. History[edit] Polar Air Cargo. 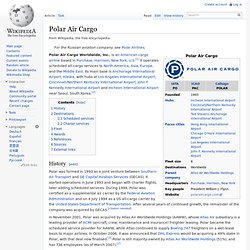 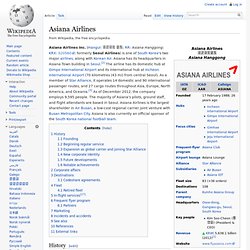 (Hangul: 아시아나 항공; RR: Asiana Hanggong; KRX: 020560; formerly Seoul Airlines) is one of South Korea's two major airlines, along with Korean Air. Asiana has its headquarters in Asiana Town building in Seoul.[2] The airline has its domestic hub at Gimpo International Airport and its international hub at Incheon International Airport (70 kilometres (43 mi) from central Seoul).