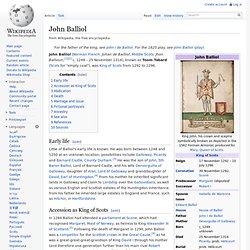 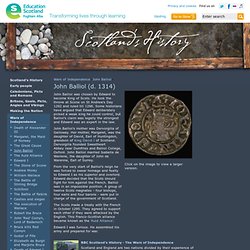 He took the throne at Scone on St Andrew's Day 1292 and ruled till 1296. Some historians have argued that Edward deliberately picked a weak king he could control, but Balliol’s claim was legally the strongest and Edward was an expert in the law. John Balliol’s mother was Dervorgilla of Galloway. Her mother, Margaret, was the daughter of David, Earl of Huntingdon, grandson of King David I of Scotland. Dervorgilla founded Sweetheart Abbey near Dumfries and Balliol College, Oxford. From the very start of Balliol’s reign he was forced to swear homage and fealty to Edward I as his superior and overlord. The Scots made a treaty with the French in October 1295. Edward I was furious. John de Baliol. John de Baliol (1249 - 1315, king 1292 - 1296) was the son of the founder of Baliol College, Oxford. 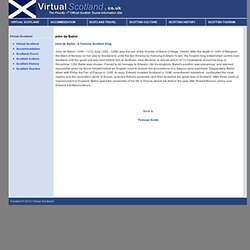 After the death in 1290 of Margaret the Maid of Norway on her way to Scotland to unite the two thrones by marrying Edward I's son, the English king established control over Scotland until the great suit was held before him ar Northam, near Berwick, to decide which of 13 contestants should be king. In November 1292 Baliol was chosen. Forced to do homage to Edward I for his kingdom, Baliol's position was precarious, and seemed impossible when he found himself before an English court to answer the accusations of a Gascon wine merchant. Desperately, Baliol allied with Philip the Fair of France in 1295. Events - John Balliol and Edward I - Higher Scottish History. Overview of King John Balliol. Claimants. THE CLAIMANTS and COMPETITORS. 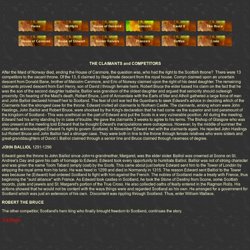 King John. King John was the last Scottish monarch to be crowned in Scotland on the Stone of Destiny. 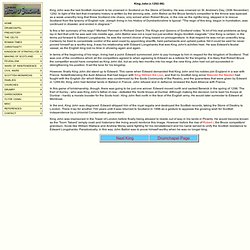 He was crowned on St. Andrew's Day, (30th November) 1292. In light of the fact that invariably history is written by the winning side, John Bailiol as the Bruce family's competitor to the throne was typecast as a weak unworthy king that threw Scotland into chaos, only solved when Robert Bruce, in the role as the rightful king, stepped in to rescue Scotland from the tyranny of English rule. The Scottish Wars of Independence: John Balliol vs. Edward I.

The Battle of Dunbar Edward did not hear of the Scottish-French Alliance until July 1296, but it mattered not, invasion was already on his mind. 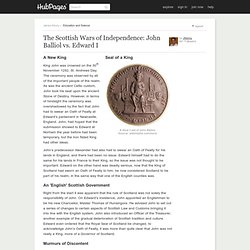 In March of that year, he crossed the River Tweed, approaching his first obstacle, the border town of Berwick, surrounded by high city walls. The Scottish defenders had fortified the town as best they could. Edward offered the defenders the chance to surrender in exchange for their lives; the offer was scorned and refused, the defenders all too aware what a promise of Edward’s amounted to. The English attacked; the Scottish valiantly held on for three days, before being overwhelmed by Edward’s forces. John Balliol Feature Page on Undiscovered Scotland. John I king of Scotland also known as Toom Tabard. John Balliol was born in 1248. 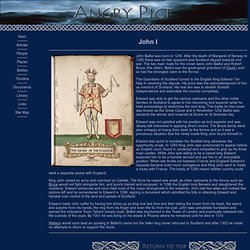 After the death of Margaret of Norway in 1290 there was no heir apparent and Scotland slipped towards civil war. John Balliol. The death of Scottish king, Alexander III, from a riding accident on 19 March 1286, left Scotland without a king. 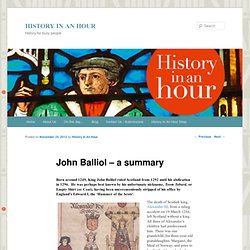 All three of Alexander’s children had predeceased him. There was one grandchild, his three-year-old granddaughter, Margaret, the Maid of Norway, and prior to his death, Alexander had made efforts to have Margaret recognised as his legitimate heir to the Scottish throne. This would have secured his dynastic line, but fate had one more card to play against the unfortunate Alexander. During the crossing from Norway to Scotland in 1290, the young Margaret took ill and died. Thus came down the curtain on a golden age for Scotland. Political Void and the Ragman Rolls The disastrous deaths of Alexander and his heirs in such a short space of time left Scotland with a power vacuum and several candidates willing to fill it.

Edward insisted on the loyalty of the Scottish nobles, landowners and other influential people by making them swear an oath of loyalty to him. Berwick. John Balliol. King John Balliol of Scotland. Books & Posters House of Balliol Family Tree Detailed Tree English King or Queen at the Time Name: King John Balliol of ScotlandFather: John BalliolMother: Devorguilla of GallowayHouse of: BalliolBorn: c. 1240 at Barnard CastleAscended to the throne: November 17,1292Crowned: November 30, 1292 at Scone Abbey, PerthshireMarried: Isabella, daughter of John de Warenne, 1281Died: 1313/14, in NormandyBuried at: Church of St Waast, NormandySucceeded by: Interregnum. 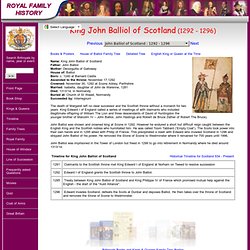 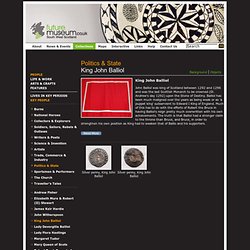 To add further insult most lost their lands, Bruce needed major areas controlled by his own supporters, and dished out these lands to those closest to him. The Soulis family for instance, who had been one of the most powerful and influential families in south west Scotland was all but wiped out. In Bruce's biography by John Barbour, even the figure of William Wallace has been omitted. Wallace had fought in Balliol's name and therefore it did Bruce no favours to remind people of his contribution to the struggle for Scottish Independence. John de Balliol, King of Scots (c.1249 - 1314. John de Balliol (c. 1249 – c. 25 November 1314) was elected King of Scots from 1292 to 1296.

John Balliol (c. 1249 – c. 25 November 1314) was King of Scots from 1292 to 1296. Early life Little of John's early life is known. John Baliol, King of Scotland. John Balliol in History Being the fourth and youngest son of a minor Scottish lord, it was not expected that John Balliol would ever amount to anything significant, let alone become King of Scotland. But with the deaths of his father (1268) and his three elder brothers (by 1278), John was now in a position of power. He inherited his father's lands but still did not possess any kind of great wealth, as his mother kept her own inheritance and dowry.

This Day in Scottish History: The Abdication of John Balliol « The World of the Blue Bells Trilogy. Once again, we have a winner! An e-mail has been sent out to the winner of the Freedom Hop. July 10 is a date that was to have great impact on the Scottish Wars of Independence. Scott Introduction. Dervorgilla of Galloway (abt 1214- abt 1288) « Women's History Network Blog. Dervorgilla of Galloway was a thirteenth century noblewoman of a prestigious lineage. Her Scottish relatives were major landowners in the South of Scotland. Horrible Histories - King John Balliol.