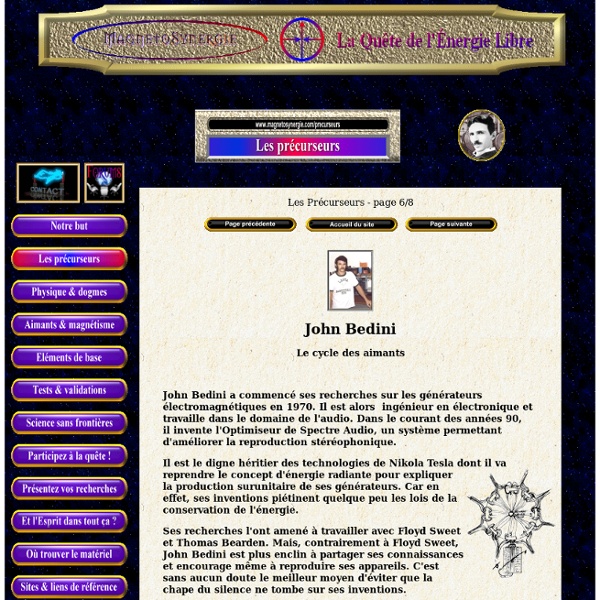 John Bedini SCHÉMAS MOTEUR ET NOTES DE LABORATOIRE de l'Encyclopédie de l'énergie libre, energy21.org, de l'énergie 21 org, Geoff Egel The lab notes and diagrams on this page were built by John Bedini and Ron Cole. The theory is all Tom Bearden's, and comes out of the book "TOWARD A NEW ELECTROMAGNETICS PART 4: VECTORS AND MECHANISMS CLARIFIED" The circuit diagrams that are in this section are for people with electronic backgrounds. Some of the parts are outdated and will need to be replaced." Copyright 1996 John Bedini Home Page This page copied from of John Bedini Motor Diagrams And Lab Notes web page email John Bedini Check some of these pages from our other webpages at this website Hamel Searl disk electrification process Hamel mini ufo flying disk construction detials Photos of the Hamel from previous page Bedini free energy generator Bedini Ideas and motors Experiments with a Kromrey and Brandt converter built by John Bedini John Bedini energy machine pictures The Tesla switch The Hamel magnetic gate as built by John Bedini

Bedini Motors FREE ENERGY GENERATION-Circuits a Schematics-John Bedini and Torn Bearden(1984-2004) FOREWORD (Tom Bearden - April 13, 1984) John Bedini has a prototype free energy motor. Imagine having a small D.C. electrical motor sitting on your laboratory bench powered by a common 12-volt battery. Imagine starting with a fully charged battery and connecting it to the motor with no other power input. Obviously, the motor is going to run off the battery, but by conventional thinking it will stop when the battery runs down. Impossible, you say. It isn't running by the conventional wisdom of electrical physics. And it isn't something complex. It's running off the principles of electromagnetics that Nikola Tesla discovered shortly before 1900 in his Colorado Springs experiments. It's running off the fact that vacuum space-time it-self is nothing but pure massless charge. First we will need a big accumulator to hold a lot of the charged ions in the system that we wish to shock into oscillation. An ordinary battery filled with electrolyte fits the bill nicely. Look at it this way.

John Bedini loads one of his monopole motors John Bedini loads one of his monopole motors Excerpted from the upcoming ENERGY FROM THE VACUUM Documentary Series Porte magnétique de Bedini John Bedini's Magnetic Gate - 02/25/97 The following diagram was drawn up by John Bedini and courteously shared with KeelyNet after experimenting with David Hamel's Magnetic Spinner. Click HERE for more information about John's experiment with this phenomenon. John believes this is a probable motor force which is currently under investigation. On a personal note, in an earlier file (BEDHAM1.HTM) I said in an email to John that I had not been able to get mine working. I am still experimenting with various versions as time allows and it is MOST INTRIGUING to witness this. The idea of simulating Hamel's large ring magnet by using multiple small magnets mounted inside a PVC or ABS pipe makes it simple for ANYONE to experiment with this. For more information regarding John's research efforts,check out For more info on Hamel in general, check out THIS PAGE. Click HERE to read about David Hamel's experiences.

John Bedini's Cigar Box-sized Tesla Switch - How To Build It At the symposium, Bedini demonstrated an inexpensive, cigar-box sized Tesla-type converter witch he had recently built. Throughout the demonstration, which lasted a full 24 hours during the symposium, a constant load was being drawn out of the system to do work, Nevertheless, the converter kept the nickel-cadmium batteries fully charged! The concept, witch had been originated by Nikola Tesla, was given to John Bedini by Ronald Brandt, who was a personal friend of Nikola Tesla. Brandt is reputed to have a similar converter which he has used for years without loosing the battery charge. Bedini presented the schematic diagram showing how to build the solid-state device, and then released copies of the schematic diagram. This Diagram Was used by John Bedini to test the Tesla Switch Good Luck John Bedini (c)

Zéro Point Energy - John Bedini Générateur Solid State - 2007 sur les OMD MDG's website is divided in parts, with direct access through click on the following banners: xxxxxxx ZPE index - Map xxxxxxx Bedini: Perpetual Motor - Solid State - Energizers 1 - Energizers 2 - Monopoles - Theory - Patents - Energenx Inc. ## Bedini's Solid State Free Energy Generator (page created June 2007, last updated November 2007) ## Bedini's Oscillator Charger is based on a classic 'self oscillating' double coil circuit, by MDG This kind of circuit, oscillating automaticaly, will create continuous sequences of ON and OFF magnetic fields in the coil arrangement ; then, each collapsing of these magnetic fields will induce a Back Electromotive Force in the third coil, wound together and of same length. It works ! It has taken 20 years to see this kind of charger on sales, but now it is available through the company ENERGENX (see article below) that exploites John Bedini's patent. (To link the article above use: #BSP1 ) Levitation to the top zpe_bedini_mdg_solid_charger.gif Oh ! ...

Hear Ye! Hear Ye! John Bedini Unveils His Latest Free-Energy Motor John Bedini debuts his new 14ft. high modified Bedini Cole Monopole motor at the 2010 Renaissance Charge Conference in Coeur d’Alene, Idaho November 14th in tribute to Tom Bearden and his upcoming 80th birthday. Col. Tom Bearden is a pioneer in free-energy research. Bedini is developing working equipment that taps into radiant energy from the vacuum. This is not Bedini’s first free-energy motor, but his latest. Here is an article that Bedini mounted to another site which explains how anyone can build a simple free-energy motor. Special thanks to all the groups who kept the faith. Tom Bearden 1984 Simple Free Energy Motor On this slide, we show a theoretical scheme which several researchers have discovered and used to build simple free energy motors. In this scheme, we drive an ordinary d.c. series motor by a two wire system from an ordinary battery. To do this, recall that a charged particle in a “hooking” del-phi river moves itself.

Le cigare de John Bedini Box taille Tesla Switch - How To Build It - Le Optimiste Vert At the symposium, Bedini demonstrated an inexpensive, cigar-box sized Tesla-type converter witch he had recently built. Throughout the demonstration, which lasted a full 24 hours during the symposium, a constant load was being drawn out of the system to do work, Nevertheless, the converter kept the nickel-cadmium batteries fully charged! The concept, witch had been originated by Nikola Tesla, was given to John Bedini by Ronald Brandt, who was a personal friend of Nikola Tesla. Brandt is reputed to have a similar converter which he has used for years without loosing the battery charge. This Diagram Was used by John Bedini to test the Tesla Switch Good Luck John Bedini (c) John Bedini Helps Progress Toward New Energy Future - The Venus Project Foundation, an arts, sciences and educational, non-profit 501(c)(3), national organization - By Jeane Manning (Nov. 2011) The international network of “free energy” researchers is entering an exciting era, with rapid expansion of knowledge about new and rediscovered science. For instance, legendary inventor John Bedini recently attended an energy conference for the first time in a quarter-century, and he and colleague Peter Lindemann taught attendees some key principles of making fuelless energy systems. Meanwhile mainstream experts in electrical engineering theory may face embarrassing moments in the future unless they have the humility to learn about what is possible in an open, rather than closed, thermodynamic system. The emerging field of research called “Tesla’s Impulse technology” and its variation labeled “Bedini technology” are bypassing textbooks that ignore open systems. If you ask Bedini, “What’s an open system?” He decided to help others by providing circuit drawings and specifications, so he wrote a small book. California is an oil-industry state.