Meet Generation Z: Forget Everything You Learned About Millennials 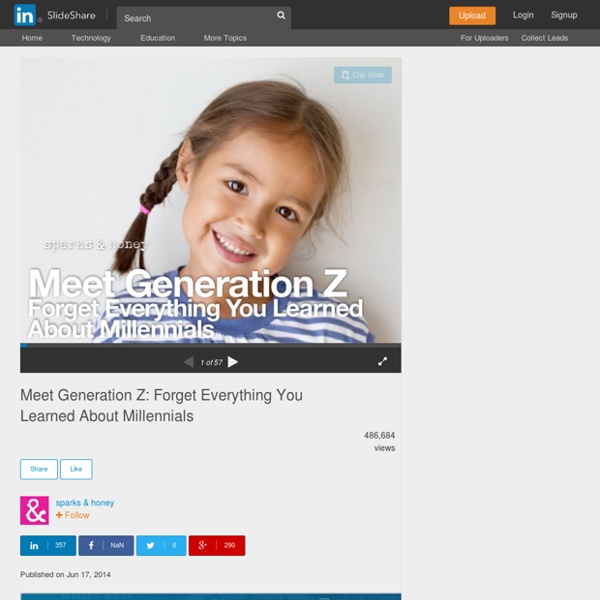 6 Toxic Behaviors That Push People Away: How To Recognize Them In Yourself and Change Them Productivity Hacks From Startup Execs How To Motivate Yourself: 3 Steps Backed By Science You make goals… but then you procrastinate. You write a to-do list… but then you don’t follow through. And this happens again and again and again. Seriously, what’s the problem? Why are we so good at thinking of what to do but so terrible at actually doing those things? The problem is you’re skipping an essential step. The Mistake Every Productivity System Makes Productivity systems rarely take emotions into account. We can’t ignore our emotions. And we can’t fight our feelings. Via The Antidote: Happiness for People Who Can’t Stand Positive Thinking: …when experimental subjects are told of an unhappy event, but then instructed to try not to feel sad about it, they end up feeling worse than people who are informed of the event, but given no instructions about how to feel. So what does the unavoidable power of feelings mean for motivation? In their book Switch, Chip and Dan Heath say that emotions are an essential part of executing any plan: Focus on emotions. 1) Get Positive It’s optimism.

How to Pack an Emergency Kit Like a Spy Plane Pilot Transcend Class 10 128GB SD Card price Screen-reader users, click here to turn off Google Instant. About 117,000 results SponsoredBased on your search query, we think you are trying to find a product. Clicking in this box will show you results from providers who can fulfill your request. Google may be compensated by some of these providers. Provider updates to information may be delayed, therefore users should check the provider's site for the most up to date information. Shop for Transcend Class 10 128... on Google Search Results Transcend 128GB SDXC Ultimate 600x Class 10 UHS-1 ...www.memorymania.com.au/transcend-128gb-sdxc-ultimate-600x-class-...Transcend 128GB SDXC 600x Class 10 UHS-1 90MB/s Memory Card ...

Awakening the Aussie Ford Six - Part Two In Part One of this series we looked at the differences in engines used from the EA to AU Falcon. Jim and Brendan Mock from J.M.M. (Jim Mock Motorsport) suggested the best platforms for tuning are the EF and EL Falcon as well as the Tickford XR6. Now let’s look at approaches to modification... Exhaust and Headers Jim Mock says the best place to start modification on a Falcon six is the exhaust system. "The standard exhaust system on the Falcon ranges between about 1¾ to 2 inches diameter for most of its length," says Jim. J.M.M. offers a number of off-the-shelf Falcon upgrades (which we’ll come to) and all use a collector-back 2½ inch mandrel bent pipe. "On a car making 170kW at the wheels our full-length exhaust causes only a 2kW restriction compared to having no exhaust at all," says Jim. Note that the Falcon is also very sensitive to muffler selection - resonances and excessive noise are common in custom exhaust fabrications. And what about the exhaust manifold, you ask? Air Intake

Photo Essay - Replacing Front Control Arm Bushes - Version 2.0 - Suspension and Handling - Ford XR6 Turbo.com Photo Essay - Replacing Front Control Arm Bushes - version 2.0 I posted a thread back in 2012 about replacing front control arm bushes. I had a mechanic do the job for me, and I took a few photos whenever I could. Now I'm finally going to have a proper go at it. When Ford designed the BA Falcon it pursued higher levels of comfort over what was in the AU. One of these areas was the front suspension and braking system. Even if the car has relatively low km on it, rubber cracks and dry rots over time. Symptoms of worn control arm bushes: - Overall sloppy feel in the front end and just a floaty/bad/dangerous feeling. - Premature tyre wear in the insides of the tyres. - Premature warping of the brake discs. With my taxi and my girlfriend’s taxi, we’ve been taking them to a suspension workshop and had the bushes replaced there. It turned out that replacing the control arms actually isn’t all that difficult. Deb’s taxi was urgent though.

eLearning to Learn | A great WordPress.com site Rewordify.com | Understand what you read Sweet Search Sesame Smart Lock Preview It's no surprise that we're seeing new connected locks emerge in 2015. The recent boom in smart security options has opened the door for a new generation of smart locks, and with early contenders like Lockitron and Goji stumbling out of the gate, many consumers are still waiting for more options. That's where Sesame hopes to come in. With the exception of that knocking trick, that pitch sounds an awful lot like the August Smart Lock -- but the two part ways when it comes to pricing. One problem with Bluetooth smart locks is that you need to be in fairly close range in order to use them. With that Wi-Fi extender plugged in somewhere in your home, you'll be able to lock and unlock the door remotely no matter where you are. Design-wise, the Sesame is a little smaller than August, and about half the size of the original Lockitron design (a newer, smaller "Lockitron Bolt" design is currently in the works too).