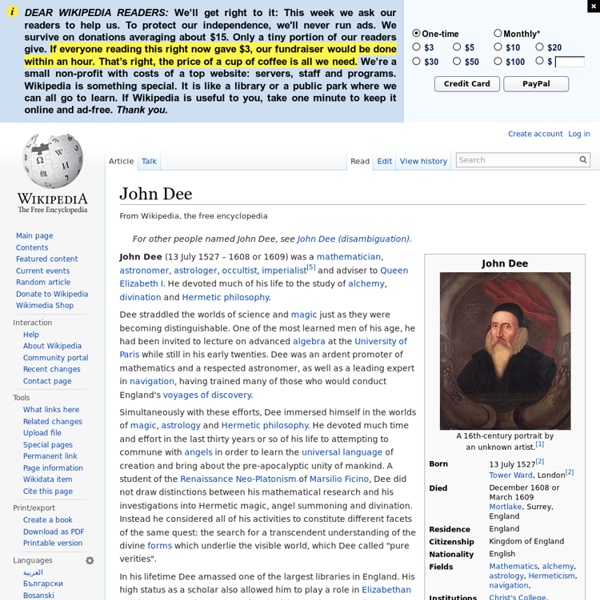 John Dee (13 July 1527 – 1608 or 1609) was a mathematician, astronomer, astrologer, occultist, imperialist[5] and adviser to Queen Elizabeth I. He devoted much of his life to the study of alchemy, divination and Hermetic philosophy. In his lifetime Dee amassed one of the largest libraries in England. His high status as a scholar also allowed him to play a role in Elizabethan politics. He served as an occasional adviser and tutor to Elizabeth I and nurtured relationships with her ministers Francis Walsingham and William Cecil. Dee also tutored and enjoyed patronage relationships with Sir Philip Sidney, his uncle Robert Dudley, 1st Earl of Leicester, and Edward Dyer. Biography[edit] Early life[edit] Later life[edit] By the early 1580s, Dee was growing dissatisfied with his progress in learning the secrets of nature and with his own lack of influence and recognition. Final years[edit] Personal life[edit] Dee was married three times and had eight children. Achievements[edit] Thought[edit]

Edward Kelley English alchemist Legends began to surround Kelley shortly after his death. His flamboyant biography, his relationships with Queen Elizabeth I's royal magus Sir John Dee and the Emperor Rudolf II, and his claims of great alchemical skill and the ability to communicate with angels have all led to his relative notoriety among historians. This has made him (along with the German Faustus and Sir John Dee himself) one source for the folklorical image of the alchemist-medium-charlatan. Biography[edit] Birth and early career[edit] How much does it matter whether God exists? — Aeon O... Alan/Flickr Two rooms, in two different cities, but pretty much the same scene: one man stands before a few dozen supporters, many of them middle-aged white males, plus a smaller, precocious cohort in early adulthood. As the man speaks, they interrupt him with good, earnest, detailed questions, which he ably answers more or less to their satisfaction. These crowds crave the intricacies of arguments and the upshots of science.

Inês de Castro Inês de Castro (Portuguese pronunciation: [iˈneʃ dˈkaʃtɾu]; in Castilian: Inés; 1325 – 7 January 1355) was a Galician noblewoman best known as lover and posthumously-recognized wife of King Peter I of Portugal. The dramatic circumstances of her relationship with Peter (at the time Prince of Portugal), which was forbidden by his father King Afonso IV, her murder at the orders of Afonso, Peter's bloody revenge on her killers, and the legend of the coronation of her exhumed corpse by Peter, have made Inês de Castro a frequent subject of art, music, and drama through the ages. Biography[edit] Inês was the natural daughter of Pedro Fernández de Castro, Lord of Lemos and Sarria, and his noble Portuguese mistress Aldonça Lourenço de Valadares.[1] Her family descended both from the Galician and Portuguese nobilities.

PN Review Online Poetry Literary Magazine - The Freezing Coachman: some reflections on art and morality - Raymond Tallis - PN Review 96 Tolstoy tells the story of an aristocratic woman at the theatre weeping at the imaginary tragedy enacted on the stage. At the same time, outside in the cold, a real tragedy is taking place: her old and faithful coachman, awaiting her in the bitter winter night, is freezing to death. The point of the story is obvious: art does not necessarily make people better behaved, or more considerate. The dissociation between art and good behaviour angered Tolstoy and, in What is Art?, he savagely attacked what he perceived as the contemporary reduction of art to a mere amusement, recreation or opiate for the leisured classes. Against this, he asserted that 'art should be an organ co-equal with science for the life and progress of mankind'.

Boston Brahmin Members of the Boston upper-class society Etymology[edit] The doctor and writer Oliver Wendell Holmes, Sr. coined the term "Brahmin Caste of New England" in an 1860 story in The Atlantic Monthly.[4] The term Brahmin refers to the highest-ranking caste of people in the traditional Hindu caste system in India; by extension, it was applied in the United States to the old, wealthy New England families of British Protestant origin which became influential in the development of American institutions and culture over the course of its history. The influence of this old gentry is lesser in modern times, although some vestiges of it remain, primarily in the institutions and ideals that they championed in their heyday.[5]

“Gender is not a binary, it’s a spectrum”: some problems – More radical with age An oft-repeated mantra among proponents of the notion of gender identity is that “gender is not a binary, it’s a spectrum”. The basic idea is that what makes gender oppressive is not, as the radical feminist analysis would have it, that it is an externally imposed set of norms prescribing and proscribing behaviour to individuals in accordance with morally arbitrary biological characteristics, and coercively placing them in one of two positions in a hierarchy. Rather, the problem is that we recognise only two possible genders. Thus humans of both sexes could be liberated if we recognised that while gender is indeed an internal, essential facet of our identity, there are more genders than just “man” or “woman” to choose from.

Philosophers want to know why physicists believe theories they can’t prove — Quartz It’s often assumed that physics and philosophy are at opposite ends of the academic spectrum. In fact, they’re close—so close that they can overlap, with professors sometimes switching between the two fields as they work to advance our understanding of highly abstract subjects in theoretical physics. One such professor is Richard Dawid, a philosophy of science researcher at Ludwig Maximilian Universität Munich, who has a PhD in theoretical physics and began his career researching particle physics. He transitioned to philosophy, he tells Quartz, to investigate how physicists can come to believe in certain theories without necessarily having the empirical evidence that proves them. The criteria for establishing a theory, he discovered, is not in itself subject to scientific enquiry.

Shamsa Al Maktoum Sheikha Disappearance in 2000[edit] In summer 2000, Shamsa was in the UK on holiday with her extended family residing at their Longcross estate near Chobham in Surrey. Czeslaw Milosz: the Moralist and the Philosopher The Moralist and the Philosopher Short-story writer and philosopher Milosz’s poetry brings also thoughts of philosophical and moral character. Put in the foreground one can find the problem of the disintegration of the Universe based on religion, constant search for God and peace and inner order MAGPIETY (King Popiel and Others Poems) Savitri Devi Proponent of Nazism and Ecological Activist Savitri Devi Mukherji (born Maximiani Julia Portas, French: [mak.si.mja.ni pɔʁ.tɑ]; 30 September 1905—22 October 1982) was a French-born proponent of Nazism who served the Axis powers by committing espionage on the forces of the Allies of World War II in India.[1][2][3] She was later a leading member of the Nazi underground during the 1960s.[1][3][4] Savitri was a proponent of a synthesis of Hinduism and Nazism, proclaiming Adolf Hitler to have been sent by Providence, much like an avatar of the Hindu god Vishnu.[5] She believed Hitler was a sacrifice for humanity which would lead to the end of the Kali Yuga induced by the Jews, who she felt were the powers of evil.[3] Savitri was an associate in the post-war years of Françoise Dior,[10] Otto Skorzeny,[10] Johann von Leers,[10] and Hans-Ulrich Rudel.[10] She was also one of the founding members of the World Union of National Socialists.[2]

Syncretism Syncretism (/ˈsɪŋkrətɪzəm/) is the combining of different beliefs, while blending practices of various schools of thought. Syncretism involves the merging or assimilation of several originally discrete traditions, especially in the theology and mythology of religion, thus asserting an underlying unity and allowing for an inclusive approach to other faiths. Syncretism also occurs commonly in expressions of arts and culture (known as eclecticism) as well as politics (syncretic politics). Nomenclature[edit] The English word is first attested in the early 17th century,[1] from Modern Latin syncretismus, drawing on Greek συγκρητισμός (synkretismos), supposedly meaning "Cretan federation", but this is a spurious etymology from the naive idea in Plutarch's 1st-century AD essay on "Fraternal Love (Peri Philadelphias)" in his collection Moralia (2.490b).

How did you get from John Dee to "Lady of the Earth"? I am looking at your Picatrix information and I noticed that correlation. -- Nice to meet you here -- Keith. by keithflechas Dec 20