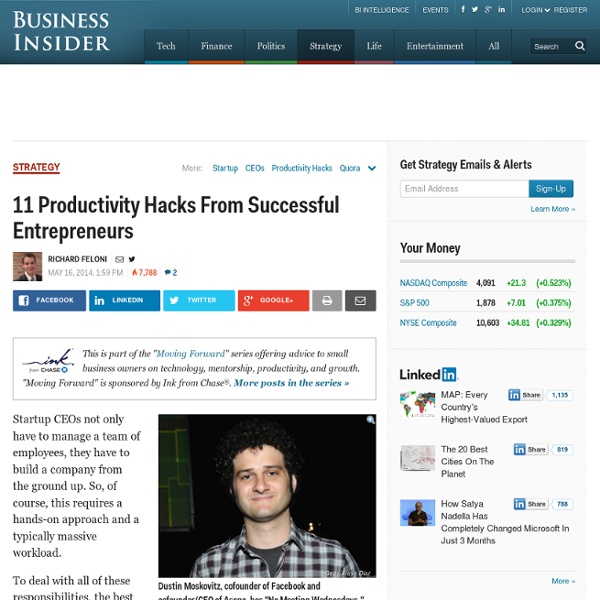 10 Laws of Productivity You might think that creatives as diverse as Internet entrepreneur Jack Dorsey, industrial design firm Studio 7.5, and bestselling Japanese novelist Haruki Murakami would have little in common. In fact, the tenets that guide how they – and exceptionally productive creatives across the board – make ideas happen are incredibly similar. Here are 10 laws of productivity we’ve consistently observed among serial idea executors: 1. A bias toward action is the most common trait we’ve found across the hundreds of creative professionals and entrepreneurs we’ve interviewed. 2. When our ideas are still in our head, we tend to think big, blue sky concepts. 3. Trial and error is an essential part of any creative’s life. To avoid ‘blue sky paralysis,’ pare your idea down to a small, immediately executable concept. 4. When working on in-depth projects, we generate lots of new ideas along the way. 5. 6. Part of being able to work on your project a little bit each day is carving out the time to do so. 7.

'A Pattern Language' by Christopher Alexander - #106 Positive Outdoor Space illustration of Christopher Alexander's 'Positive Outdoor Space' by Matt Noiseux One of the books I use in my Landscape Design Studio class in Columbia University is the classic, 'A Pattern Language' by Christopher Alexander. It offers 'patterns' as basic design templates for you to follow. These are principles of design that are founded on common sense as much as anything else....Alexander says his design language is based on human and natural considerations.....Adding to the delight it that they are numbered for easy reference in the book! One of the more elusive patterns is #106 Positive Outdoor Space. Yin / Yang anyone? The gist of this pattern says that there are two fundamentally different kinds of outdoor space: negative space and positive space. Negative outdoor space is shapeless, the formless residue that surrounds buildings .... aka 'empty space'... Positive outdoor space has a distinct and definite shape - its form is as important as the shapes of the buildings which surround it.